‘Breaking Bad’: Looking Back at the Show’s Most Powerful Moments 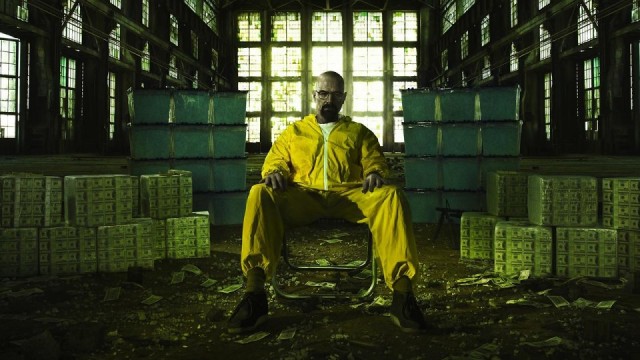 Walter White is in the empire business. | AMC

Breaking Bad is the show that just won’t die. It’s a major piece of pop culture, having first appeared on AMC back in 2008 and running all the way through 2013. The show followed the journey of Walter White, a chemistry teacher turned drug kingpin when he’s diagnosed with terminal lung cancer. The show became addicting, and creator Vince Gilligan has even utilized it to spin-off another great series in Better Call Saul.

AMC celebrated the 10-year anniversary by running several different Breaking Bad marathons in January, and we thought we should celebrate it too. Here are our top-10 most powerful, edge-of-your-seat, jaw-dropping moments in Breaking Bad history. 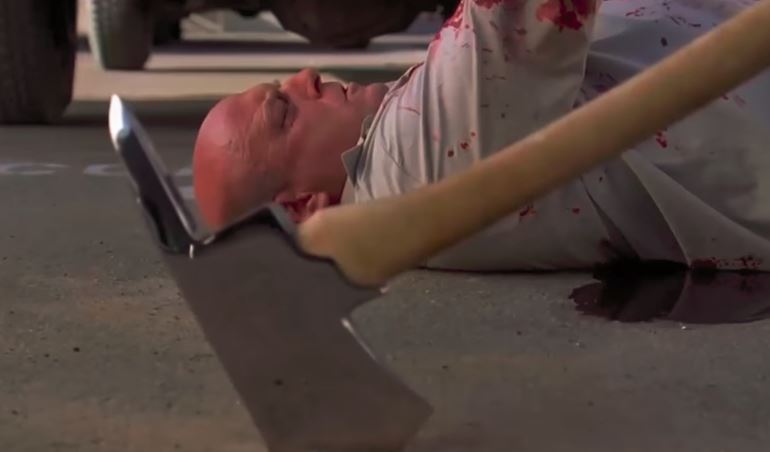 Hank has a tense showdown that leaves him in the hospital. | AMC

Season 3, Episode 7 concludes with one of the most tense scenes in television history. Hank, the DEA-agent brother-in-law of Walt, gets a brief phone call warning him that he had one minute before he would be attacked. That’s when the twins, also the nephew’s of crime lord Hector Salamanca, arrive. Leonel shoots at Hank through the back window of his SUV, but gets crushed between Hank’s car and another car. But Leonel’s brother Marco comes at Hank through the driver side window.

Hank takes several bullets, and ends up fumbling on the ground to get his last remaining bullet into the chamber before taking an ax to the head. Fortunately, he gets that shot off just in time. The cousins were done, but Hank’s recovery and the road back to even just walking on his own was just beginning. 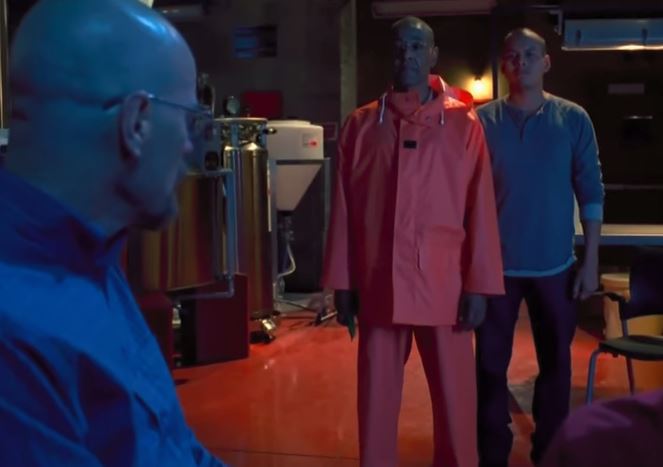 Victor flew too close to the sun. | AMC

The Season 4 premiere came with the title “Box Cutter.” As it turns out, the name was appropriate. Season 3 ended with the cliffhanger of Jesse killing Gale, Gus Fring’s meth-cook-in-training, to force Gus into a corner where he couldn’t dispatch of he and Mr. White. Obviously, Fring didn’t take this too well. Walt and Jesse were left to sit and wait for the boss to arrive in the lab while Victor, one of Fring’s henchmen, demonstrated his ability to cook the meth all on his own — having watched Walt and Jesse do it countless times.

Fring entered, silently moving about the lab with an expression that easily gave away his feelings. While Walt justified his own actions and tried to remind Fring what killing him would mean, the drug-kingpin calmly covered himself up and opened up a box cutter. But rather than attacking Walt or Jesse, he instead slashed Victor’s throat. The message was clear: Gus isn’t afraid to kill anyone. 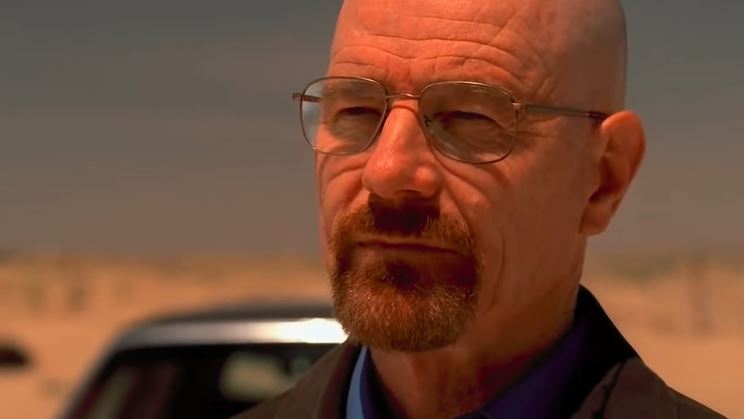 The seventh episode of Season 5 opens with Walt, Jesse, and Mike out in the desert. They’re meeting with some Phoenix-based rivals to cut a deal on selling their product, thanks to Mike’s decision to cut his losses and leave the business. Walt takes the lead, bragging over the quality of his product and casually explaining the millions of dollars in extra profit that could be made by selling his superior methamphetamine.

This leads to some classic Walt badassery. Near the end of their conversation, he has an exchange with Declan — the group’s leader — that goes something like this. 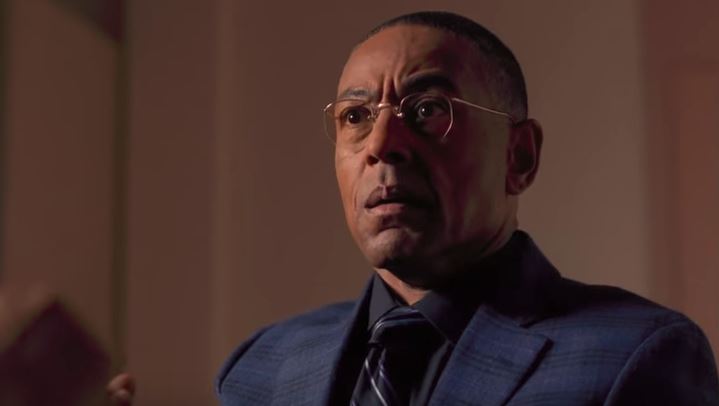 Gus got what was coming to him. | AMC

At the end of Season 4, Walt knew that Gus needed to go. Fring was cozying up to Jesse, hoping that to have the young man as his new cook would allow him to cut ties — in a manner of speaking — with Walter once and for all. Mr. White was keenly aware of what this would mean, so he put a plan into motion to dispatch of Fring first.

Although his attempt at blowing up Fring’s car went sideways, Walter finally made everything work. Through the reluctant help of Hector, who has no love for Walt either, Gus unknowingly walks right into a deadly trap. The end result is having his face blown off in the appropriately-titled season finale, “Face Off.” 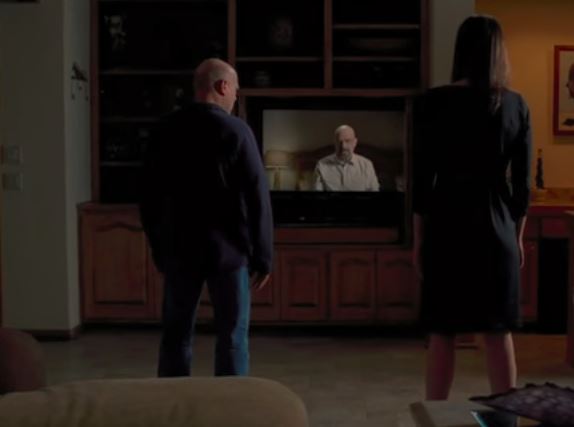 In Season 5, the biggest story line is that Hank has discovered Walt’s big secret. Having no sympathy for family, Hank is determined to take his brother-in-law to prison, even if it means tearing apart his family and ensuring that Skyler and the kids lose all the money he earned. But Walt isn’t one to be backed into a corner. He came out swinging at Hank.

Walter put together a phony confession DVD in which he admitted to his role as a meth cook, but fingered Hank as the brains of the operation. Walt cleverly pieced together a narrative that would be difficult for the DEA agent to disprove, leaving him stuck between a rock and a hard place. The entire scene is somehow dripping with both frustration and smug satisfaction. 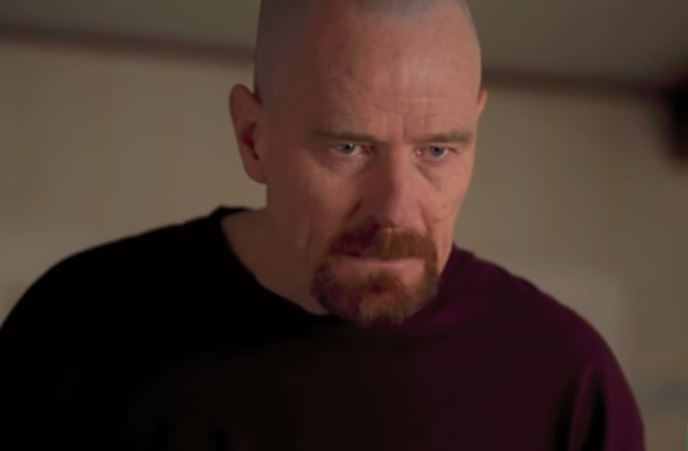 As the pressure got worse and worse as Walt got deep into the drug business, eventually he couldn’t hid his secrets from his wife, Skyler, any longer. She somewhat figured things out on her own, but slowly she became very aware of the details of Walt’s secret life. It came to a head when she learned of Gale’s death, although she had no idea what role Walt had in it. In one Season 4 episode, Skyler pleads with her husband to get out before his own life might be in danger.

Always proud, Walt was not about to hear his wife talk to him as if he could one day open the door and get a bullet to the head. He says: “I am not in danger, Skyler. I am the danger. A guy opens his door and gets shot and you think that of me? No. I am the one who knocks.” An indescribably chilling scene that is the culmination of so much of Walt’s misplaced resentment. 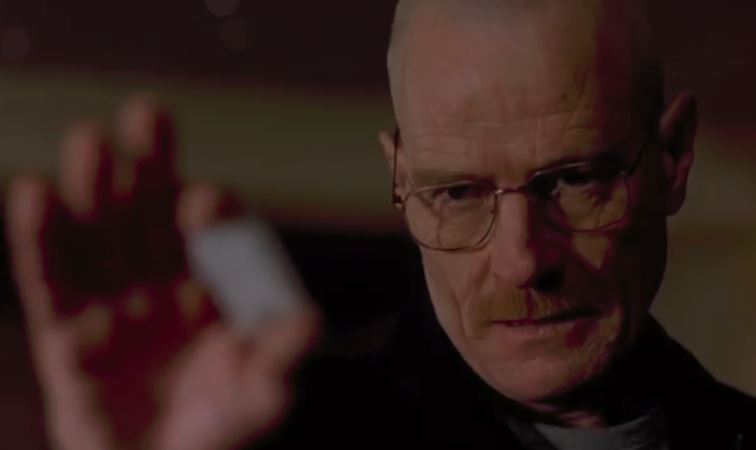 At the very end of Season 1, Walter is just now becoming wrapped in his pseudo-personality, Heisenberg. After his work associate, Jesse, gets beaten to a bloody pulp by a dealer named Tuco, Heisenberg concocts a scheme. Walter approaches the dangerous and psychotic Tuco, even entering his lair with a bag of what the dealer believes to be meth.

But, as Walter astutely points out, this is not meth. It’s actually fulminated mercury, and Mr. White destroys Tuco’s office by throwing a large chunk to the floor and causing an explosion. In the end, Walt ends up with money for the meth that was stolen, $15,000 for Jesse’s pain and suffering, and a new deal to sell his own product.

3. Lily of the valley 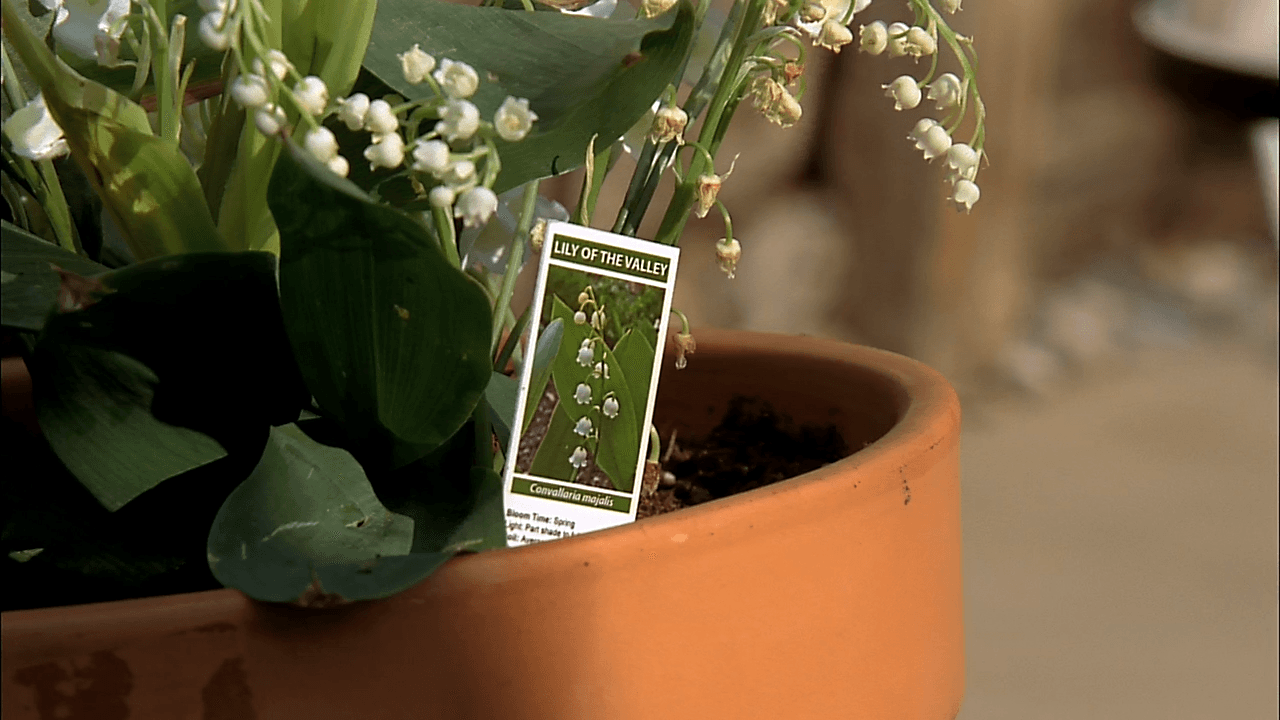 As we’ve previously mentioned, Walter needed to put a plan into action if he was to get rid of Gus Fring at the end of Season 4. He had even created some ricin, a powerful poison, and slipped it into a cigarette in Jesse’s possession to be given to Fring. But after all his previous attempts failed, Walter came up with a scheme.

Knowing that he needed Jesse on his side, Walter used a lily of the valley plant to poison the son of Jesse’s girlfriend. Although Jesse originally (and correctly) blamed Walt, he came around on the idea that it might’ve been Fring. He lent a hand in the demise of Gus, while the boy luckily made a full recovery. But we learned that Mr. White wasn’t above poisoning a child to get his way. 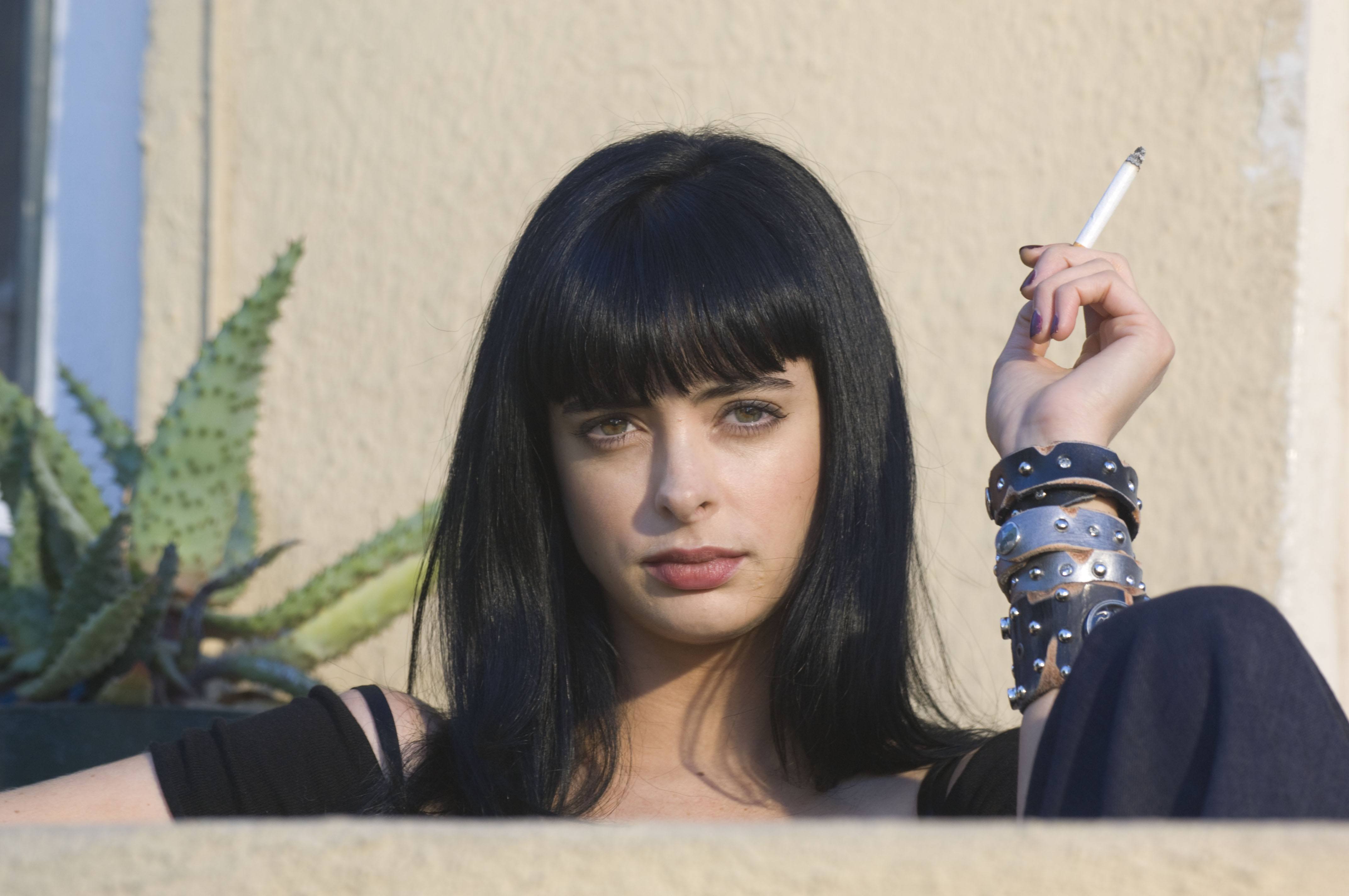 This was Walter’s final step into the darkness. | AMC

Walter did a lot of bad things early in Breaking Bad. He cooks meth in the pilot, and even picks up his first kill in the second episode of the series. But he didn’t fully crossover into complete and utter darkness until near the end of the second season. That involved Jesse’s then-girlfriend Jane, who had been a bad influence on the boy — in Walt’s eyes — and even once blackmailed Walt.

Walter busted into Jesse’s apartment to get their stash of drugs, finding his partner and Jane passed out in the bed and high on heroin. But Jane was sleeping on her back, and she began choking on her own vomit just before Walt walked out of the room. Walter rushed to her side with hands outstretched, fully intending to turn her body and save Jane from certain death. But then he froze. Allowing Jane to die for nothing more than his own selfish purposes is universally regarded as the exact moment where Walter White became irredeemable.

No half measures, Walter. | AMC

Without a doubt, the most chilling moment in Breaking Bad history comes at the very end of the 12th episode of Season 3. The episode is titled “Half Measures,” which is a reference to some advice that Mike gives Walt. He probably couldn’t have predicted just how much Walter would take it to heart.

Jesse plans to go after the drug dealers — who also happen to be employed by Fring — that he learns are responsible for the death of the little brother of his girlfriend (Andrea). Walter wants no part in this, instead facilitating a meeting with Fring in which the boss instructs the two dealers to no longer use children in their work.

When another little boy ends up dead, Jesse is pushed over the edge. He goes to confront the two men, brandishing a gun and almost certainly setting himself up for an untimely death. But at the last second, Walt comes flying from out of nowhere in his sensible, box-like car, running over the pair. He even gets out of the car, picks up one of their guns, and puts the finishing touches on his act of defiance. It’s one of the few moments in Breaking Bad history that both scares you and makes you cheer for Walter to do awful things.