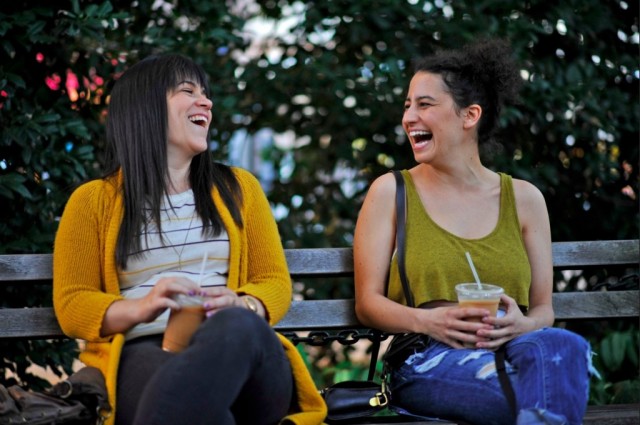 Broad City stars Ilana Glazer and Abbi Jacobson are about to add a third member to their incredible team. In news that is sure to thrill comedy lovers everywhere, the hilarious duo is reportedly joining forces with Bridesmaids director Paul Feig for a new upcoming film.

According to The Hollywood Reporter, Glazer and Jacobson have just sold an untitled comedy project to 20th Century Fox. Specific details about the project are being kept under tight wraps, but Feig is reportedly already attached to produce alongside his Feigo partner Jessie Henderson. Though Glazer and Jacobson star in Broad City, the two reportedly won’t actually appear in the upcoming film, instead focusing on developing the story. Similarly, Feig will only serve in producing capacity and is not attached to direct, despite his history helming successful comedy flicks.

As Broad City fans will attest to, any new project from Glazer and Jacobson is worth getting excited over, even if they are staying behind the camera this time around. The stars first made a name for themselves on the web as co-creators and co-stars of the series, which follows two women in their 20s living in New York City. It transitioned to the small screen in 2014 and has since become a breakout hit for Comedy Central.

Since making the move, Broad City has garnered strong reviews, particularly in its second season (which wrapped in March). Critics have labeled Glazer and Jacobson two of the funniest women on TV and praised their particular brand of comedy. The show earned a Critics’ Choice nomination for Best Comedy Series in 2014, as did Glazer for Best Comedy Actress. The show was renewed for a third season in January, although an exact premiere date has yet to be announced.

Feig also comes from an impressive comedy background. The director helmed the 2011 romantic comedy Bridesmaids, which was both a critical and commercial success. The film grossed more than $288 million at the worldwide box office and earned nominations at both the Golden Globes and Academy Awards. It also served as a touchstone for public discussion about the need for more female-driven comedies.

Since then, Feig has continued to be a driving force in leading vehicles for famous funny ladies. The filmmaker directed 2013’s The Heat, which starred Sandra Bullock and Melissa McCarthy and also performed well at the box office. Feig helmed McCarthy’s next comedy, Spy, as well, which is due to hit theaters this summer.

With Feig, Glazer, and Johnson all on board one project, the upcoming film is sure to be a must-see. And given their past success in comedy, moviegoers can surely expect to see something hilarious, even though the trio are not actually the ones starring and directing.

We’ll have to stay tuned for more specific details regarding the new project. In the meantime, all three have plenty of projects to keep them busy. Feig directed the upcoming animated comedy The Peanuts Movie and is currently working on developing the new female-led Ghostbusters reboot, starring McCarthy, Kristen Wiig, Leslie Jones, and Kate McKinnon. Meanwhile, Glazer and Johnson will return to their Broad City duties, with new episodes of the show expected to air sometime in 2016.