Can Ben Affleck and Matt Damon Help SyFy Get Back on Track? 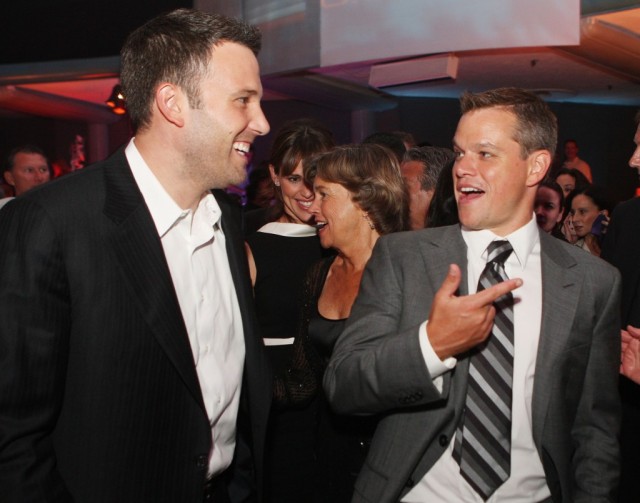 Ben Affleck and Matt Damon are bringing their talents to the small screen. The movie stars are once again teaming up behind the camera, in order to develop a spy drama series for the SyFy channel.

According to The Hollywood Reporter, the pair of actors, who wrote and co-starred in the Oscar-winning drama Good Will Hunting, are bringing new show, Incorporated, to the small screen via their production company, Pearl Street Films. Described as a “futuristic espionage thriller,” Incorporated is reportedly set in a world where corporations have unlimited power. The series, which also hails from CBS Television Studios, will follow the story of one man’s efforts to beat this corrupt world system.

Per THR, both Affleck and Damon are set to executive produce the show along with Pearl Street Films President Jennifer Todd. Brothers David and Àlex Pastor (Selfless, The Last Days) have signed on to pen the pilot. Meanwhile, Ted Humphrey, known for his work on the leading CBS series The Good Wife, will serve as both showrunner and executive producer for the project. Pearl Street creative executive Margaret Chernin is also on board as an associate producer.

Incorporated marks Pearl Street Film’s first ever foray into the world of scripted cable and only its second scripted venture overall, after The Middle Man. The latter drama was picked up for a pilot order by Fox last year, with Affleck on set to direct. But the project was pushed back in order to accommodate Affleck’s busy filming schedule, particularly his commitment to the highly anticipated flick Batman v. Superman.

In addition to their prior work in producing scripted series, the two also have experience in other types of television. While Incorporated may be Affleck and Damon’s first scripted cable entry in their company, the two also have an unscripted project in the works — or the revival of one, to be more specific. Back in April, it was announced that HBO is in the process of bringing back Project Greenlight, the documentary series produced by the star duo. The show, which follows a first-time director through the filmmaking process, initially aired on the network for two seasons in 2001 and 2003.

Incorporated comes just as SyFy is making a concentrated push toward more traditional sci-fi fantasy shows. In recent years, the channel has attempted to reach a broader audience, moving away from the genre just as it was exploding everywhere else (such as on AMC’s The Walking Dead and HBO’s Game of Thrones). Now, it is again making the shift away from series’ like Alphas, which was cancelled in 2012, and low-budget movies (Sharknado), and back to celebrated conventional sci-fi, similar to its last true breakout show, Battlestar Galactica. The network has a long roster of new dramas, including Dominion, Ascension, 12 Monkeys, and Olympus, as well as a slew of returning shows like Defiance, Haven, and Helix.

Affleck has been on a winning streak in terms of career choices lately, and if his recent success is any indication, then SyFy should expect Incorporated to get a good run. The actor is currently starring in the well-received adaptation Gone Girl, which hit No. 1 at the box office. Meanwhile, Damon is set to star in Ridley Scott’s outer space adventure project, The Martian, due out next year.