Can Jay Z’s Fame Save the Music Industry? 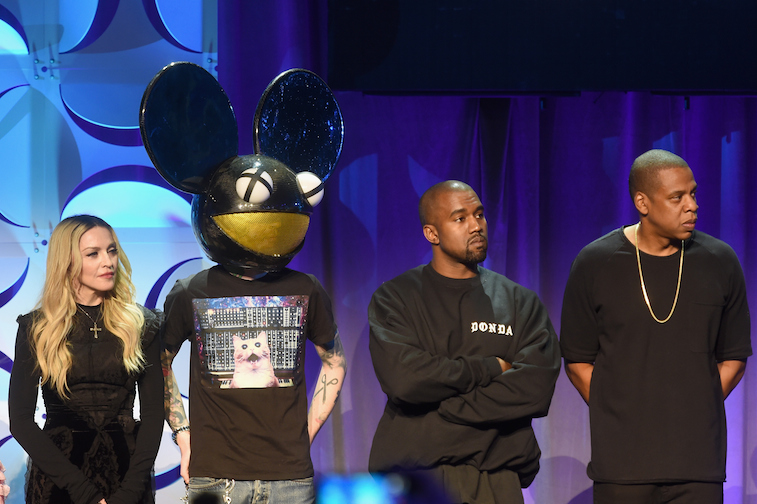 Earlier this week was the star-powered launch of Jay Z’s new artist-owned music streaming service Tidal, which touts itself as being the future of music as the recording industry continues to flounder. In a star-studded bash artists including Madonna, Beyoncé, Daft Punk, Arcade Fire, Jack White, Alicia Keys, Rihanna, Kanye West, and many others from a variety genres were there to ring in the service’s launch and announce themselves as shareholders. The biggest question the service is facing now amid all the hubbub is whether the stars can convince consumers to pay for music when there’s a glut of free services still available.

The launch event can be viewed on Tidal’s website. It was certainly a big deal in the music industry and on social media as Tidal is the first ever artist-owned streaming service. The company comes out of Jay Z’s purchase of the Swedish company Aspiro that went through at the beginning of the year.

The idea behind Tidal is that musicians can see streaming is the future of music listening, but right now streaming services don’t compensate artists and music creators fairly. Taylor Swift has been one of the most recent vocal opponents of Spotify, one of the biggest music streaming services, as she yanked her catalog from Spotify with the debut of her top-selling album 1989 last year.

Services like Spotify that offer free, ad-supported versions really result in negligible compensation for artists. Between the service taking their cut and the record companies taking their cut, artists make a tiny amount per stream. Such a small amount that it’s almost impossible to figure out, as this report from Buzzfeed points out. Musicians have been pushing back against this free-music landscape in a variety of ways, but no one’s making money from selling records any more.

Tidal’s mission is to create a paid streaming service with offline capabilities that offers the best quality audio and video content while paying the creators of that content fairly. Two versions of the service are currently being offered, neither of them are free. Tidal Premium costs $9.99 a month, offers standard sound quality, high definition music videos, and curated editorial content. Tidal HiFi is $19.99 a month and includes high fidelity sound quality plus the other extra goodies. Both are available for a one-month free trial. By being artist-owned, Tidal cuts out the middleman and thus has more money available to give to the artists.

The artists involved have already begun offering rare, exclusive content to entice people to the service, including Rihanna’s new, much-hyped track “Bitch Better Have My Money,” a video of the White Stripes’ first television appearance, and playlists curated by artists including Jack White, Madonna, and Beyoncé. The Hollywood Reporter gave a look at some of the treasures you can only get on Tidal.

Jay Z has some ambitious plans for the service, which he spoke about in a rare interview with Billboard. “People really feel like music is free, but will pay $6 for water,” Jay Z lamented, showing the difficult market he’s up against with trying to convince people to pay for something that for some reason technology has made us collectively decide is available for nothing. The record industry has known for years that this model isn’t sustainable but has been both unwilling and unable to find a different approach. Meanwhile musicians have been expected to give away their art for free.

Jay Z believes that by offering enough incentives and getting the biggest artists on board, then Tidal will be able to compete with the free services. He believes that the high definition video content it has sets it apart and that once the company starts showing artists it can pay them, more will want to join the movement. “Will artists make more money? Even if it means less profit for our bottom line, absolutely. That’s easy for us. We can do that. Less profit for our bottom line, more money for the artist; fantastic. Let’s do that today,” he said to Billboard.

This focus on the artist as the most central and important aspect of the business is something that even premium services like Apple’s Beats, which also does not have a free ad-supported version, doesn’t have. Jay Z sees Tidal as being almost like an artist collective. It’s a place where musicians can feel like they can release content, it will be treated respectfully with high quality audio and video, and they will be fairly compensated for it. Unfortunately in today’s landscape that’s a rare proposition. “I know this is going to sound crazy, but maybe they start attempting to make a ‘Like a Rolling Stone,’ you know, a song that doesn’t have a recognizable hook, but is still considered one of the greatest songs of all time, the freedom that this platform will allow art to flourish here,” Jay Z told Billboard.

The real ace in the hole here will be if the other artists that are part of Tidal follow in Taylor Swift’s footsteps and pull their music from the competing services like Spotify. It was a huge deal when just Swift’s music disappeared from Spotify; imagine what it would be like if all the artists present at the Tidal unveiling yanked their tunes as well. That’s when Tidal would actually be able to force people to realize that music isn’t, and shouldn’t be, free.