Can NBC Help Save ‘Undateable’ With Live Episode? 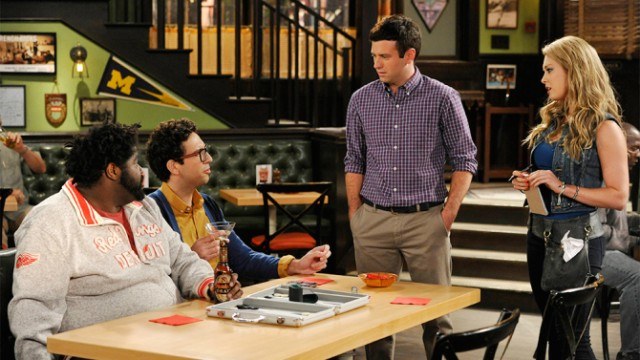 NBC’s Undateable is going live. The network has just revealed that the sitcom, which enters its second season this month, is set to air a special one-hour live episode on May 5, with separate productions for both the East and West Coast.

Based on the book Undateable: 311 Things Guys Do That Guarantee They Won’t Be Dating Or Having Sex, the comedy follows a bunch of close-knit, romantically challenged friends living in Detroit, all of whom hold certain qualities that make them appear “undateable.” For example, Danny Burton (played by Chris D’Elia) has serious commitment issues, his sister Leslie (Bianca Kajich) has “baggage” from her divorce, etc. The group helps each other deal with these issues and figure out their lives.

Following its debut in May 2014, the show earned largely mixed reviews from critics, who called it “mediocre,” ”ultimately tedious,” and even “unwatchable.” Over the course of its 13-episode freshman season, the series also saw continuously declining ratings, premiering to 3.8 million viewers and a 1.27 score in the 18 to 49 key demo and ending with 1.9 million viewers and a .71 rating. Despite the poor viewership, the underperforming sitcom was picked up for a 10-episode second season.

With its sophomore season debuting on Tuesday, the network is clearly looking to create some much-needed buzz around the series. “Everything with Undateable starts with the fact that [showrunner] Adam [Sztykiel] and I like the show, we think the performers are funny, and we’d do anything to give the show a shot,” executive producer Bill Lawrence told Entertainment Weekly.

Given the success NBC has had with live production in the past, it’s no surprise the network is using the same concept to try and help boost Undateable. The network has previously gone live with various sitcoms before, including with its hugely popular 30 Rock, which produced two such episodes in its seven-year run. Other channels have also recently created live installments of their comedies, such as TV Land’s Hot In Cleveland and the spinoff The Soul Man.

Though plot details regarding the upcoming live installment of Undateable have not been revealed, Lawrence did confirm to EW that viewers should expect several set changes. The episode will also reportedly feature a musical component with big guest stars. The added live component may work well in the favor of the show’s stars, like D’Elia, Brent Morin, Ron Funches, and Rick Glassman, who are all comedians used to riffing. The key is to retain that high energy while also keeping the live episode on track.

“For us, it’s preserving the spontaneity of the show,” Lawrence said, “and at the same time, not go down as being the worst live show of all time.”

In addition to being the series’ first live show, the May 5 episode will also mark the penultimate installment of Season 2. Viewers will have to stay tuned to see if the episode will garner some new attention for the series, as the network hopes, and potentially even increase its shot at a third season renewal.