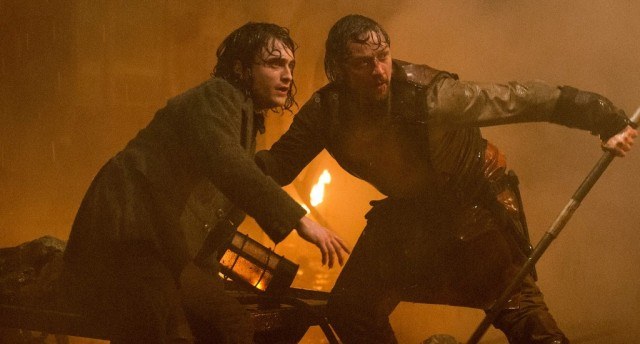 Mary Shelley’s Frankenstein is widely thought of as one of the most iconic horror stories ever conceived. First published way back in 1818, it’s since become one of the most adapted narratives in cinema. We’ve seen everything from a straight retelling in the 1931 movie by the same name, to a surprisingly well-realized sequel in 1935’s Bride of Frankenstein. Hollywood was far from finished with the story in the ’30s though, giving us a comedic retelling with Young Frankenstein, an historically terrible action movie in I, Frankenstein, and soon, another modern update to the tale, Victor Frankenstein.

This latest film in the long saga of Shelley’s original story stars James McAvoy and Daniel Radcliffe, and will give us yet another modern twist on an almost 200-year-old story. In a day and age where seemingly every possible angle has been approached, Victor Frankenstein will still seek to break new ground. Based on early trailers and the official synopsis, we can see an especial focus paid to the relationship between Dr. Frankenstein (McAvoy) and Igor (Radcliffe), portraying the latter as a practiced scientific mind rather than the hunch-backed henchman that Dwight Frye’s 1931 performance gave us.

The portrayal of Igor is one that Frye pretty much defined, albeit as a separate stock character named Fritz that served the same role as Frankenstein’s henchman slash lab assistant. Interestingly enough, the character of Igor is one that never really existed the way many believe. He never appeared anywhere in Mary Shelley’s original novel, and as we noted, the “Igor” we all imagine didn’t actually go by that name in the 1931 Frankenstein. The closest thing we really see is in Son of Frankenstein and Ghost of Frankenstein, where Bela Lugosi plays a deformed blacksmith named Ygor. What this means is that Victor Frankenstein might actually be the first large-scale movie in the history of Shelley’s story to actually bring us the Igor most audiences recognize.

Even with that, Radcliffe’s Igor bears little resemblance to Dwight Frye’s Fritz. He’s humpback-free, is described in the official synopsis as “Frankenstein’s protege,” and seems to be a key cog in moving the story forward, rather than a passive bystander whose only role is to flip a switch and say “yes, Master!” McAvoy may take center-stage as the titular mad scientist, but Radcliffe will act as his primary dramatic foil, and in some cases, the voice of reason. And while the infamous monster will of course be a large cog in the story, much of Victor Frankenstein will hone in on the close relationship of the Doctor and Igor.

The biggest obstacle to success McAvoy and Radcliffe have isn’t so much their own movie’s story, as much as it’s the long history of the Shelley’s story. There are dozens of adaptations, reworks, and reboots to compete with, and in the end, it’s a culmination of what Victor Frankenstein will be measured up against. Past tries at taking iconic movie monsters in a modern action context have fallen flat, with offerings like Van Helsing, Hansel and Gretel: Witch Hunters, and yes, I, Frankenstein all acting as cautionary tales. It’s never easy taking a classic story and providing an audience with something entirely new, and this try will almost certainly have its work cut out for it.

The movie releases November 25, curiously a month too late for the more appropriate Halloween season. With Oscar season ramping up and a new Star Wars on the horizon, Victor Frankenstein will have to give audiences an incredibly compelling reason to spend their Thanksgiving weekend watching this film. Whether it can provide that reason remains to be seen, but it won’t be for lack of trying on the part of its lead actors. If history has taught us one, it’s that there’s definitely a wrong way to reimagine a classic monster movie.