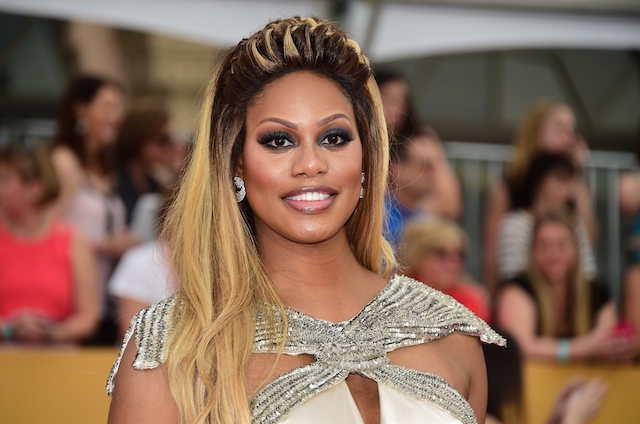 Laverne Cox, the transgender actress famous for playing the sassy inmate Sophia Burset on Netflix’s Orange Is the New Black, has been cast by CBS to star in the new series Doubt, Deadline reports. Cox is making history in process by being the first transgender performer to play a transgender character in a regular series role on a traditional broadcast network.

Cox already broke ground for her work on OITNB. She earned an Emmy nomination for her part, making her the first openly transgender actor to earn an Emmy nomination in an acting category. Cox was nominated alongside her co-stars Natasha Lyonne and Uzo Aduba in the outstanding guest actress in a comedy category. Kate Mulgrew was nominated for best supporting actress and Taylor Schilling for best actress in a comedy. Jenji Kohan’s show has been lauded for its diverse ensemble cast and honest look at women of various sexual and gender identities, of which Cox has played a key role. “Watching the show, one begins to realize that all the good parts for women truly have been kept locked up somewhere; now, here they all are, free (in at least one sense) to be portrayed,” said Washington Post critic Hank Stuever.

Doubt comes from Grey’s Anatomy executive producers Tony Phelan and Joan Rater. Cox will play the character Cameron Wirth, who is described as “a fierce and funny, competitive and compassionate transgender Ivy League-educated attorney.” Wirth’s experiences with discrimination and injustice in her own life inspired her to become a lawyer and fight hard for her clients.

Deadline says that Phelan and Rater wanted a transgender performer for the role from the beginning. The show overall will follow a smart, stylish, and successful defense attorney who becomes romantically involved with one of her clients, someone who may or may not have committed a brutal violent crime.

Doubt is still in the pilot stages and it’s uncertain whether it’ll be picked up to series, but Cox’s star power plus the success of other shows focusing on gender and sexuality issues are likely making CBS confident about its chances. Amazon Prime’s new original comedy Transparent took home two Golden Globes earlier this year, showing that audiences and critics are interested in series about transgender issues. That show created by Jill Soloway, sees Jeffrey Tambor playing an older man who transitions into the woman he always felt he was late in life and how his adult children deal with that transition. Transparent won the Globe for best comedy series and Tambor won for best actor in a comedy show.

Could a lead role on CBS endanger Cox’s beloved character on OITNB? Not likely, according to E! As it is, Cox’s role on OITNB is recurring rather than starring and she doesn’t appear on every episode. Should the CBS pilot get picked up, her schedule could probably be worked out so that she could appear on both shows.

The third season of OITNB has already finished production and the fourth season has not yet been announced, although given the success of the show — it’s the most-watched original on Netflix — you can count on that fourth season getting the greenlight. Cox’s co-star on OITNB, Matt McGory, was able to split his time between that show and How to Get Away With Murder, so Cox could likely pull a similar deal if Doubt gets picked up.

The success of Transparent in addition to the critical acclaim heaped on Orange Is the New Black has led CBS to give this a shot. Critics and streaming audiences have loved the aforementioned shows, but streaming services don’t rely as heavily on ratings and viewership as broadcast networks do. At traditional networks, no matter how much critical acclaim a show gets, it’s all about the numbers. If a large swath of people can’t be convinced to watch, then a show won’t live.

The CBS show is still in the pilot stages, meaning it’s far from guaranteed it’ll get picked up as a series. The widespread audience that a network like CBS needs might not be open-minded enough for a show about a transgender lawyer played by a transgender actress. But the success of Orange Is the New Black and Transparent signal that many people are interested in hearing these stories, so by taking a chance, CBS could have a hit with both critics and audiences on its hands.