Celebrities Who Are Fans of Chip and Joanna Gaines Even though Fixer Upper is over, fans of the show are still obsessed with its stars: Chip and Joanna Gaines. While the HGTV couple has kept us up-to-date with their latest endeavors with Magnolia Market, we can’t help but admit there’s still a Fixer Upper-shaped hole in our hearts.

As it turns out, tons of celebrities are on the same page as us. Some of the biggest stars have admitted to their obsession with Chip and Joanna over the years, and are probably thinking the same thing as we are: Thank goodness for reruns. Here are the celebrities who are fans of Chip and Joanna, ahead.

Longtime Fixer Upper fan Blake Lively has taken her obsession with Chip and Joanna to the next level. She may be a Hollywood star, but she’s admitted to considering relocating her family to Waco, Texas for the Gaineses. She admitted to People in 2015, “Oh my god … watching Fixer Upper. Chip and Joanna Gaines — what they do with the homes they renovate is just incredible.”

“I’ve practically looked into enrolling my kids in school in Waco,” she joked … but probably with a hint of seriousness. Given that Lively is a Chip and Joanna fan, it’s no surprise that her husband, Ryan Reynolds, feels the same way. In fact, if they weren’t obligated to live in Hollywood, Reynolds would have totally been down to move their family to Fixer Upper central.

Apparently, the admiration is reciprocated from Chip himself. He tweeted back, “I’m more nervous about how to respond to this, than i was typing my first tweet..”

When Cher considers herself your fan, you know you’ve officially made it. While she was once watching Fixer Upper in 2016, Cher revealed to Twitter how it brought back some old memories.

Chip shared in response, “love you Cher! The memories.. Her folks grew up on sonny and Cher! And we grew up on ‘if I could turn back time..’” Even HGTV couldn’t believe it, posting to Twitter, “wow, we’re honored!  Glad the show is inspiring great memories!” Olympic figure-skating champion Johnny Weir only gives the best of reviews to Chip and Joanna. When he isn’t busy skating or commentating the Olympic games with Tara Lipinski, you can apparently find him watching HGTV. He once shared, “I watch a lot of @hgtv when I can and I think [Joanna] and [Chip] are so exquisite. Go Texas!” 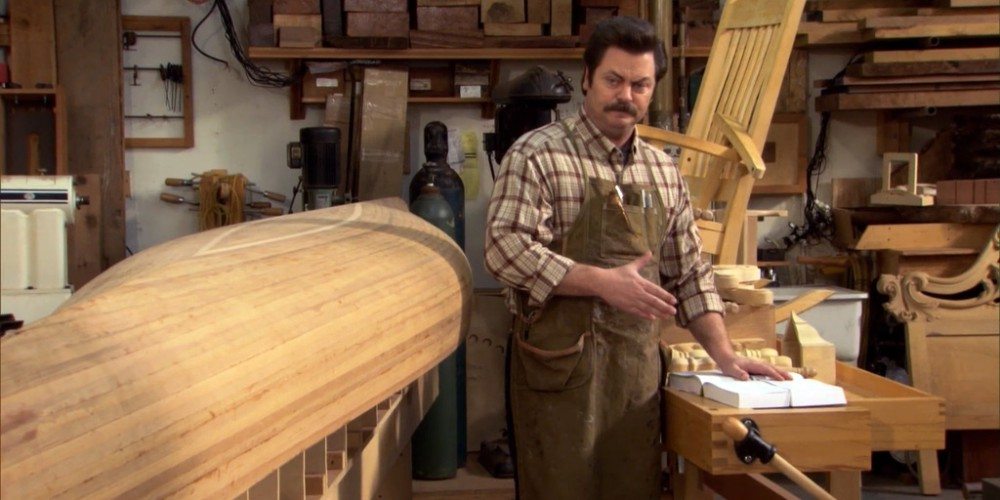 Nick Offerman as Ron Swanson on Parks and Recreation | NBC

Like his character on Parks and Recreation, Nick Offerman has a passion for carpentry. In fact, he’s even opened his own shop in Los Angeles, which “sells everything from benches to canoes,” according to Parade.

So we consider it quite impressive that Offerman gives Chip and Joanna the stamp of approval. How do we know? Well, it all started in September 2018 when Rhonda Hefton, a founding board member of Oklahoma’s HopeHouse OKC, submitted an application for Chip’s “Chipstarter” program.

To give Hefton a boost, Will and Grace star (and Offerman’s wife) Megan Mullally tweeted her support. Offerman not only jumped in with his own endorsement, but revealed just how big of a fan he was of Fixer Upper. He tweeted at Chip and Joanna, “I admire your gumption, your elbow grease, and your marital tenacity, not to mention your commitment to ship-lap. Please give our pal your consideration, and good Lord you should taste her stuffing. Not a euphemism.”

As he has in the past, Chip responded with pure amazement of his celebrity fanbase. He wrote, “Ok, ok, you two. You got my attention. Not to mention, the whole office is completely geeking out! We have flagged, highlighted and marked your friend’s video ‘for immediate consideration.’ And you know, if it doesn’t work out this time, there’s always #Nickstarter…?”