Celebrity Couples That Split and Broke Our Hearts in 2017

When Gwyneth Paltrow coined the phrase “consciously uncoupling,” we may have laughed, but we were also shocked by the news of her split from Chris Martin. We can’t help but idolize the picture-perfect relationships between our favorite celebrities, even if deep down we know they’re not likely to survive.

In 2017, celebrity couples have uncoupled consciously all over the place, and it’s left us all with broken hearts. We’ve gathered 15 of the most devastating celebrity breakups of 2017 and crossed our fingers that we don’t have any more in 2018.

When Chris Pratt and Anna Faris announced their split in 2017, it made us question whether love is real. Pratt took to social media to make a statement on Aug. 6, which read:

Anna and I are sad to announce we are legally separating. We tried hard for a long time, and we’re really disappointed. Our son has two parents who love him very much and for his sake we want to keep this situation as private as possible moving forward. We still have love for each other, will always cherish our time together and continue to have the deepest respect for one another.

While we’re hoping for a potential reconciliation, it’s probably best not to get our hopes up. At least we had eight years to swoon over their #relationshipgoals.

Seriously, we’re waiting for someone to jump in and tell us love still exists. A couple that once seemed to be so in love with each other, Rachel Bilson and Hayden Christensen have decided to go their separate ways. They were together for nearly 10 years and have a beautiful daughter together, Briar Rose, so this celebrity split was particularly shocking.

E! News reported that their differing lifestyles and interests likely led to the split. According to their source, “Rachel is very social and likes to hang out with friends. Hayden is reclusive and off the grid. She accepted that for a long time, but sometimes it was a lot to handle.”

Scarlett Johansson and Romain Dauriac pose on the red carpet for the 87th Oscars on February 22, 2015, in Hollywood. | Mladen Antonov/AFP/Getty Images

After two years of marriage, Scarlett Johansson filed for divorce from Romain Dauriac, as well as primary physical custody of their daughter, Rose Dorothy Dauriac. What ended up being a bit of a custody battle, the divorce has been finalized and the exes, along with their lawyers, came to an agreement.

Even through all the legal drama, Johansson and Dauriac remained friends. However, a source close to Dauriac told People, “I’ve been expecting this for some time. Romain and Scarlett has never made sense to me. They aren’t equals. There’s always been something wrong with this picture.”

Johansson has definitely moved on, as she is now in a secret-turned-public relationship with Saturday Night Live’s Colin Jost.

What was probably the coolest pairing of two celebrities ended up in a broken engagement. Westworld star Evan Rachel Wood and her now ex-fiancé, Zach Villa, formed the band Rebel and a Basketcase, so we’re left to assume the band is done, too. That is, unless they can pull a Christina and Tarek El Moussa and keep working together despite the split.

This isn’t Wood’s first experience breaking off a serious relationship. She was previously engaged to Marilyn Manson, and had then been married to actor Jamie Bell from 2012 to 2014.

Audrina Patridge and Corey Bohan arrive at the 2013 Billboard Music Awards at the MGM Grand Garden Arena on May 19, 2013, in Las Vegas. | David Becker/Getty Images

After watching Audrina Patridge fight for love on MTV’s The Hills for so many years, we were happy to see her finally get a fairytale ending. Unfortunately, things took an ugly turn for the worse with her husband, Corey Bohan. Patridge not only filed for divorce, but has filed a temporary restraining order against Bohan due to alleged domestic violence.

Patridge and Bohan had only just gotten married in Nov. 2016, a few months after welcoming their daughter, Kirra Max. People reports that they had been dating on and off since 2008, but that “these problems have existed their entire relationship.” Their source continued, “They broke up and got back together, and she really thought things would be different when they got married, but she’s realized things had to change before it got even worse, and she had to get her and her daughter out of the situation.” 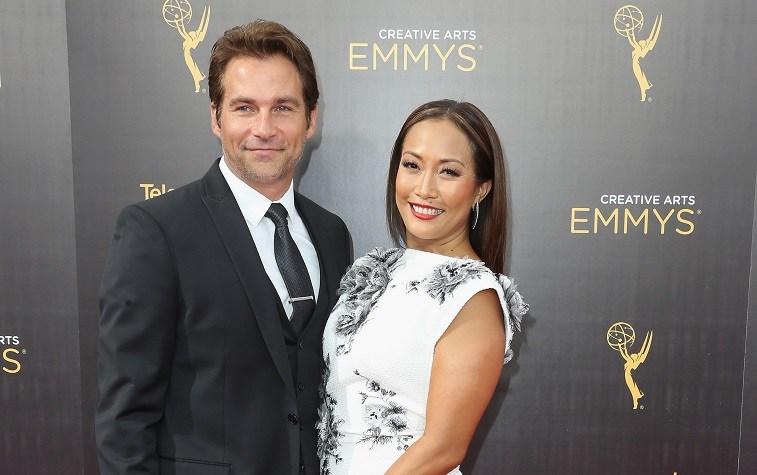 Just in Aug. 2017, Dancing with the Stars judge Carrie Ann Inaba seemed to be setting in plans for her wedding to Robb Derringer — she even announced her mother as her maid of honor. However, Inaba and Derringer decided to split after nine months of engagement.

The split may not have come as a surprise to some, as Inaba had posted a photo of a quote to her Instagram on Sept. 7, which read, “Just when I think I’ve learned the way to live, life changes,” including a broken heart emoji in her caption. Inaba has been receiving many words of love and encouragement on the post, so hopefully her fans will help her feel less heartbroken soon.

Third time was not the charm for Nick Viall on The Bachelor franchise. Though Viall finally got engaged on his Bachelor season, he and Vanessa Grimaldi have called it quits five months after the finale. Although Bachelor Nation definitely saw this coming, you can’t deny hoping that real love is found on the show.

According to a source for E! News, “Nick and Vanessa have wanted to end this for a while now,” but they had been “trying to figure out the right timing.” We definitely picked up on the tension between the two regarding where they would live if they ended up together.

Vanessa made it clear that she is “extremely close to her family in Montreal and is very connected to her community and her work there.” A source for AOL acknowledges that “moving to Los Angeles or elsewhere long term was never really on the table for her. And, unfortunately, it seems as though Nick never had any intention of moving to Montreal.”

What really happens at the #goldenglobes

Sarah Hyland and Dominic Sherwood couldn’t keep their hands off of each other at the 2017 Golden Globes, but that didn’t stop them from breaking our hearts later in the year. The pair had dated for two years and seemed totally in love.

Luckily, Hyland and Sherwood ended things on good terms, as a source told People, “They aren’t dating anymore but they both have mutual respect for one another and remain friends.”

After 16 years together, but never marrying, Helen Hunt and Matthew Carnahan have called it quits in 2017. They’ve apparently had difficulties in the relationship for a number of years, but they do have a 13-year-old daughter together, Makena Lei.

A source told E! News, “She has been split up with Matthew for several months. They had a rocky relationship and many offs and ons over the years. They stayed together as long as they did because of their daughter. They’ve split up before, but this time seems to be different.”

Elon Musk may be insanely successful in his career, but he has not found such success in his relationships. The CEO of Tesla and Amber Heard were dating for about a year, but both were too busy to dedicate time to their love lives. That’s not to say they won’t get back together in the future, as the two are still close, according to Musk.

He commented on one of Heard’s Instagram posts, “Although Amber and I did break up, we are still friends, remain close and love one another. Long distance relationships, when both partners have intense work obligations are always difficult, but who knows what the future holds.”

Ben Stiller and Christine Taylor attend the Manus x Machina: Fashion In An Age Of Technology Costume Institute Gala at Metropolitan Museum of Art on May 2, 2016 in New York City. | Mike Coppola/Getty Images for People

Yet another case in which conflicting schedules led to the end of a relationship, the split between Ben Stiller and Christine Taylor was particularly surprising. The two have been together for nearly 20 years, so it’s hard to remember a time when they weren’t a Hollywood couple.

A source told People, “It gets hard — he has a very busy Hollywood career, and she’s been very focused on being a mom.” Stiller and Taylor have two children together, and they’ve even co-starred in some movies together, such as Zoolander.

Paramore’s Hayley Williams and Chad Gilbert of New Found Glory have been together for nearly a decade, but decided to end things for good in 2017. The musicians took their relationship slowly, with an engagement in 2014 and marriage in 2016. Sadly, Paramore’s “Still Into You” (Williams’ love song about Gilbert) no longer holds true.

Williams and Gilbert released a separation statement on Instagram that has since been deleted. It read, “The two of us have been together for the better part of 10 years. We’ve grown up together and we’ve been beside each other through a lot of goodness and a lot of challenges. There is a challenge to trying to understand your own heart in the context of a relationship … and there is goodness in considering another heart, even in spite of your own. Marriage is not for the faint of heart. Love is an absolute risk. And it’s up to each of us to stay hopeful even when the outcome isn’t what we’d originally hoped for.” 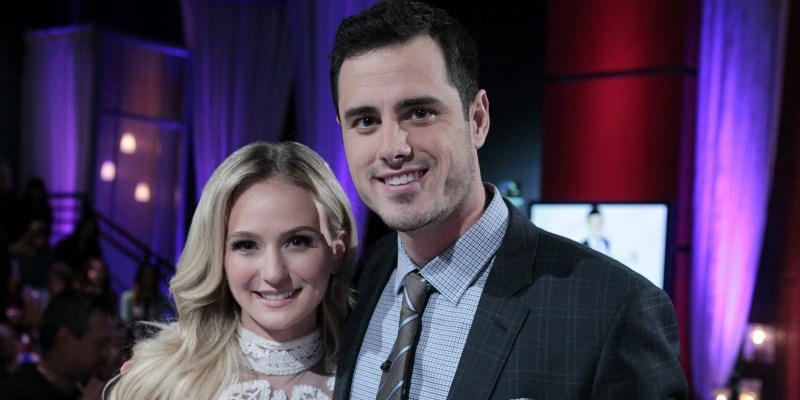 2017 took another Bachelor success story away from us with the split of Ben Higgins and Lauren Bushnell. Like with the case of Nick Viall and Vanessa Grimaldi, we weren’t completely shocked that the couple called it quits. During the “Fantasy Suites” episode of Higgins’ season, he not only told Bushnell that he loved her — he told runner-up, JoJo Fletcher, that he loved her, too.

The couple had different responses to the controversy. Bushnell expressed, “I fall more in love with Ben every day and it’s hard to separate what happened long ago and my current feelings. It’s confusing. It does wear on me.” Higgins, however, admitted that he couldn’t apologize “for being honest or expressing what [he] thought was the best thing to express at the time.”

Even though Olivia Munn and Aaron Rodgers have “amicably ended their relationship of three years,” it was still painful for us to accept. This is especially true considering we started 2017 with engagement rumors between the actress and Green Bay Packers quarterback. Things could have been worse, as a source told People that Munn and Rodgers “[remain] close friends and wish nothing but the best for each other moving forward.”

Fergie and Josh Duhamel were one of those rare celebrity couples that we actually thought would last forever. When they announced their split in Sept. 2017, it was revealed that they had been separated since February, but needed time to themselves before releasing the heartbreaking news to the public. After eight years of marriage and raising their 4-year-old son, Axl,  the couple released the following joint statement:

“With absolute love and respect we decided to separate as a couple earlier this year. To give our family the best opportunity to adjust, we wanted to keep this a private matter before sharing it with the public. We are and will always be united in our support of each other and our family.”