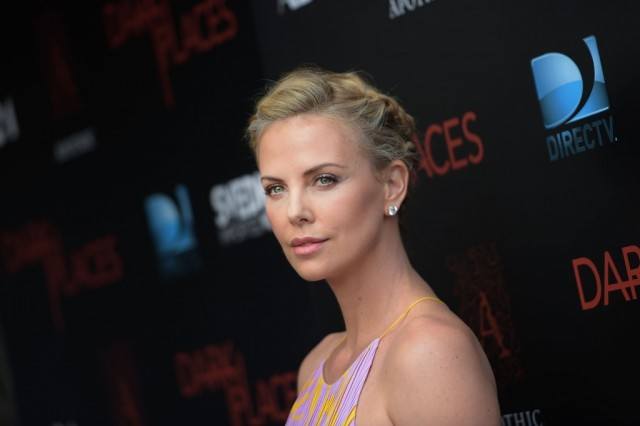 Charlize Theron drew lots of praise after displaying her impressive action-star chops in this year’s Mad Max: Fury Road. Now, it looks like her enviable butt-kicking skills are inspiring a gender swap in the upcoming thriller, The Gray Man. The actress is reportedly in talks to join the cast of the action flick, in a lead role that was previously attached to none other than Brad Pitt.

According to Deadline, Theron is in early talks to star in the film based on Mark Greaney’s novel of the same name. The screen adaptation has been stuck in development for some time. In 2011, Pitt was reportedly interested in taking on the lead role, with James Gray (The Immigrant) attached as a director. After that fell through, the project was temporarily put on the back burner. Now, it seems that Sony wants to redevelop the concept with Theron in the central role

The Gray Man centers on an expert CIA op-turned-assassin who is forced to evade adversaries as he saves the lives of daughters he didn’t know he had. Joe and Anthony Russo penned the script for the adaptation and were also once attached to direct before their schedule became too packed with Captain America: Civil War and the next two installments of The Avengers. Should Theron officially close a deal to star, their screenplay will have to be slightly reworked in order to explain how exactly her character is unaware that she has children (a case of amnesia perhaps?).

While swapping the gender of a lead role in order to accommodate the actor doesn’t happen very often, it isn’t unheard of. Just look back on some classic examples: Sigourney Weaver’s iconic role as hero Ripley in Alien was originally conceived for a man. Sony in particular has previous experience pulling a gender switch for a protagonist. The studio famously retailored spy thriller, Salt, for Angelina Jolie after Tom Cruise bowed out of the lead role.

The practice has become even more common lately. Case in point? Paul Feig’s all-female Ghostbusters, the rumored Expendabelles film, and the Road House reboot set to star Ronda Rousey in a role originated by Patrick Swayze. Sandra Bullock also recently nabbed a role originally written for a man in this month’s Our Brand Is Crisis.

Given the year Theron has had, it’s no surprise that Sony would want to get her on board. The actress’s turn as Furiosa in Mad Max also earned rave reviews from critics, many of whom named her the breakout star of the film over co-star Tom Hardy. The performance also helped further cement her as a certifiable badass — a role she’s set to continue in her upcoming projects.

Though Mad Max‘s George Miller recently revealed that Theron would have only a small part, if any, in the franchise’s future sequels, that doesn’t mean she’s done kicking ass on screen. The actress is staying as busy as ever with a slew of action-oriented films on the horizon. She’s set to reprise her role as the evil queen Ravenna in Snow White and the Huntsman, due out next year. She’s also expected to star in the action thriller The Coldest City, which will be helmed by John Wick co-director David Leitch.

Whether The Gray Man will be the latest action flick added to her schedule remains to be seen. If she does end up closing a deal, Theron’s label, Denver & Delilah, will reportedly serve as producers on the movie alongside Joe Roth.

Theron has proven herself more than capable of leading a fast-paced blockbuster and Sony would be smart to strategize the movie premise around her. But regardless of whether she takes on this particular movie on or not, one thing’s for sure: Theron’s winning streak as an action star is just beginning.