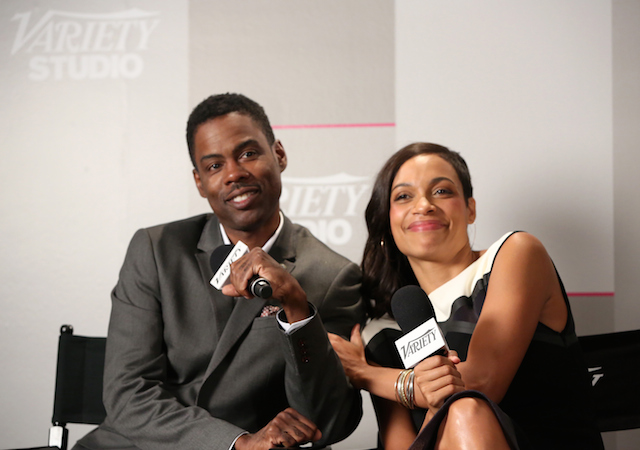 Chris Rock made a triumphant return to the stage of Saturday Night Live over Halloween weekend to promote his new Oscar-contender comedy Top Five and remind the world that stand-up comedy can be offensively hilarious without spewing racism and sexism amidst a late-year comeback from the actor-comedian. With successful promoting like the SNL appearance, Rock could change the minds of ancient Academy voters, who are notoriously un-accepting of comedic films.

Rock was a cast member on SNL during the variety show’s ’90s hey-day from 1990 to 1993. While much of the rest of this weekend’s episode fell flat — aside from a musical performance from Prince — critics loved Rock’s edgy opening monologue which covered everything from terrorism to commercialism and showed he’s still one of the best stand-up comedians out there. Rock’s presence on the show boosted Saturday Night Live to its highest ratings of the season, according to Deadline.

Rock joked about how the Boston Marathon bombing was “the most sadistic terrorist attack ever” because after jogging for 26 miles the contestants got to the finish line and were told to “Run!” and also said that the Freedom Tower in New York should change its name to the “Never Going In There Tower.” He even made the tired topic of how commercial Christmas has become these days funny by mocking the economists that go on TV and talk about “how horrible the Jesus birthday season was this year… hopefully business will pick up by His crucifixion.”

“It’s been so long since transgressive comedy was welcome on SNL that last night’s opening monologue was shocking, for which we should be deeply grateful. Rock stormed not bravely but gleefully, which is a lot better, into forbidden territory,” said Deadline critic Jeremy Gerard. Rolling Stone also gave the performance raves.

Rock’s new comedy Top Five — which he wrote, directed, and stars in — is getting similar raves from critics and has even been named as an Oscar contender. Top Five has a 92% Fresh rating on Rotten Tomatoes as it manages to be a meta examination of Rock’s career without becoming pretentious or sacrificing the laughs. But, the Academy is notoriously exclusionary of comedies, not having given a Best Picture award to a comedy since Annie Hall in 1977, Deadline said when weighing Top Five‘s chances. Deadline surmised that although Top Five deserves more recognition, the most it can hope for is a couple of token nominations and possibly a best screenplay win.

While Paramount is pushing hard for awards show love for the movie and critics are drooling over it, Academy voters might also still be a little bitter over Rock’s hosting gig back in 2005. He was hired to host the awards ceremony in the hopes that his edgy comedy would boost ratings. While Rock brought the edge, the ratings didn’t improve much and members of the Academy were offended by his jokes that the Oscars are irrelevant and that Jude Law is a poor man’s Tom Cruise. Oscar voters might not be so quick to forget those insults making Rock a less-likely candidate to break the almost iron-clad comedy rule.