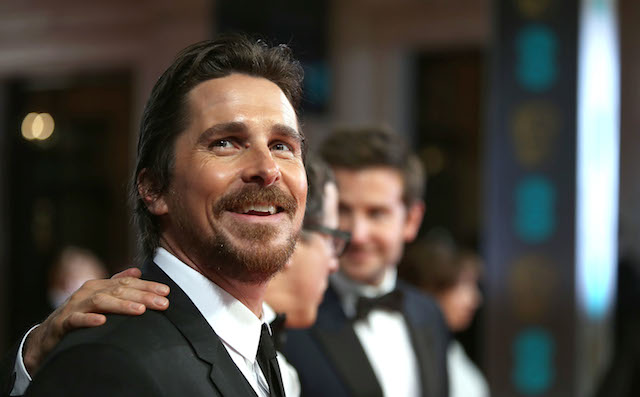 Christian Bale may be taking on another iconic figure for his next big role. The actor is reportedly in talks to play Steve Jobs in Sony’s much-discussed upcoming biopic.

Sony first optioned rights to the story, based on Walter Isaacson’s best-selling biography, in 2011, and the project has undergone several significant changes since then. According to The Hollywood Reporter, Bale was actually originally eyed to take on the role earlier this year, when director David Fincher was initially on board to helm the film. Since then, Danny Boyle has been brought on as the new director of the still-untitled Jobs project, with Aaron Sorkin on board to adapt the book to screen. Meanwhile, Scott Rudin will produce, along with Mark Gordon and Guymon Casady.

In addition to Bale, Sony has also been considering several other big Hollywood names for the title role. Other acclaimed stars that have been name-dropped in connection to the project include the likes of Matt Damon, Ben Affleck, and Bradley Cooper. Most recently, Leonardo DiCaprio was also reportedly in talks to the project, but ended up pulling out of negotiations and turning down the role.

Following his departure from the film, the studio has once again set its sights on Bale to portray the late Apple leader. Per THR, Bale was bumped up to frontrunner for the part after the actor’s negotiations with Fox to star in the film adaptation of the 1964 book The Deep Blue Goodbye — which, coincidentally, also had DiCaprio on board to star at one point — began to stall.

Bale was initially set to play the lead role of Detective Travis McGee in the film, which the studio was hoping to use as the launch for an entire franchise. The actor was reportedly hesitant to take on a movie that required sequel options and put negotiations on pause; now talks are once again ongoing for Bale to star in the film without any sequel commitments. But even if the deal for The Deep Blue Goodbye does end up panning out, the actor would reportedly shoot the Jobs movie first.

The film will reportedly be divided into three long scenes, all of which will take place in real time, as previously described by Sorkin. The Daily Beast reports that each of the scenes will apparently take place before one of Apple’s highly publicized product launches. The first will follow the 1984 launch of the Macintosh computer, which began Jobs’s rapid ascent. The second scene will focus on NeXT, in 1990, which showed Jobs after he left Apple. The last scene will reportedly feature the 2001 launch of the iPod, which completely revamped the way audiences consume music content.

It’s a big role for anyone to take on. Ashton Kutcher received mixed reviews for his portrayal of the tech entrepreneur in the 2013 film Jobs. But Bale, in addition to being a more critically acclaimed actor, is famous for his intensive methods of getting into character — a process that is probably necessary, given all his prior experience in taking on iconic figures. He previously played Bruce Wayne (aka Batman) in the well-received Dark Knight franchise.

Next up, he’ll tackle the role of Moses in Ridley Scott’s upcoming biblical epic adventure, Exodus: Gods and Kings, out in December. It doesn’t seem like a stretch to think he’ll do the character of Jobs justice, as well.