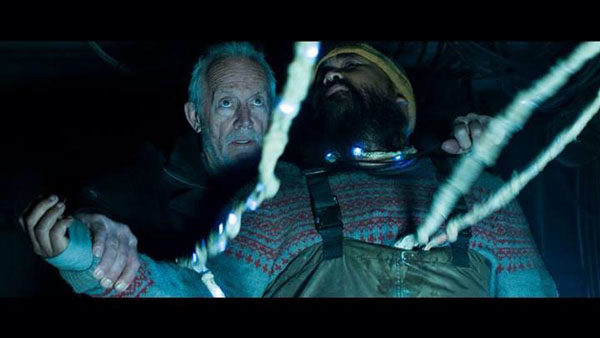 Amalgamated Dynamics, Inc. has been crafting practical effects for a variety of genre films for the last thirty years. Its resume is mottled with films of vastly different quality, from the good (James Cameron’s classic Aliens, John Huston’s The Grifters, Katheryn Bigelow’s Point Break, Paul Verhoven’s satiric cult favorite Starship Trooper), to the bad (Alien Resurrection, the remake of The Thing), and the just plain ugly (Alien 3, Mortal Kombat). But the company’s work has remained innovative and reliably vivid. In 1992 its work on Death Becomes Her won an Oscar for Best Visual Effects, and Starship Troopers was later nominated for the same award.

But ADI has run into a lot of trouble in recent years, as its craft has been slowly abraded by the advent of computer effects. The group did some astonishing work for the dreaded 2011 remake of John Carpenter’s classic The Thing, using animatronics, puppets, make-up, and prosthetics, staying true to the spirit of Carpenter’s film. But its work was tossed away, and CGI was used instead. ADI’s work has a certain tangibility to it, a look you can feel, a visceral sense of fear that works for body horror. The flaps of torn flesh and gore are upsetting, of course, and they should be. The digital effects that replace the practical effects looked awful, and fans aptly rejected the movie.

Here’s a video ADI posted to showcase the incredible effects work it did, most of which was replaced by CGI.

Now Alec Gillis and Tom Woodruff, Jr., the effects gurus begind ADI, are creating their own horror film, completely devoid of CGI. Harbinger Down, which touts itself as “a practical effects film,” channels Carpenter’s classic, as well as Alien and other ’80s horror flicks. ADI has been responsible for all of the creature effects for the Alien franchise from Alien 3 on (so, all of the bad movies), and one gets the sense that the company pines for the days of Ridley Scott and James Cameron, of creatures conjured with movie magic instead of computer screens.

The duo tapped Lance Henriksen, one of the heroes of ’80s genre movies (having appeared in The Terminator, Pumpkinhead, and memorably being torn in half by a Queen alien in Aliens), to star in the film. It’s comforting to hear his gravel-throated bellows again, though seeing his face wrinkled like an old road map is a little weird. (The guy’s 74, so it makes sense, but still.) Henriksen plays the captain of a fishing trawler that takes on some graduate students who are studying the effects of global warming on Orcas. The group comes across a piece of frozen Soviet wreckage, decades old, that appears to have human remains harbored inside. You can probably guess what happens next.

If not, here’s the trailer.

The filmmakers’ intentions are noble, and every horror film fan should get behind this. We’re always crying ‘”Foul!” at the overabundance of CGI and mourning the death of practical effects, and now we have a movie that exists solely to showcase the still-relevant capabilities of practical effects. Funded through Kickstarter as well as the filmmakers’ own personal money, the film has a miniscule budget of $380,000, which is only slightly more than how much the final shot–one single shot–of Batman Returns cost in 1992. Think about that.

Ironically, Harbinger Down was filmed with a digital camera, the Blackmagic Cinema Camera, a 2.5K device that, like the Arria Alexia and other digital cameras, works best in high-contrast lighting. In bright light, the camera can’t hide the flaws of its economy model, which is mostly used by independent and self-financed films. (An Alexia, which has been used to shoot the last three films that won the Oscar for Best Cinematography, can set you back over $100 grand.) Let’s hope the movie can provide some good old fashioned thrills, chills, and bodily mutilation.

A group of grad students have booked passage on the fishing trawler Harbinger to study the effects of global warming on a pod of Orcas in the Bering Sea. When the ship’s crew dredges up a recently thawed piece of old Soviet space wreckage, things get downright deadly. It seems that the Russians experimented with tardigrades, tiny resilient animals able to withstand the extremes of space radiation. The creatures survived, but not without mutation. Now the crew is exposed to aggressively mutating organisms. And after being locked in ice for 3 decades, the creatures aren’t about to give up the warmth of human companionship.