‘Dancing with the Stars’: The Craziest Celebrity Costumes

There have been a lot of celebrities to go on Dancing with the Stars. Some of them had their time on the show end up in humiliation either from injury, stumbling through a routine, or being put in insane outfits.

Believe it or not, there is a lot of preparation that goes into a routine — including costumes. Both the celebrities and professional dancers often douse themselves in self-tanner and put on elaborate outfits to fit the theme behind some routines. Some of these themes have given us some of the strongest performances on the show. Others have just given us the wackiest outfits.

But which fall to the bottom of the list? Here are the 15 celebrity costumes on the competition show, ranked from bad to outright insane. 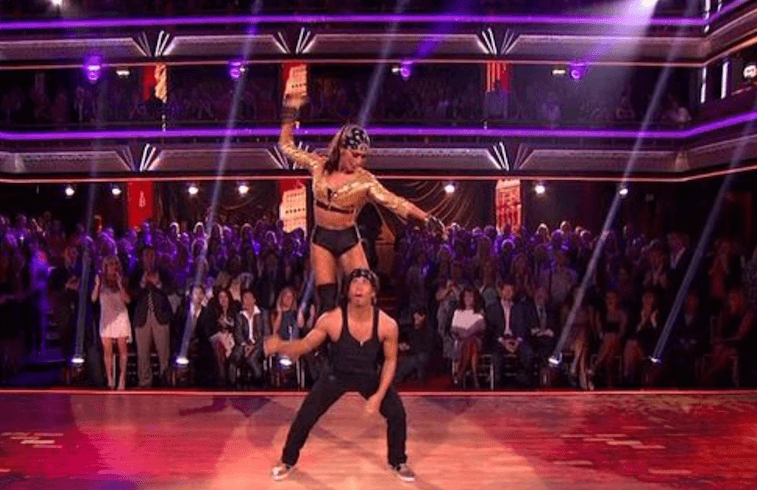 WIth help from pro Julianne Hough, Apolo Anton Ohno became the champion of Season 4. But he later came back for more dancing and crazy outfits by joining the all-star season. That time, he was paired with Karina Smirnoff.

The two paired up to tackle a hip-hop dance. As if that wasn’t already a big risk to cause the Olympic speed skater some embarrassment, they had him dress up in this outrageous outfit. The partners were in gold, black, and fishnets for their routine.

The cheesy outfits were designed to match the routine’s song, Bell Biv Davoe’s “Poison.” The early 2000’s were pretty cheesy for fashion. However, it’s amped up by these two, who look like fish out of water in the outdated outfits.

All eyes were on Julianne Hough’s fringe outfit. | ABC

The country singer and dancer teamed up to do a salsa routine. Julianne Hough can look good in pretty much anything, but this outfit was pretty wild.

Of course, it was more about showing her movement throughout the fun routine, but it’s still one of her worst costumes.

When the show decides to go with leopard print, it doesn’t hold back. The dancing duo might have won Season 3, but things still went up and down for them in the fashion department throughout the show.

For the second week, they performed a quickstep, and unfortunately, Burke was drowning in animal print.

These over-the-top costumes were meant to fall under the theme of disco. Sparkles on the costumes were already a lot to look at, but the inclusion of cheetah print pushed the look over the edge. The disco wig also didn’t look great.

The dance team performed the salsa together, and Smirnoff pulled out another wild bodysuit to compete. This time, it was animal print with a crazy texture.

The “I Know You Want Me” routine didn’t work, and they ended up getting eliminated.

Velour and animal prints made yet another appearance. | ABC

The pair teamed up to perform the jive in questionable costumes. The theme they were given was the ’60s, and somehow that meant animal print and velour.

The football player’s costume was pretty ill fitting and didn’t go with his partner’s hot outfit at all.

The commentator was performing the quickstep with her dance partner. For the performance, she wore a flattering dress. However, it makes the list because it wasn’t very functional. She made headlines for having a wardrobe malfunction that night, and cameras had to cut away when she turned to face the judges.

“On the European version that would be perfectly fine,” joked host Tom Bergeron. Part of her breast was reportedly exposed.

Fans were expecting more from the duo’s disco look. | ABC

The dancing partners took on the cha-cha-cha together to the song, “Moves Like Jagger.” The theme seems to be disco, given it starts off with Chmerkovskiy getting out of a car with disco balls hanging in the window. But there is the odd costume color of brown.

Given the era is known for colors and big hair, we have to say this missed the mark. 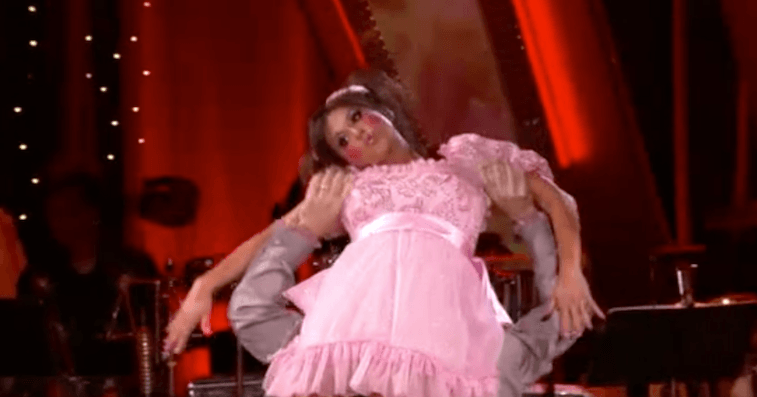 For their freestyle performance, the two decided to essentially turn Marie Osmond into a doll to toss around. This led to a pretty disturbing costume, complete with pigtails for the adult woman.

Sadie Robertson and Mark Ballas show off their moves in these questionable outfits. | ABC

The reality star’s background led to an interesting makeover for her professional dance partner. For one of their routines, Mark Ballas put on a camo suit and bandana.

He then pushed the costume even further with a fake beard to look like he belongs on Duck Dynasty with the Robertsons.

When Bill Nye the Science Guy joined the cast,  he performed multiple dance routines with a theme around science. One literally turned him into a robot for a jazz routine.

It was probably a clever way to allow him to be stiff on the dance floor, but the routine looked just as clunky as his costume.

Once again, Smirnoff got sacked with a bad costume on the show. This time, it was for an Argentine Tango routine to “Bust Your Windows.”

Martinez looked pretty dashing in his black and blue suit. But though Smirnoff’s bodysuit was probably supposed to be sexy, it missed the mark.

The retired tennis player performed the jive with her dancing partner. She had a lot of things working against her, including a toe injury from practice.

But what also didn’t help is that she was given a puzzling costume that didn’t fit her fun and flirty routine. She ended up being the first to be booted from Season 14.

The Oscar winner was a joy to watch in the competition. She was pretty much game for anything — including the insane costumes.

However, the worst one was probably the frilly pink number for her jive routine. The busy costume was luckily not her last. 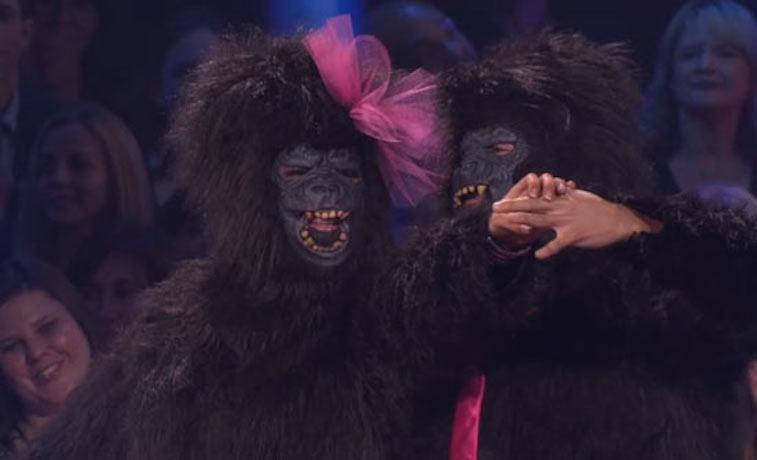 These outfits were totally bananas. | ABC

The dancing pair started off one of their performances in full on monkey suits to a song by The Monkees.

Thankfully the dancers didn’t have to do the entire routine in them, but just the first few moments were bad enough to still make the list.

Read More: 15 Celebrities Who Were Humiliated on ‘Dancing with the Stars’