‘Dancing with the Stars’: The Craziest Things Dancers Revealed About Athletes on the Show

There have been many athletes on Dancing with the Stars competing for the Mirrorball trophy. They are usually known for having a great work ethic, so it doesn’t take long for them to be in it to win it. But they also have to overcome many hurdles, like posture and being much bigger than their partners.

Over the years, many professional dancers have revealed things their athletic partners have done while competing on the show. Some of that includes baby dance classes, spending a lot of money, and practicing dancing alone in embarrassing ways.

They also revealed a lot of drama — including how they dated their partner and why they broke up. Some just flat-out said their partner wasn’t a good person. So what are the juiciest details dancers have let slip?

Here are the 15 craziest things dancers revealed about athletes on Dancing with the Stars.

15. Cheryl Burke said Terrell Owens tried to slim down his arms for the show 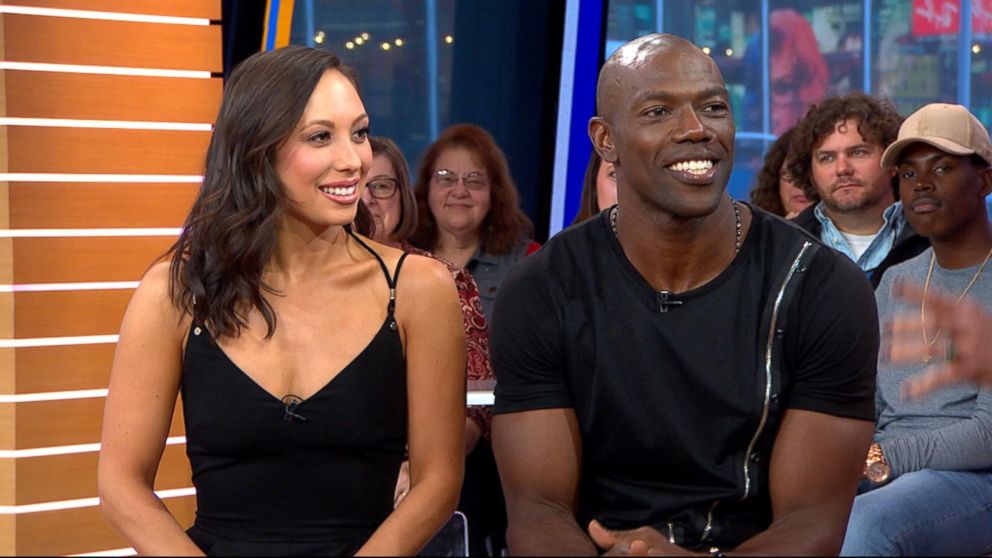 His guns weighed him down. | ABC

The professional football player’s strong arms might have helped him on the field but hindered him on the dance floor according to his partner, Cheryl Burke. So they tried slimming them down.

“With Terrell, his traps are very muscular so when he lifts his arms up, it’s like lifting weights for him,” she wrote for Us Weekly “so I told him to cut down on the gym a little bit and if anything, use resistance bands to continue to bring his arms up.”

Next: This dancer said his partner need to create a new set of these to do the show. 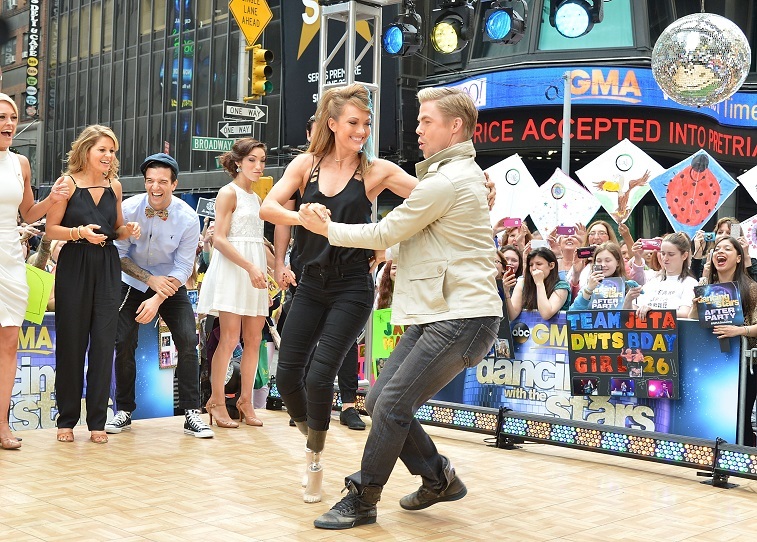 They went through a unique process to create her prosthetics for the show. | Slaven Vlasic/Getty Images

The para-snowboarder’s preparation for the show involved getting a new set of prosthetics.

“We literally had to invent and work with prosthetic doctors to create different feet and legs and that was pretty extraordinary,” Derek Hough told Entertainment Weekly. “For me, it was more extraordinary to see her eyes light up when she realized she could do things she never thought she could do.”

Next: This dancer said her partner was scared to return to the show.

13. Karina Smirnoff said Apolo Ohno was very scared to do All Stars 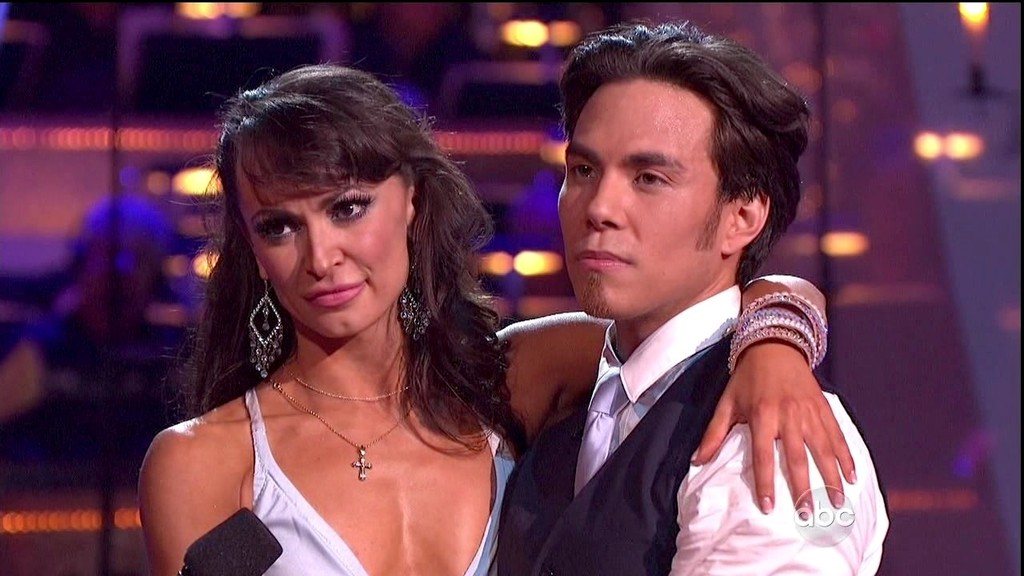 He was hesitant to return for All Stars. | ABC

The Olympian won Season 4, but he was still nervous to return.

“Apolo said he’s really, really nervous,” she told Us Weekly in 2012, “He thinks the show has really, really progressed from earlier seasons in terms of the level of choreography, the difficulty and the technique, so he’s like, ‘This is not the same!”

Next: This dancer said this person’s height hurt his chances. 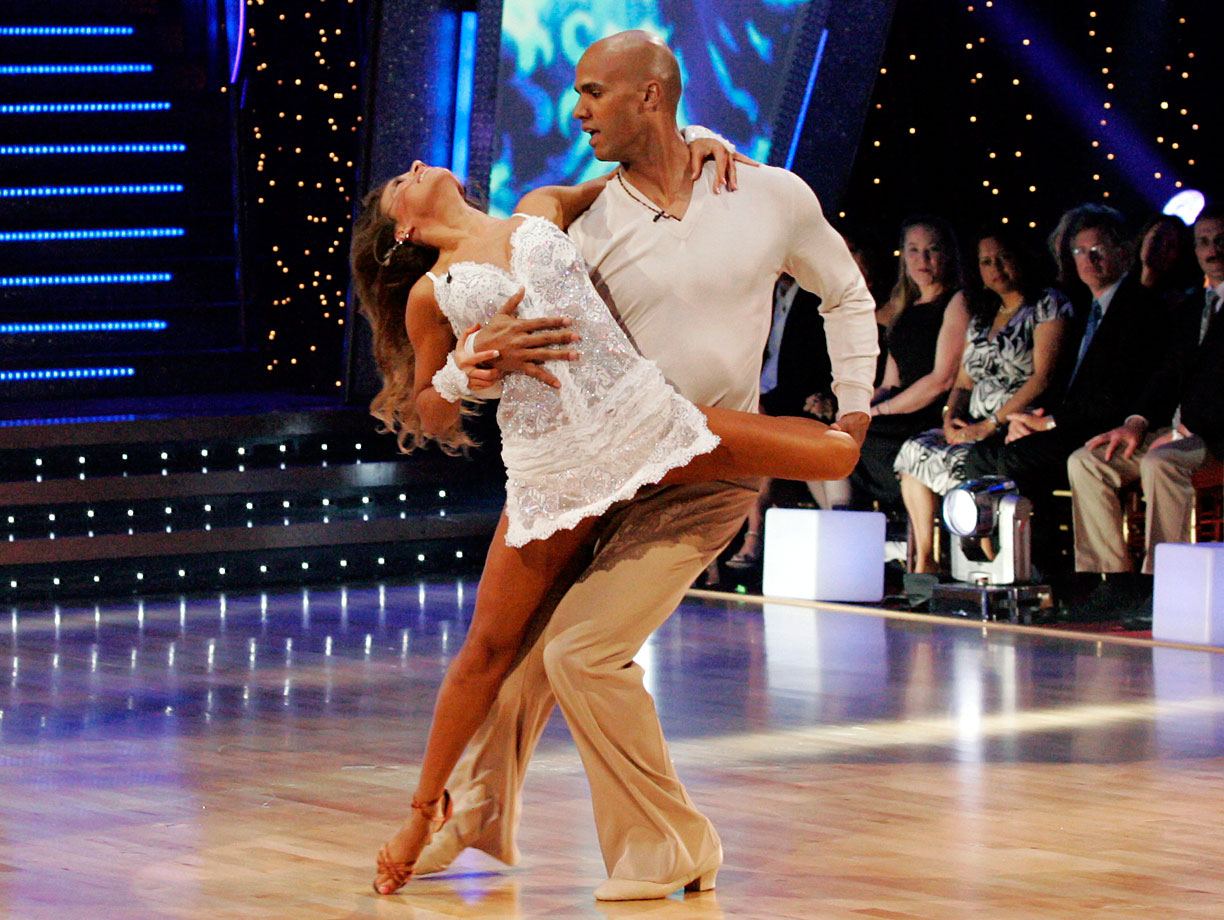 A tall athlete with a short dancing partner can be difficult. | ABC

The NFL defensive end was the runner-up on Season 6 with Edyta Śliwińska. Although he did very well, the dancer said, “Although he’s very, very tall, which is a certain disadvantage, he learned very quickly,” according to M Live.

Next: This dancer blamed the athlete’s feet for his bad dancing.

11. Cheryl Burke said Rick Fox’s feet got in the way 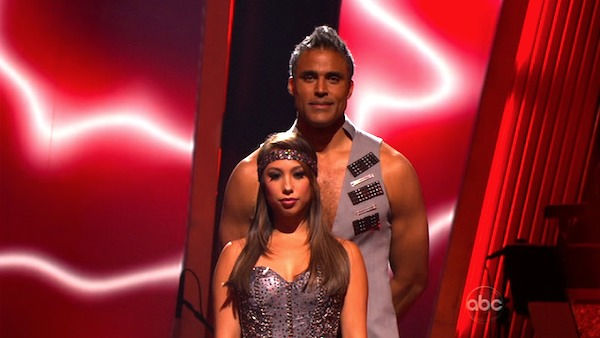 Fox and Burke had a huge height difference. | ABC

The dancer and NBA player had a big height difference between them, so that affected how they danced together.

“The first day, I was a little nervous. Everything about him is big. His feet got in the way. It was a disaster the first few days,” she said, according to Wetpaint.

Next: This dancer said her athletic partner got massages for the show.

10. Peta Murgatroyd said Donald Driver would get massages to be in good condition 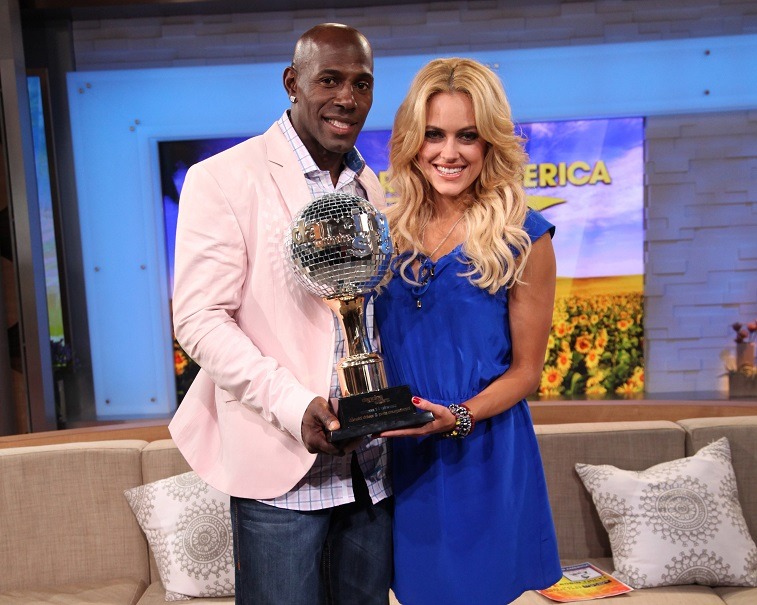 He was an especially dedicated contestant. | Taylor Hill/Getty Images

The NFL wide receiver ended up winning Season 14, and part of the reason for that was how he took care of himself. “He works out before he sees me every day,” Peta Murgatroyd said, according to Wetpaint. “He always makes sure his body’s in top condition and gets massages and stuff.”

Next: This dancer said her partner took baby ballet classes. 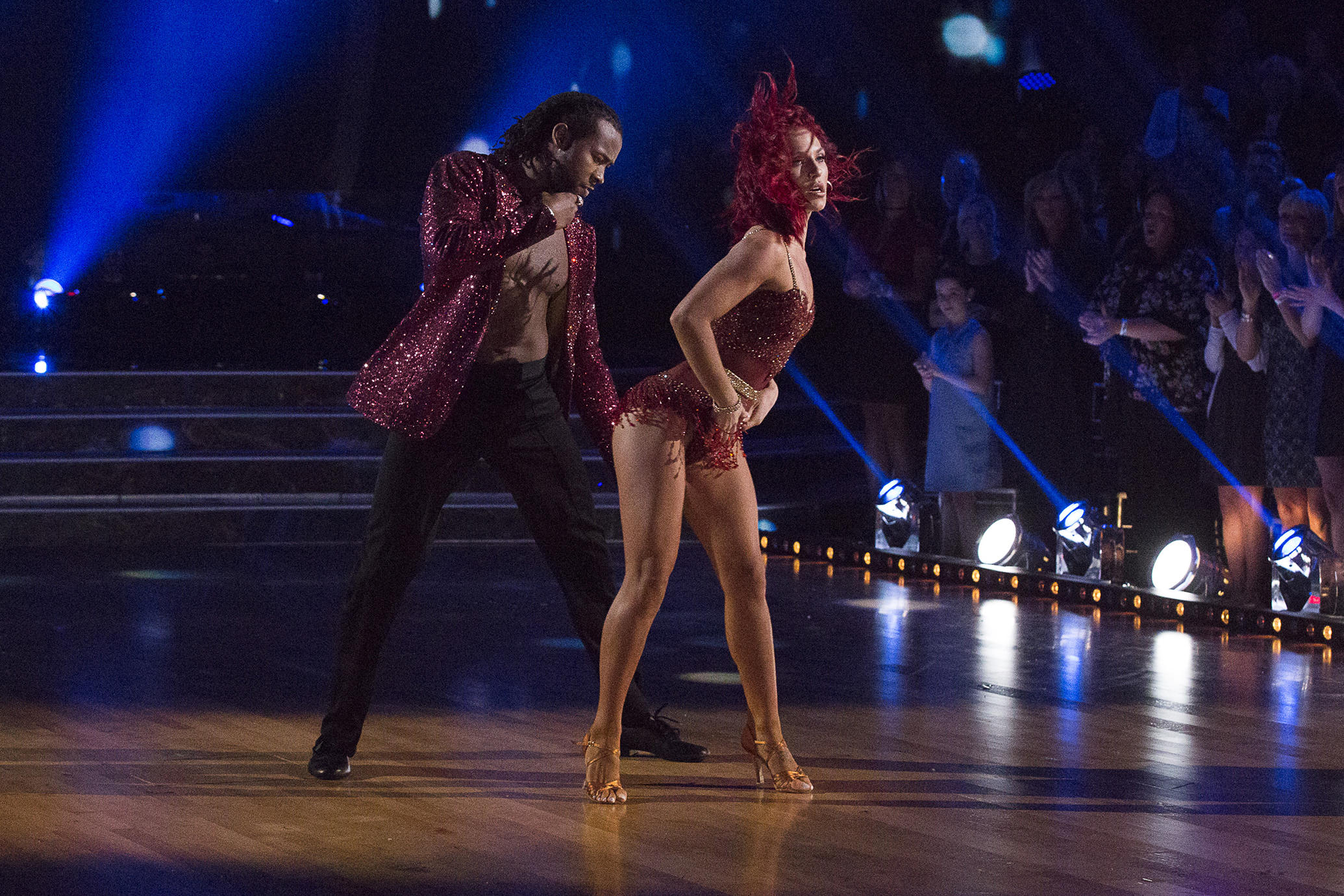 He’s not as much of a “bad boy” as he seems. | ABC/Kelsey McNeal

The professional dancer partnered up with Washington Redskins cornerback Josh Norman for the all-athlete season and revealed his reputation is misleading.

“He has this reputation on the field of being a bad boy, but off the field he really has a soft side,” she told Entertainment Weekly. “He really has something different to him, a sweetness, a humbleness.” She also said he was passionate about dancing and even took a baby ballet class to correct his posture.

Next: This dancer said her partner would prank her. 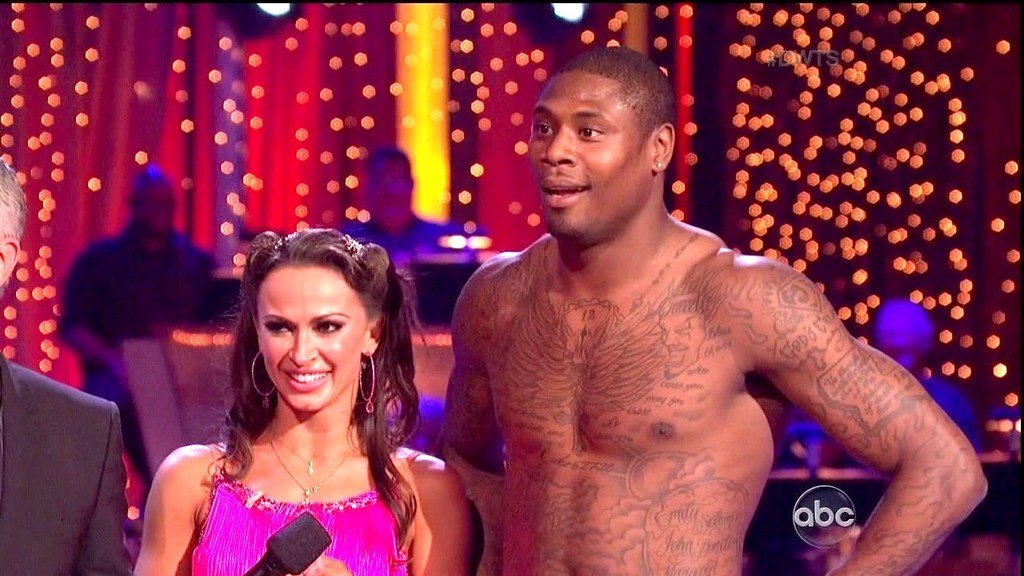 The dancer was always kept on her toes with Jacoby Jones’ pranks.

“I really hope they show Jacoby’s prankster side,” she told Parade. “Because he will literally hide behind corners and scare the life out of me. He’ll come up with pranks when we’re about to go live, and my knees nearly buckle.”

Next: This reality star threw a special party for his partner. 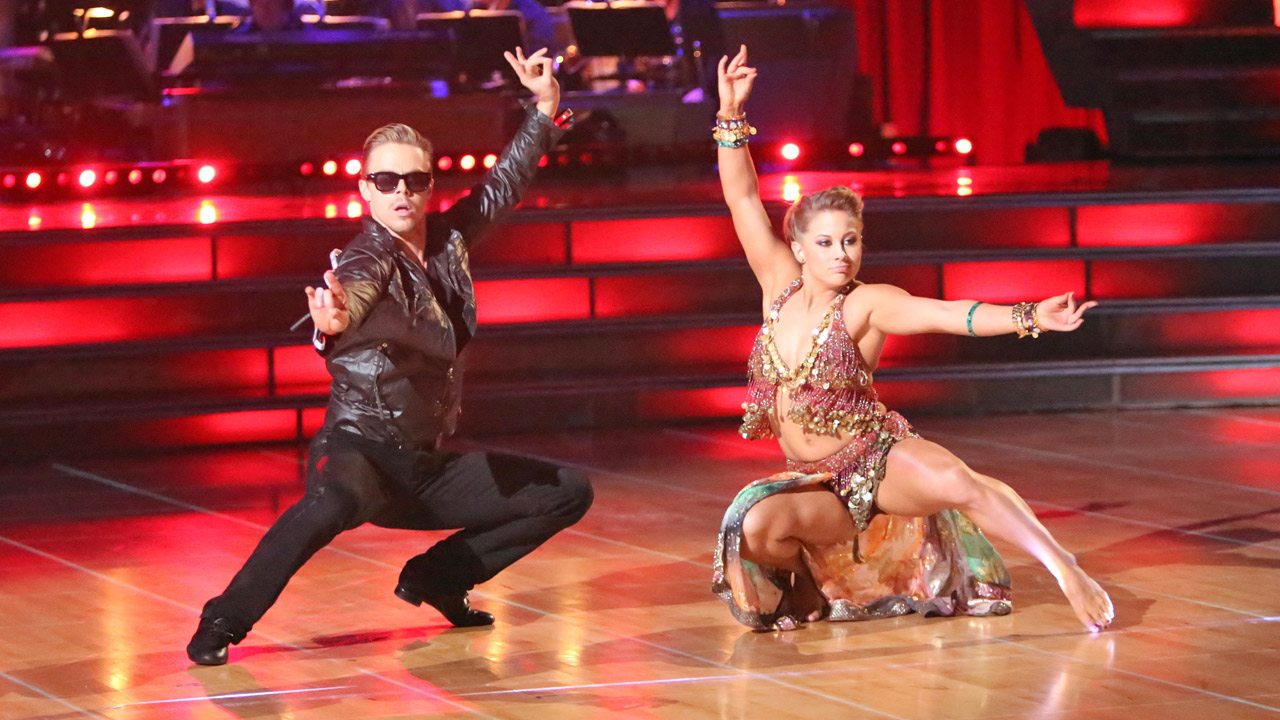 Shawn Johnson missed her real prom in order to compete, so Mark Ballas threw a prom for her during one of their rehearsals. “She won’t have some guy stepping on her feet!” he joked.

Next: This dancer said her partner started practicing with this household item.

6. Kym Johnson said Hines Ward started practicing with his pillow by himself 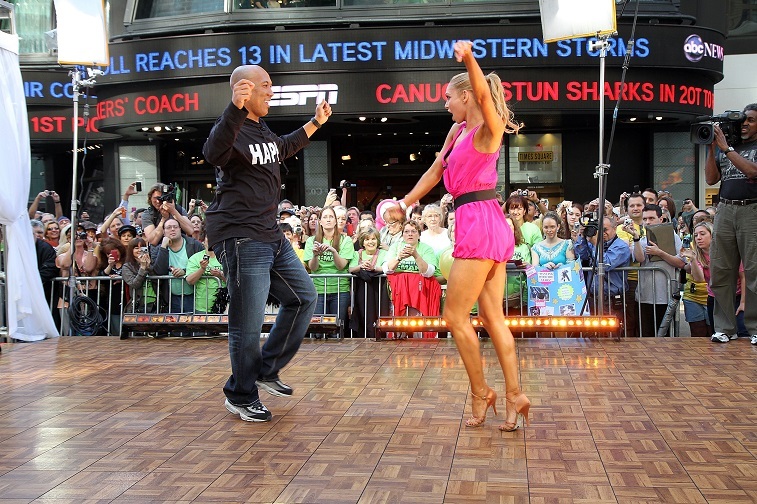 Ward practiced at home to get better. | Taylor Hill/Getty Images

Hines Ward won his season and it seems his secret was practicing at home with a pillow. Believe it or not, his partner didn’t tell him to do that.

“He just started that himself,” Kym Johnson told TV Guide. “It’s pretty difficult to get someone to keep working on the dance when they go home. He’s so dedicated that it’s great that he goes home and works on the routine. He’s always improved by the next day, which is great.”

Next: This dancer said her partner was the first to do this.

5. Karina Smirnoff said Sean Avery was the first partner to set up a place for her to stay 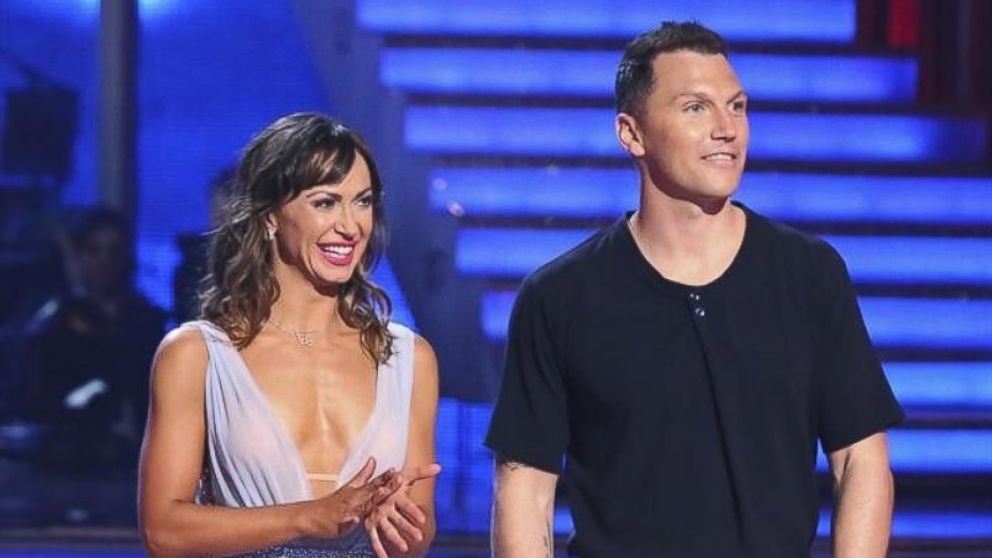 Avery made a very kind gesture toward his dancing partner. | ABC

The dancer worked with the NHL player in Season 18 and the experience included a first. She told him she planned to drive to their rehearsals.

“He organized a place for me to stay that’s closer [to the DWTS studio,] ” she told OK! “I’ve never had a partner do that!”

Next: This dancer definitely didn’t get along with this partner. 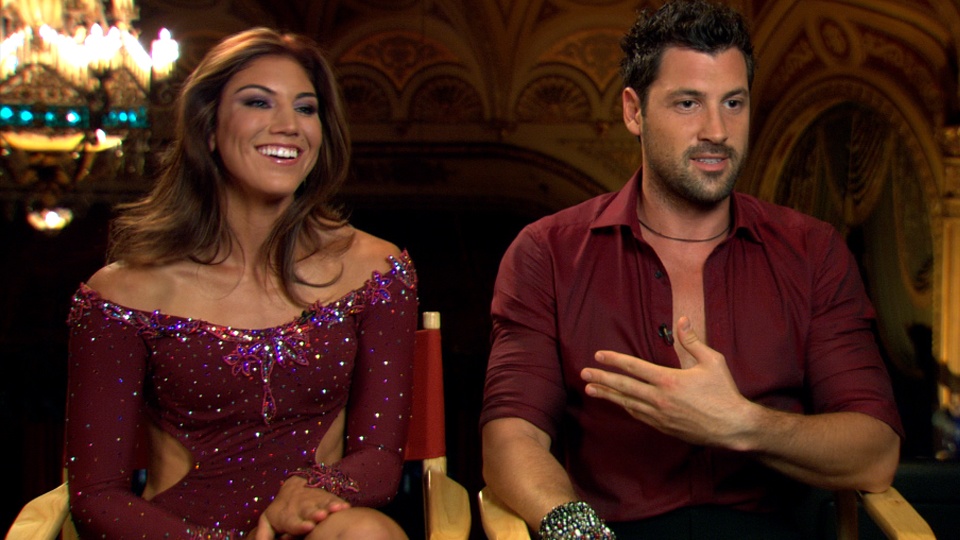 They did not have a good relationships during the show. | ABC

Hope Solo worked with Maksim Chmerkovskiy but apparently, the partnership wasn’t a good one. Chmerkovskiy referred to her as a “sh*tty person” on the podcast, Allegedly.

He then explained, “You can have a sh*tty life growing up, but if you’re a bad person, there’s no excuse for that.”

Next: This dancer stopped dating this athlete when this happened. 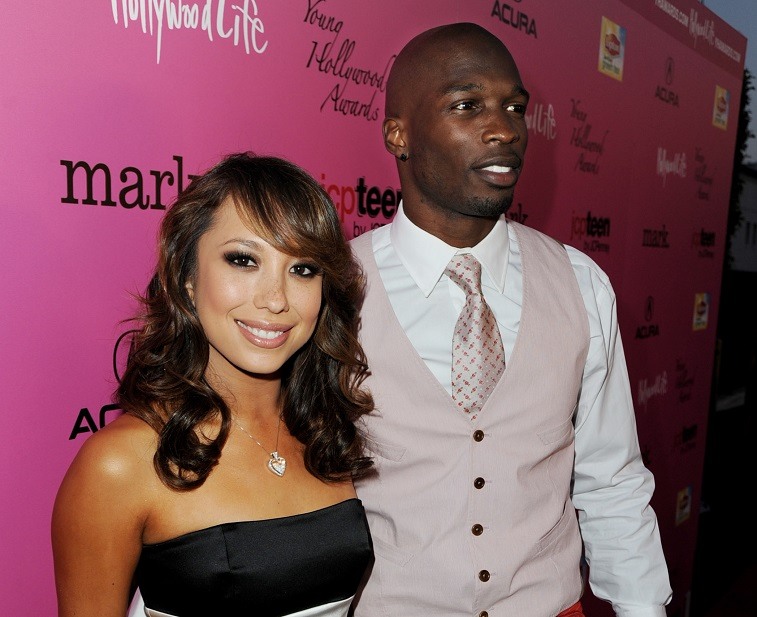 The professional dancer started getting romantically involved with Chad Ochocinco after they danced together. But the thing that changed her mind is pretty surprising.

“He did some dating show [VH1’s Ochocinco: The Ultimate Catch]. I started to realize this wasn’t the person for me,” Cheryl Burke told Us Weekly. “But I kept the diamond necklace he gave me for my birthday!”

Next: This dancer said this partner didn’t want to listen to a woman. 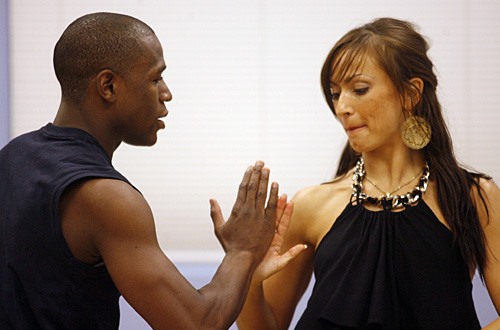 The professional dancer said there were multiple things hindering the boxer on the show, and one of them was being coached by a woman.

Next: This dancer said the show misrepresented his week with his partner.

1. Derek Hough said Nastia Liukin was misrepresented to fit a narrative on the show 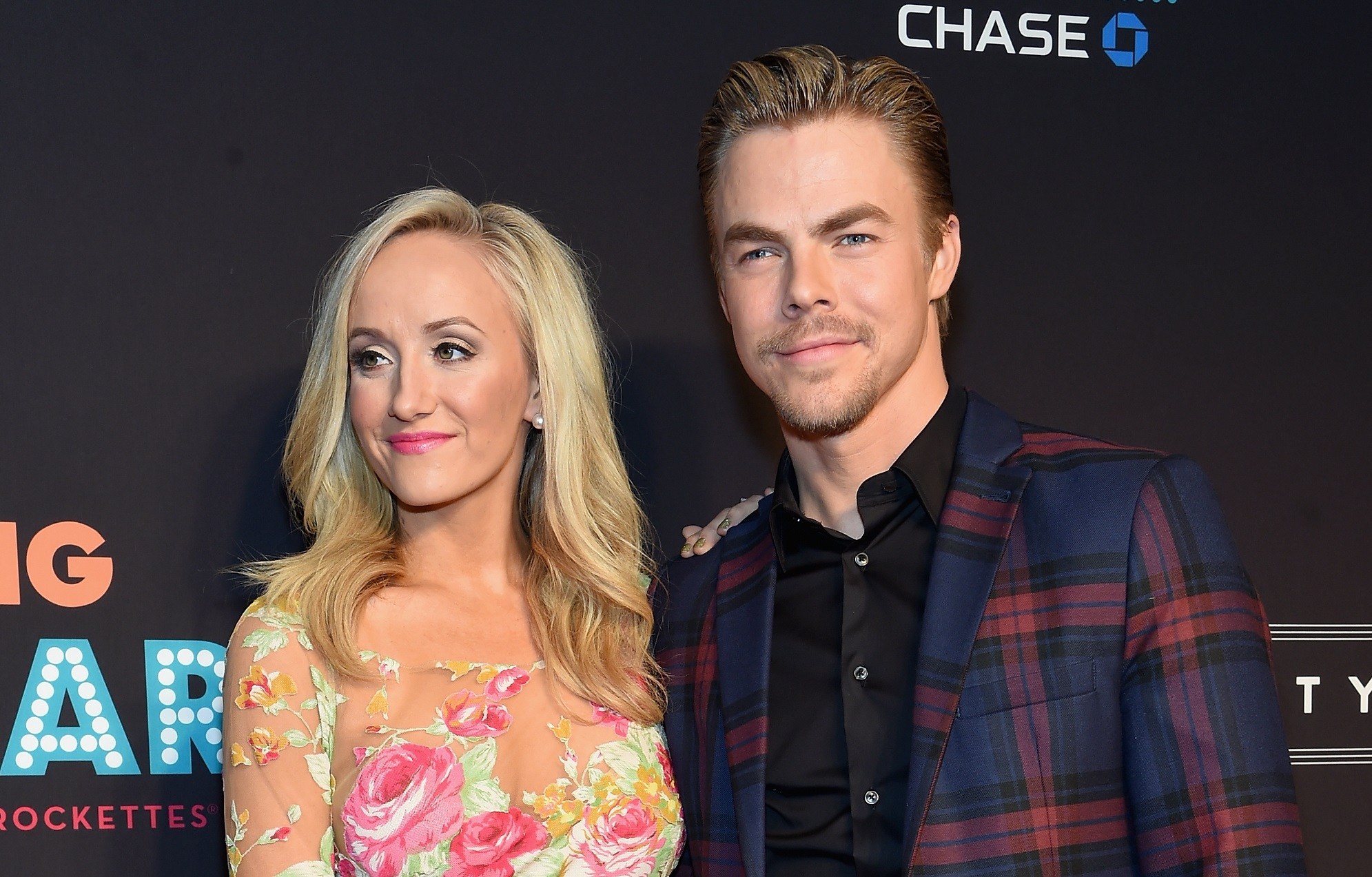 The reality show often has to find a storyline to tell in every episode. But Derek Hough wasn’t really happy with how that was done to his dance partner, Nastia Liukin. He wrote for TV Guide, “I know how the show works and they like to build narratives and everything, but last week was the first time Nastia and I had a chance to bond.”

The first day of rehearsal we had rehearsed so hard, but in the eighth hour of rehearsal, she was tired and the producer was asking her a question that had nothing to do with the show and what we were doing. She was like, ‘I’m tired.’ They kept pushing her because they wanted her to react and she did, and that’s what they played. When they played the package before our dance, we both looked at each other, like, ‘What was that?!’ We really did have such a great week.

Read more: ‘Dancing with the Stars’: 25 Celebrities Who Refused to Appear