Daniel Radcliffe is returning to the world of fantasy films, but this time, with a much darker twist. In the teaser trailer for his upcoming horror thriller, Horns, the former Harry Potter star shows off a more evil-looking side as he faces murder accusations, fire, snakes, and even sprouts — as the film title implies — devil-like horns.

The creepy flick is based on Joe Hill’s international bestselling novel of the same name and stars Radcliffe as Ig Perrish, a 26-year-old man believed to be the top suspect in the violent rape and murder of his girlfriend, Merrin (Juno Temple). A year after Merrin’s death, Ig wakes up from a night of hard drinking to find that he’s sprouted a set of horns (a discovery’s that’s sure to make any bad hangover much, much worse). But it turns out, the horns give him the power to drive people to confess their deepest sins and give into their most selfish impulses. Ig soon realizes he must use the horns to help figure out who his girlfriend’s real killer is and exact revenge for her murder.

This is the first glimpse we’ve gotten of the movie, directed by Alejandre Ala (The Hills Have Eyes), with the exception of a short clip released last fall. Though the clip is short and fails to dive too deeply into the plotline, it does show Ig shielding himself from the public as they call him a murderer and a devil. You don’t really get a good look at Radcliffe wearing his horns until the last few seconds of the trailer, but the brief sneak peek is more than enough to freak anyone out — and make all avid moviegoers wish they didn’t have to wait any longer to see the film. 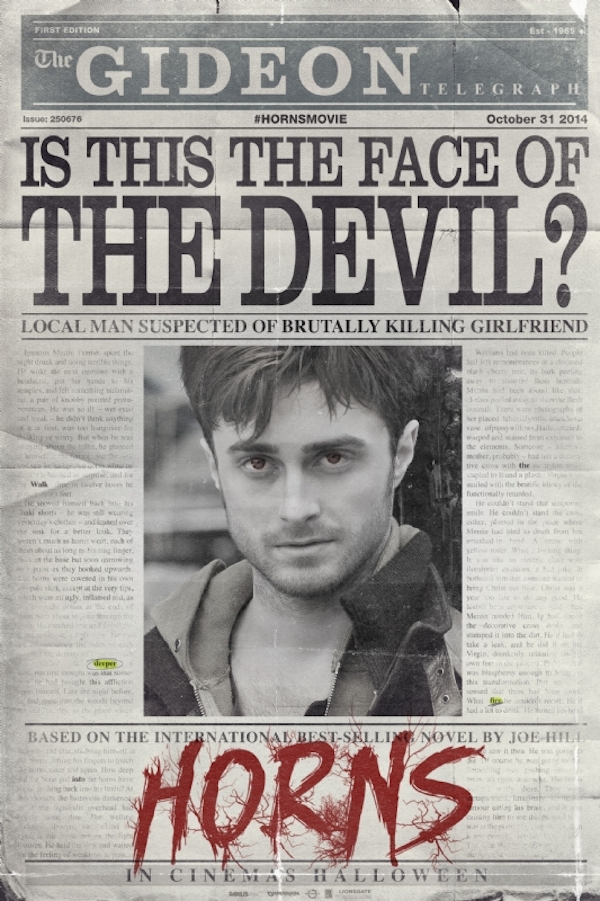 The teaser trailer comes on the heels of the release of an equally haunting promotional poster for the film earlier this week. The poster features a close-up snapshot of Radcliffe as Ig on the cover of a newspaper article about the murder under a headline that asks, “Is this the face of the devil?”

Both looks at the film are sure to excite fans of the book, who have long since been awaiting news of the movie’s release. Though Horns finished production in 2012, it didn’t make its premiere until 2013, at the Toronto International Film Festival. The film earned mixed reviews at the time and not much more was heard about it until this week, when the studio finally gave viewers the trailer they’ve been waiting for. The movie is slated for release in the U.K. on Halloween, which is appropriate, given the film’s plot. The official U.S. release date has not yet been confirmed, but the movie’s actors are set to hit San Diego Comic Con next week, so perhaps an announcement will be made then.

After this first glimpse of the adaptation, though, it’s clear the film can’t come soon enough for fans waiting to see see Radcliffe (who has gone on to make a wide variety of post-Harry Potter choices, including starring in indie film Kill Your Darlings and the Broadway musical How to Succeed in Business Without Really Trying) take on the edgier and chilling role.