Queen Elizabeth has spent the majority of her life sitting on the throne and representing the British Crown. In 1952, she was just 25 years old, a young mother and wife, when her father, King George VI, died and she was appointed to the throne. Over the course of her time as monarch, the queen has witnessed wars, assassinations, hardships and so much more. Though she’s known for her rigid regal nature, she hasn’t exactly been able to escape scandal.

Here are some stunning secrets you never knew about Queen Elizabeth’s life.

Queen Elizabeth II was never supposed to be queen. In fact, she was supposed to live out her life on the sidelines of the public eye. However, that all changed drastically when her uncle, King Edward VIII, abdicated the crown and was succeeded by her father, King George VI.

Queen Elizabeth was just 10 years old when the course of her life changed forever.

Next: A terrible tragedy

Here’s how she learned of her father’s death. | AFP/Getty Images

Queen Elizabeth never expected to take the throne at such a young age. In fact, she was completely oblivious about the state of her father’s health. Unfortunately, nearly everyone on earth found out about his death well before she did.

King George VI died sometime in his sleep on Feb. 5, 1952. However, Queen Elizabeth and her husband, Prince Philip had embarked on a royal tour at the behest of her father and were in the remote Treetops Hotel in Kenya’s Aberdare National Park when the news broke.

According to Time, “She breakfasted on bacon and eggs and tossed bananas to baboons below. It wasn’t until early afternoon that a reporter from a local newspaper called and told Philip that King George had died.”

Next: Rolling the dice

You can catch the queen at a horse race. | Lewis Whyld/PA Wire

It’s well known that the queen loves her horses, but we bet you didn’t know that she had a penchant for gambling. Queen Elizabeth II has made quite a bit of money over the years on her prized animals.

Radar Online reports that in the last three decades, the British Horse Racing Authority shows that the queen has made $8.8 million off of her thoroughbreds.

We didn’t know queens could gamble.

Next: A monarch, not a mother

She had royal duties to attend to. | AFP/Getty Images

The eldest of the four, the future King of England said in his 1994 biography by Jonathan Dimbleby that it was “inevitably the nursery staff who taught him to play, witnessed his first steps, and punished and rewarded him.”

Next: A ban on pots and pans

The royal chef has to make due with what he has. | Dan Kitwood/Getty Images

Though Queen Elizabeth is worth millions of dollars and is said to be very fair especially with her staff, she still has a bit of a cheap streak. In fact, it’s the chefs in the royal household that feel the brunt of her frugality.

Radar Online reports that the queen refuses to allocate any money towards kitchen supplies. It’s so bad that the cooks are forced to use pots and pans from the 1800s that still have Queen Victoria’s stamp on them.

Living in the darkness

The queen’s frugality often means that she and her staff are living in darkness.

A former royal aide told Radar Online, “Sometimes she goes from room to room turning off lights. Often huge palaces only have one light on. And for all the chandeliers in the palace, you never see any of them lit up except for special occasions.”

A least the queen cares about the environment.

Queen Elizabeth may be frugal, but not when it comes to appeasing her family. | Saul Loeb/AFP/Getty Images

It is said the queen feels a great deal of guilt over being called to serve her country over raising her children. Therefore, though she’s very tight with her own budget, she indulges her children out of guilt.

A former cleric explained to The Telegraph,

In her own financial matters, she is tight, but she’s been very extravagant with her children – she’s indulged them terribly. She allowed Andrew and Sarah to build that house in Ascot when there were perfectly good homes available elsewhere. So far as I could see, they couldn’t have cared less about the budget, but the Queen didn’t come down on them; she just paid up, and that was very wrong. On that count, she’s guilty in spades.

Her husband, her cousin

Since the royals are known to intermarry, it’s probably not shocking to most that Queen Elizabeth and Prince Philip, Duke of Edinburgh are third cousins.

According to Time, they met when the queen was 13 and the prince was 18. The young Elizabeth was utterly enchanted with her husband from the very first time they met.

Next: Some awful Nazi ties 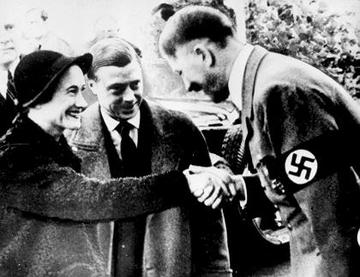 A royal scandal for the books. | BBC via Wikicommons

It’s bad enough that King Edward VIII abdicated the crown, but Queen Elizabeth II was devastated to discover that he and his wife Wallis Simpson were also Nazi sympathizers. Simpson had a love affair with a Nazi before meeting Edward, and the former king was very proud of his German heritage.

As a result, the couple went as far as to visit Hitler in Oct. of 1937. Apparently, Hitler desperately wanted Edward back on the throne so that he could act as his puppet.

Next: Bending to his will

A war of wills

When Queen Elizabeth was officially crowned in 1953, the duke did not receive a title change. In fact, he did not become a prince until 1957, but at the queen’s coronation, he dedicated himself to her.

According to the BBC, he said, “I, Philip, Duke of Edinburgh, do become your liege man of life and limb, and of earthly worship; and faith and truth I will bear unto you, to live and die, against all manner of folks. So help me God.”

The years following his wife’s coronation were not easy for Prince Philip, who grew up at a time when men had the final say. Apparently, he felt emasculated and restless. The sophomore season of Netflix’s The Crown depicts the tension in the royal marriage.

The prince was given a new title by his wife in 1957 in hopes that it would ease the mounting tension in their marriage.

Next: A broken lineage

When things changed, she stepped up to become Queen. | Terry Disney/Express/Getty Images

The proper royal chain was shattered well before Queen Elizabeth’s uncle decided to risk it all for love. In 2012, 500 years after the death of Richard III, his remains were uncovered. After the DNA testing was done, scientists discovered that they could not link the remains to any paternal relatives.

This means that somewhere along the line, someone had an affair and an illegitimate heir was put in power. If you think about it, this means that Queen Elizabeth II actually has no business ruling.

Next: Rumors of infidelity

According to rumors, Prince Philip had an affair. | AFP/Getty Images

It has been rumored that over the years, Prince Philip hasn’t exactly been faithful to the queen. There have been many whispers about the Duke of Edinburgh’s various relationships with other women.

There was a report in The Baltimore Sun that stated that the prince was “romantically involved with an unnamed woman whom he met on a regular basis in the West End apartment of a society photographer.”

There has never been any evidence of his infidelity, but even The Crown nods towards it.

Next: Ignoring the bad

Turning the other cheek

She doesn’t get involved in her family’s private business. | Chris Jackson/Getty Images

The ’90s were a rough era for the royals. Princess Anne divorced her husband after he fathered a child outside of his marriage, Prince Andrew divorced Duchess Sarah Ferguson after she was photographed getting her toes sucked by an American business mogul, and of course, Prince Charles and Princess Diana’s marriage crumbled.

The future king had long since been carrying on an affair with his now wife, Camilla Parker Bowles, and everyone including the queen knew. Some blamed Queen Elizabeth for not putting a stop to it.

A royal insider told The Telegraph, “It spoke volumes that the Queen did nothing about the fact that her son was sleeping with a married woman, when she was the one person in the world who, I knew from experience, could have done something about it.”

Next: A reluctant matriarch

Never putting her foot down

She isn’t as strict as she looks. | Fiona Hanson/AFP/Getty Images

Though the queen was more than capable of handling the business of the crown (including her many wayward Prime Ministers), she found being the head of her family much more difficult, which annoyed the royal staff. A former palace press secretary revealed to The Telegraph,

She was always terribly diffident on family issues. She doesn’t like rows and is in no way a feminist, so she was more than happy to leave everything either to her husband or us. You’d put a family issue to the Queen, and she’d say, “Have you asked Philip, Charles, Andrew?” – whoever it happened to be – and you felt like saying: “No, Ma’am, it’s up to you.” But she always wanted someone else to do it, because she knew there’d be a humdinger of a reaction. It was left to courtiers to take the flak.

Next: A puzzling future

Has she prepared her family for the future? | Chris Jackson/Getty Images

Since much of the queen’s focus in her life has been making sure the country runs smoothly, she has not prepared herself, her family, or her country for a smooth transition once she steps down. According to one of Prince Charles’ aids, it has been one of her most significant failings.

They revealed to the Telegraph, “In some ways, the Queen has behaved as if she is the only one who matters. She has not planned for the future very well – she almost seems to see herself as the last sovereign. Everything has been about what was good for her, not what was good for the monarchy in the long term.”