Every Saturday for over 40 years, people around the country have tuned in for America’s most famous late-night sketch comedy show, Saturday Night Live. With its outstanding talent, fantastic hosts, and incredible musical guests, SNL has birthed the careers of industry titans, including Eddie Murphy, Chevy Chase, John Belushi, Adam Sandler, and many more.

Despite its legendary status, SNL hasn’t always been laughter and sunshine. Sometimes, things on stage and behind the scenes have been pretty terrible. From bottles full of urine (yes, urine) to misogyny and horrific deaths, here are 15 secrets you never knew about Saturday Night Live.

In the ’80s at the height of the HIV/AIDS epidemic, Chevy Chase thought it would be funny to tell a horrific joke at openly gay cast member Terry Sweeney’s expense. Chase said, “He should be weighed every week to see if he has AIDS.”

He told the joke live and on-air. Michaels was horrified and disgusted by Chase’s comment and forced him to apologize to Sweeney immediately.

Next: No one should be able to treat interns like this.

2. Norm Macdonald threw an intern across a room

Former cast member Norm Macdonald was playing soccer in an SNL hallway with Wyatt Cenac of The Daily Show and People of Earth. Cenac was an SNL intern at the time. Things went bad when Cenac accidentally kicked Macdonald in the shin. Cenac told Stephen Colbert on The Late Show, “He grabbed me, tried to throw me across the room, which is not how soccer is played. And I pushed him off me.”

Things escalated into a shoving and screaming match until cast member Colin Quinn, and Colbert, who was an SNL writer at the time, broke it up. Now, Cenac thinks this incident occurred because an agitated Macdonald was trying to quit smoking.

Next: Behind the scenes, this cast member struggled with horrifying acts.

Called the greatest impressionist in Saturday Night Live history, Darrell Hammond was Trump before Alec Baldwin stepped in. After 14 seasons on SNL, Hammond was booted off unceremoniously, which broke his heart.

Although SNL fans adored him, Hammond struggled from his abusive childhood and bouts with addiction. He cut himself backstage when the pressure became too much and was once taken from the studio to a psychiatric ward.

Next: The hiring and firing process is more confusing than you’d think.

The show has let go a ton of comedians not because they weren’t funny, but because they didn’t know how to write for television. To ensure your survival on SNL, you must learn to collaborate with other writers. Rachel Dratch once said, “I don’t think people realize how much you have to write for yourself [for the show].” If you can’t figure it out, then you’re handed your walking papers.

Sometimes people get their pink slips out of the blue. Adam Sandler still doesn’t understand why he and Chris Farley were randomly let go in the ’90s.

Next: Chris Farley was more desperate than people thought.

5. Chris Farley tried to save himself 17 times

Before his tragic overdose in 1997 at the age of 33, Farley desperately tried to get clean. In the two years leading up to his death, Farley entered rehab 17 times. The last time was for a single night during the week before he died. After Farley passed away, the medical examiner found morphine and cocaine in his system.

Next: SNL may be cursed with painful deaths.

As for the other three horrifying deaths, Charles Rocket killed himself by slicing his throat with a box cutter. Michael O’Donoghue had a cerebral hemorrhage, and Phil Hartman was murdered by his wife before she turned the gun on herself.

Next: SNL banned this comedian from the show forever.

7. A fistfight, abuse, and a lifetime ban

Though part of the original cast, Chevy Chase abruptly left SNL during the beginning of the second season, and Bill Murray replaced him. Chase returned years later to host the show — the first cast member to do so — and he was a nightmare. He refused to work with Jane Curtin on Weekend Update, and he was rude, abusive, and nasty to the writers and cast. He even got into a fistfight with Murray minutes before the show started.

The final straw occurred in 1997 when he slapped Cheri Oteri on the back of the head “as a joke.” SNL creator Lorne Michaels banned him for life.

Next: The pressure got to this lying comedian.

In 1993, Jay Mohr became a cast member on SNL. Desperate to stand out, he struggled with the high pressure of the show, as well as coming up with good content. In his 2004 memoir about SNL, titled Gasping for Airtime, he admitted to stealing a stand-up routine from a well-known comedian.

The higher-ups found out, and they fired him by the end of the season. Mohr is still terribly ashamed of what he did.

Next: No one should have to endure this disgusting prank.

This secret isn’t especially dark, but it’s still horrifying. Tina Fey revealed this tidbit of information in an interview with The New Yorker in 2011. The 30 Rock alum said she realized cups of pee were scattered around the writer’s room, even though the bathrooms were next door. She told The New Yorker:

In the Weekend Update offices — which were like the smarter but meaner older brother of the regular writers’ offices — there weren’t any cups. There was a jar. It was a jar of p*ss with a lid on it, and, judging by its consistency, I suspect that the writers sometimes spat into it. Or that one of them was terribly ill. You could see it when you came in the door, backlit by the afternoon sun, and at first, I thought it was a test. If you saw the p*ss jar and dared to ignore it and continue into the room, you were welcomed. “Welcomed” is too strong a word. You were … one of the guys? Nope, you know what? I’m just projecting. It couldn’t have been a test, because they really didn’t give a f*ck whether you came into the room or not.

Why is this happening?! Hygiene is so important.

Next: This iconic comedian couldn’t handle his female counterparts.

Though many call him one of the greatest comics of a generation, the late John Belushi received flack for being sexist and a misogynist. While he participated on SNL, Belushi refused to take part in any sketches written by women.  He was even vocal about being unimpressed by his fellow female comedians. Comedian Jane Curtin told Oprah Winfrey, “He felt as though it was his duty to sabotage pieces written by women.”

Next: This comedy star couldn’t handle the intense SNL lifestyle.

As one of the most beloved SNL cast members of this generation, Andy Samberg shocked everyone when he didn’t return to the series after 2012. The Brooklyn Nine-Nine star never even told his castmates he was leaving. So what happened?

As much as people loved Samberg, he said the show was killing him. He later confessed, “What it came down to was I just couldn’t physically and emotionally do it anymore.”

Next: David Spade pissed off the wrong guy.

12. Eddie Murphy flew into a fit of rage at David Spade

From 1980-1984, Eddie Murphy was the youngest and biggest star on Saturday Night Live. The comedy legend left to pursue the big screen and appeared in everything from Beverly Hills Cop to The Nutty Professor. However, in the mid-’90s, Murphy’s personal life began to overshadow his success, leading to a stall in his career.

During that time, comedian David Spade was on SNL. While referencing a photo of Murphy, he said, “Look, children, it’s a falling star!” It was hilarious … but Murphy didn’t think so.

In his memoir Almost Interesting, Spade said Murphy called him screaming and ranting.

David Spade, who the f*ck do you think you are?!! Honestly? Who. The. F*ck. Going after ME?? You dumb motherf*cker! I’m off-limits, don’t you know that? You wouldn’t have a job if it weren’t for me. Talking sh*t about me?

Luckily, the two have since mended fences.

Next: This SNL cast member is limited for the rest of his life.

After leaving SNL back in 2003, Chris Kattan seemed to fall off the radar. He recently competed on ABC’s Dancing with the Stars, and he revealed the reason why he left the sketch comedy show was that he broke his neck during “a stunt thing.”

Still devastated by the accident, Kattan could not bring himself to discuss it further, but he did say that he’s had four surgeries to try to correct the problems which have left him in constant pain.

Next: Cast members made it clear no one wanted this guy to host the hit show.

Andrew Dice Clay, aka “The Diceman” as many called him in the ’80s and ’90s, came to fame as an offensive, foul-mouthed comedian who loved racist and sexist jokes.

The Diceman hosted SNL in 1990, which caused an uproar from the cast. Castmember Nora Dunn refused to appear in the episode and the planned musical guest Sinead O’Connor pulled out. Apparently, the audience wasn’t too thrilled to see him either — many of them shouted “go away” when Clay appeared onstage.

Next: SNL salaries aren’t as hefty as you imagine. 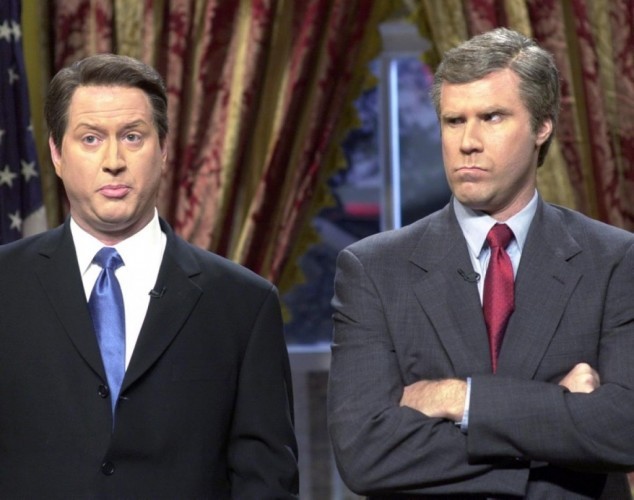 Many SNL cast members have left the show recently — and for a good reason. During their first year on SNL, cast members make an annual salary of $60,000. That increases each year, and casts members receive bonuses for sketches they write that makes it on the air.

However, if NBC offers you a sitcom, you’re allowed to reject the first two offers, but you must take the third. To this date, Will Ferrell is the show’s highest paid cast member. He made $350,000 in 2001.