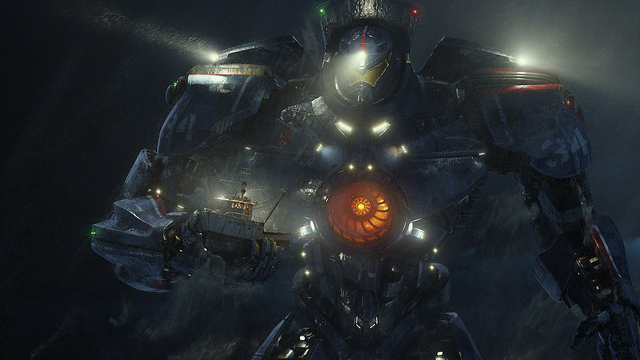 Godzilla may have been a big, bad Kaiju-killer and been able to shoot some sort of nuclear fire beam out of its mouth, but it didn’t have a sword and plasma cannon built into its arm, nor ejectable coolant, nor a nuclear reactor, nor escape pods to allow Raleigh Becket and Mako Mori to get away as they nuke the Kaiju home planet, nor does it have a confirmed sequel coming out April 7, 2017.

That’s right — Guillermo del Toro’s Kaiju-mashing blockbuster, Pacific Rim, is getting a sequel in a little under three years, according to his YouTube post. Thanks to the global success of the first film, Del Toro will be jumping back into the director’s chair for a second. According to Box Office Mojo, the original has made $411 million worldwide, though less than a quarter of that came from the U.S. box office. That’s a major payday for the film’s producers. However, some things will be different the second time around.

Though Del Toro will be returning to direct and work on the script once again with writer Travis Beacham — joined by writer Zak Penn, who worked on great action flicks like The Avengers, X-Men 2, and Behind Enemy Lines – Pacific Rim 2 won’t be distributed by Warner Bros., according to The Hollywood Reporter. Since a pact between Legendary and Warner Bros. ended, Universal gets to cash in on the film. Fortunately for audiences, this shouldn’t result in the degradation of the film. Sadly, this announcement may lay to rest some of the hopes fans had of certain plot lines for a sequel.

For fans of the film, when the credits started rolling, the first thing going through your head was probably something along the lines of “there’s definitely going to be a sequel.” But maybe your mind wasn’t to careful with wording, as many considered the possibility of a prequel even more likely. The concept of following Idris Elba’s character, Stacker Pentecost, as he fought Kaiju earlier in the battle for humanity’s survival probably appealed to many fans, but it seems that plot won’t be one for the movie.

There is at least the possibility of that plot showing up in an animated series. Along with the film’s announcement, Del Toro said that an animated series would be in production from now until the film’s premiere, and it will continue the story from the Pacific Rim: Tales From Year Zero comic books, which do cover some of Stacker’s history along with that of plenty of other characters.

Alas, Del Toro said, “a sequel for the film” and not “a prequel.” In an interview with BuzzFeed, he said, “The characters I love will return,” adding “Raleigh, Mako, Newt, Gottlieb and who knows, maybe even Hannibal Chau – but we are taking them into a fresh territory that will display amazing sights and battles. The first film set the stage and now we’re ready to have a blast.” Considering Stacker had blown himself up at the bottom of the ocean in the first film, it’s no surprise he’s not among those mentioned. It may be hard to figure what the future plot could be, since the humans seemed victorious at the end of the movie, but there’s plenty of wiggle room, and Del Toro may have already hinted at a plot point.

For one, there could have been plenty other Kaiju production areas beyond the one that was blown up. Also, though the first film might have led us to believe that the nuclear explosion closed the portal between worlds, it could quite possibly be open still. Del Toro also already seems to have a few things in mind.

In a much earlier interview, Del Toro said he had thoughts about a sequel in an interview with Independent.ie, stating, “the main idea that we’re bouncing off is the fact that Newt drifted with a Kaiju brain and all kaiju brains were connected.” If Newt knew what the Kaiju knew, then they knew what he did. That information that the humans exploited to attack the Kaiju could be turned around and used as a weakness for firing back at the humans in the sequel. There’s also the possibility of the bad guys coming back as a crossbreed of Kaiju and Jaeger. In an interview with MTV, Del Toro said, “We will have Gipsy 2.0 for sure. Second thing is you’re gonna see a merging of Kaiju and Jaeger.” In a hint, he added that “We sent Gipsy to the other side, right? It exploded, but whatever remains stays there.”

Of course, there’s been a lot of time for Del Toro and his writers to consider other plot directions for the film, and there still is more time, so it could go just about anywhere. The one thing that’s clear is that it should be going into the future, and not into the past and there will be “More Kaijus, more Jaegers, kicking each other’s butts.”