Ever since Kiefer Sutherland wrapped up his days of playing Jack Bauer, fans have been eagerly awaiting his return to prime time. Thankfully, the former 24 star doesn’t disappoint in his latest TV gig: playing the president of the United States in ABC‘s suspenseful fall thriller, Designated Survivor.

Chances are you’ve already seen the trailers for the show (or at the very least, deciphered the premise from its title), so I’ll just recap quickly: Sutherland plays Tom Kirkman, the secretary of housing and urban development who is slated to be the day’s designated survivor — aka the member of the U.S. Cabinet who is sequestered in a safe location as a precaution when the country’s top leaders are all gathered in one place. When an explosive attack during the State of the Union kills everyone above him in the presidential line of succession, Kirkman is thrust into taking over the highest-ranking office in the world.

While it’s certainly a compelling premise, it’s also a whole lot of plot to set up in a one-hour premiere. The pilot does a fair job of running through the checklist, smartly jumping right into the action instead of building up to what we already know is coming. The episode opens right into the room where Kirkman is being sequestered and it’s only minutes before the attack occurs and chaos breaks loose. Immediately, you want to stick around to see more — including the much less exciting, but nonetheless necessary, flashback to 15 hours prior to the attack, when Kirkman was still just an ordinary Cabinet member whom no one (much less the president) took seriously. 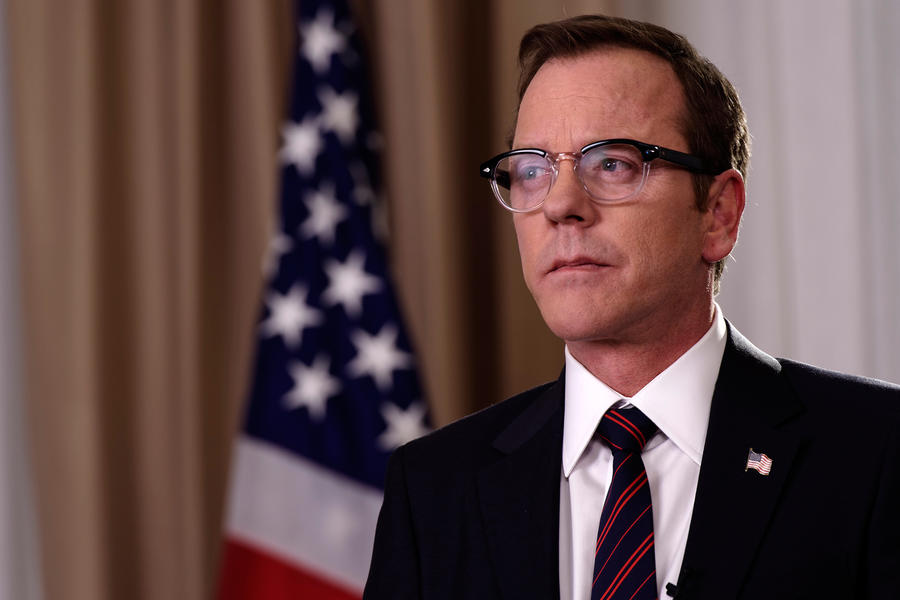 Fans should know that Sutherland is a far cry from Jack Bauer here. Kirkman is a nice, mild-mannered family guy who just wants to do the right thing and refuses to play by Washington’s rules. Unfortunately, that also makes him a bit of a pushover — both at home with his wife (played by Natasha McElhone) and two kids, Leo (Tanner Buchanan) and Penny (Mckenna Grace), and at work, where more aggressive players constantly walk all over him. His placidity is an even bigger problem once he’s appointed acting president, with everyone from the speechwriter (Kal Penn) to the irritating military advisor questioning his abilities to lead the country.

At times, the pilot is a bit too obvious about setting up Kirkman’s radical vault to the top. At one point during the flashback, he reminds his chief of staff of their lowly place on the totem pole by actually saying, “I am not the president of the United States.” Despite these overly literal moments, Sutherland is as solid as ever, making Kirkman likable while also hinting at an underlying toughness to the character.

But the pilot isn’t entirely about Kirkman and his family’s unexpected rise to power. There’s also the question of who instigated the terrorist attack, a task that falls into the hands of FBI agent Hannah Wells (Maggie Q). Though she and Kirkman never cross paths in the pilot, her suspicion that the attacks are far from over makes it clear that the two will collide sooner rather than later.

It remains to be seen whether Designated Survivor will be able to maintain the compelling premise it’s hinged on for a full season, but the drama’s strong debut shows plenty of potential.