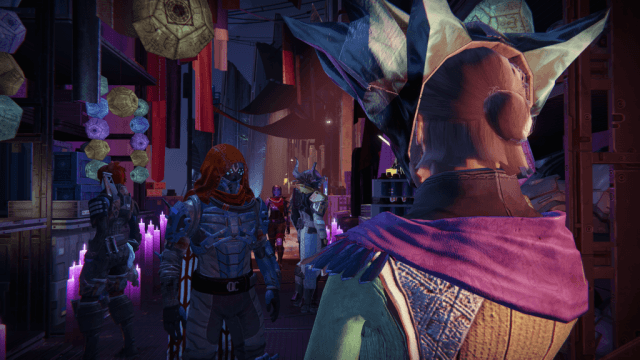 It’s Halloween on Destiny this week through November 9, and for you that means mostly treats… and quests.

After some modest fun last year with special events, the folks at Bungie are back with a huge update that offers new side quests, new rewards, and a whole bundle of cool sights to see. Even the home-base-like Tower got a makeover, complete with spooky candle groupings and some of your favorite NPCs wearing masks.

The in-game event(s), called the Festival of the Lost, sort of evokes the ethos of Dia de los Muertos (Day of the Dead); the idea that the in-game universe celebrates departed guardians (you and all the other real people) with masks, decorations, and yes, candy. Delicious, perk-laden candy.

There’s a precedent for holiday special content in video games. Even before seasonal updates added snow for the winter or skins for special holidays and events, games like Batman: Arkham City had easter eggs. In that game, visiting the imprisoned Calendar Man on Halloween gets a special dialogue choice. The same is true of the Arkham Knight sequel, which boasts a special jump scare from Manbat.

But Destiny went all out, building an entire series of quests, gear, and skin-like masks — and some Michael Jackson dance moves. Users who join in this week and next week get a special quest from Tess Everis and Eva Levante in the Tower. Eva will hand you an empty candy sack and a mask, and send you to knock on the doors of the other NPCs in the Tower, who will give you some candy. Once the sack is full, you return to Eva and she’ll give you some more prizes and new masks. 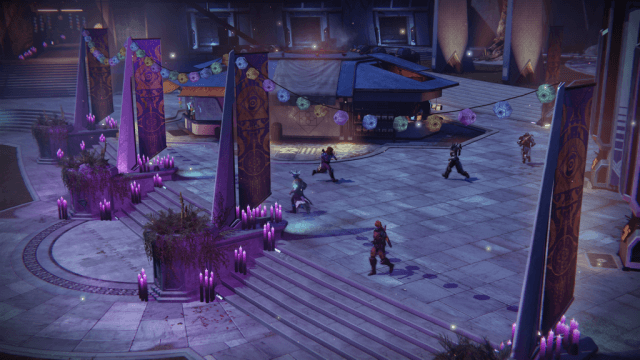 You collect candy for kills in PvP and PvE, and once the sack is filled, you return to trade in the candy for more masks. Wear certain masks during certain activities to complete new quests and you’ll unlock some rewards (more masks).

The masks, candy, and other perks mostly disappear at the end of the festival, which runs until November 9 — just like that real-life candy you’ll have sitting around. That’s a bummer; in a few hours of play I managed to collect about half a dozen masks, with everything from Oryx and Atheon to engrams and a tiger for the face. Some of them are quite entertaining to look at.

The downside to wearing the masks? They have no specs, no defense, no light level rating. So switching down to a mask from my helmet (when I was previously in the 290s) dropped me about 30 light levels. That’s important when you consider that some of the quest requirements are hard mode strikes and public events — hardly the places you want to handicap yourself.

But other items give you extra perks. Various pieces of candy let you collect extra glimmer from enemies. They can’t be stacked with normal items that grant the same benefits, but again, it’s not about creating a long-lasting benefit to the game. It’s about the developers having fun, and letting us join in. Case in point: One of the random drops from a candy sack is a box of raisins. The description: “What? Why…?”

Which brings us back to the masks. Yes, they’ll “fall apart” and leave your inventory at the end of the game period. The candles will be removed, as will the garlands of engram decorations. This update isn’t about sticking you with some cool weapon or helmet at the end, and it’s unlikely that those masks will suddenly turn into maxed out death helms that bring fear to the hearts of your enemies.

But push hard enough and you’ll receive “paper glue,” which lets you strengthen rare masks and make them legendary. Legendary masks stay after the deadline, so you get to keep them forever… like candy corn.