Disney Sequel ‘Enchanted 2′ to Bring Fans New Happily Ever After 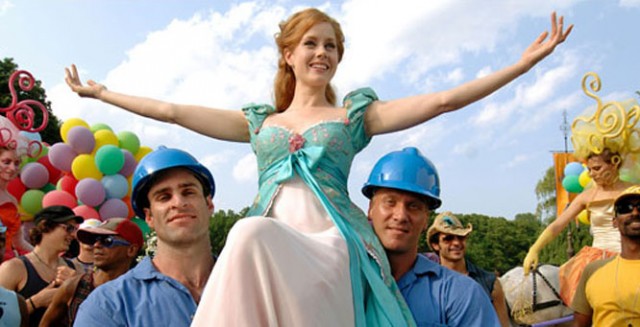 Good news for fans of Disney’s 2007 charming live-action fairytale flick Enchanted: A sequel is officially headed our way. Though rumors of a follow-up flick started circulating back in 2010, reports have just confirmed that the studio is now finally moving forward with Enchanted 2.

According to Deadline, Disney has already recruited two writers and a director to helm the movie. So who has been tasked with providing a second happily ever after? Writers J. David Stem and David N. Weiss, the brains behind Shrek 2 and The Smurfs, will be crafting a new script for the characters while Anne Fletcher, of The Guilt Trip, The Proposal, and 27 Dresses will be directing.

The first Enchanted movie follows Disney princess Giselle (played by Amy Adams), as she gets cast out of her animated land of Andalasia by an evil queen (Susan Sarandon) who’s jealous of her son Prince Edward’s (James Mardsen) affection for her. Giselle lands in New York City, where she meets single dad and engaged handsome divorce lawyer, Robert (Patrick Dempsey), who reluctantly agrees to help her navigate the real world. As the two develop a relationship, both of their views on romance and life begin to change.

The film, directed by Kevin Lima and scripted by Bill Kelly, received both an Oscar and a Golden Globe nomination and eventually pulled over $340 million worldwide at the box office. It also starred Timothy Spall, as the queen’s servant sent to New York to carry out her evil plans, and Idina Menzel, as the fiancé of Robert. There’s no word yet on whether any of the original cast members have also signed on to do the sequel or any details on the new plot, but there’s already theories circulating about the various ways Enchanted 2 could pick up where its predecessor left off.

Viewers of the first movie will remember that—spoiler alert!–Menzel’s character, Nancy, ends up running back to Andalasia with Prince Edward after Giselle and Robert fall in love with each other. Some fans hope that Enchanted 2 will dive deeper into their new relationship, possibly starting the film in the animated style of Andalasia (as Enchanted did) and then finding a way to bring them back to the real world. Meanwhile, Giselle and Robert would return as secondary characters.

Of course, this is only speculation at this stage. Still, the suggestion isn’t completely out of realm, particularly since Menzel has recently become even more of a household name, thanks to her part in another Disney hit Frozen. The success of Frozen and other sing-along fairytale films is likely a factor in Disney’s decision to finally green-light a sequel seven years after the first film.

The timetable for the project is still unclear at this point, but with the announcement of both writers and a director, it’s clear work on the film is picking up speed and heading in the right direction. While some fans are worried that a sub par sequel may mar the story of the first Enchanted, there is definite potential for this film to be a smash success at the box office and with critics, if done right.