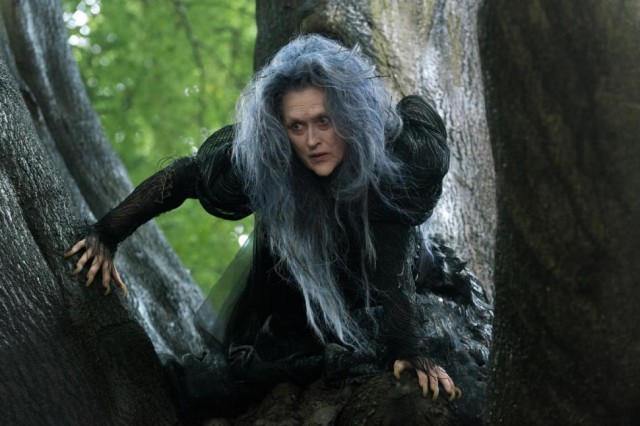 Fans have been eagerly awaiting the release of Disney’s upcoming Into the Woods movie ever since news of the stage-to-screen adaptation first broke. But they were less than pleased earlier this summer, when composer Stephen Sondheim implied that big changes had been made to the mature and sometimes dark script in order to make it more Disney-friendly. Now, director Rob Marshall (Chicago, Nine) is addressing the controversy and finally setting the record straight.

As fans know, the original 1987 Broadway musical skews toward a more adult audience, with plenty of sexual innuendos, tragically dark deaths, and graphic costumes. Given this, most seemed to expect some changes in the film. But Sondheim hinted at more than just a few deviations during a June interview with The New Yorker. The composer stirred up a public storm when he suggested that not only would several fan favorite songs be cut from the film, but also that significant plot changes would be made, particularly in relation to the characters of the Big Bad Wolf (Johnny Depp) and Rapunzel (Mackenzie Mauzy).

After sparking backlash, Sondheim issued a statement of clarification, claiming the quotes were “misreported” and describing the film as “genuinely collaborative and always productive.” But his explanation seemed to be too little, too late for some fans who remained convinced that Disney would strip the story of all of its more explicit parts. In a recent interview with Entertainment Weekly though, Marshall insisted that reports of the wide deviations between the film and the play are far from the truth.

“It’s ironic that happened at all, because Steve’s been part of every single step of this movie,” Marshall told EW of the controversy. “And the truth is, we’ve been incredibly faithful to the original.”

Marshall worked closely with both Sondheim and the musical’s librettist James Lapine to create the flick’s screenplay and assures fans that it won’t be as tame as they might think. “I’m actually really impressed Disney’s doing this film, because it’s very brave,” he said. “I don’t feel we’ve watered it down in any way, shape, or form. We’ve just made it a film. But I never thought in terms of ‘the Disney’ of it all, ever. None of us did.”

As predicted, some changes have been made. Per EW, the musical’s two-act structure has been altered with the second act getting slightly condensed and dispersed for a more traditional three-part storyline. Additionally, “Ever After,” the song that separated the two acts in the Broadway show, will be instrumental in the film. Though Sondheim reportedly wrote a new song for the Witch character (played by Meryl Streep), it will not be included in the film and neither will any new songs.

Still, Marshall promises that all of the big songs and scenes that fans were worrying about losing — like Rapunzel’s tragic demise, the lascivious Wolf, etc. — are still present in the movie. “All of those things are in the film. ‘Any Moment’ is in the film … Rapunzel’s end is still pretty dark, it’s just a different kind of dark, and it’s just as harrowing, and just as sad.”

These new details will likely come as a relief to the show’s longtime fans. Still, it doesn’t seem as if Disney has to worry about drawing in audience members, regardless of the changes made or not made to the film. The excitement surrounding the movie seems to be at an all time high, and with all the buzz generated by the trailer, it seems safe to say that people will buy tickets, even if only out of sheer curiosity. Whether the film will actually be able to live up to their high expectations is another question entirely. Into The Woods hits theaters on Christmas Day.