It was over 20 years ago when Princess Diana was in the fateful car accident that killed her. She was loved by the public, by the other royals, and most of all by her two sons, Prince William and Prince Harry. There’s definitely no replacing Diana, as she was truly one of a kind, and we know that William keeps her memories alive so his children, Prince George, Princess Charlotte, and now Prince Louis, can learn of her legacy for years to come.

Before Diana’s death, however, her ex-husband, Prince Charles, was in a relationship with Camilla Parker Bowles. And now that they’re married, we’re wondering how Camilla is taking the role of grandma. Here’s what we know.

Camilla loves being a grandmother

She may not have too many other step-grandchildren, but when it comes to taking care of a large family, Camilla understands how to be a loving and warm grandmother. Daily Mail Online reminds us aside from Kate and William’s kids, she has five other grandchildren, too. During her first marriage to Andrew Parker Bowles, she had two kids of her own — and between them, they’ve given her five grandkids total (two of whom are twins). And being a grandmother to all of these little ones is a true joy for Camilla.

Hello! reports Camilla said in a British documentary that she recommends being a grandmother to everyone. “It’s very nice because you haven’t got the full responsibility. You can give them a wonderful time, spoil them, give them all the things their parents won’t allow them to have and then give them back again,” she said. 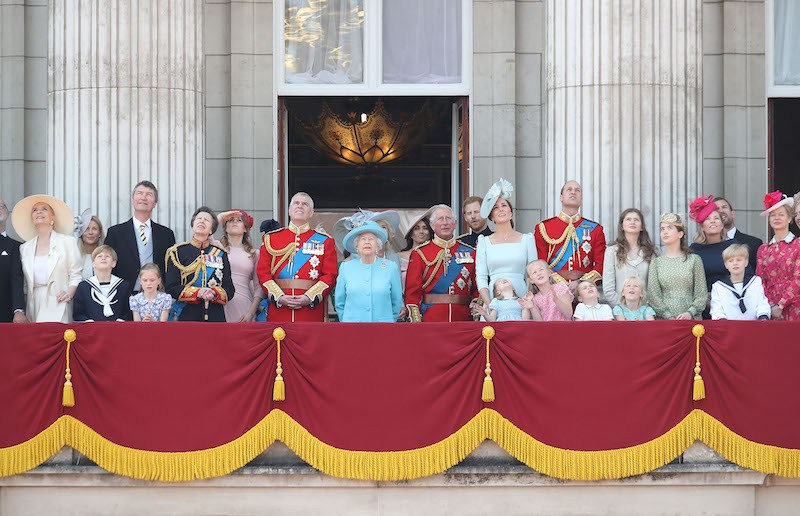 The royal family at Trooping the Colour | Chris Jackson/Getty Images

As mentioned before, Camilla loves to spoil kids rotten — and every June, she has the perfect way of celebrating her love for all of her grandkids and step-grandkids. Good Housekeeping notes she hosts a party just for them (and the grandchildren of friends are also invited).

As Penny Junor notes in her book, The Duchess: Camilla Parker Bowles and the Love Affair That Rocked the Crown, at Camilla’s 2016 party, there were around 90 children in attendance. And they were all “tucking into sandwiches, cakes, and jellies and roaring around the garden at Clarence House, having tugs of war and watching spellbound as magicians did tricks and entertainers made them laugh.” Certainly sounds magical to us.

Here’s what George and Charlotte call her

When George was born, Daily Mail Online spoke with Camilla about what her step-grandchildren would call her. And though it was undecided at the time, it seemed pretty clear that they would follow suit with the rest of her grandkids. She told the publication that her biological grandchildren called her “GaGa.” She then joked, “I don’t know if it’s because they think I am, but it is still very sweet.”

It isn’t too surprising that Camilla didn’t take on the traditional name of “grandma,” as that would have certainly been reserved for Diana. As for Prince Charles, he insists on the grandchildren calling him “grandpa” instead of “granddad.”