Who would have guessed that Donald Trump would ever talk about director David Lynch under any circumstances? But on Twitter and during a rally, the president declared on Monday that the acclaimed director loves him and thinks he’s one of the greatest presidents of all time. So did Lynch really say that, or is his quote being taken out of context?

The quote in question originally ran in The Guardian. Here’s what Lynch said about Trump:

“He could go down as one of the greatest presidents in history because he has disrupted the thing so much. No one is able to counter this guy in an intelligent way. Our so-called leaders can’t take the country forward, can’t get anything done. Like children, they are. Trump has shown all this.”

However, it’s worth noting that The Guardian breaks up this quote by writing in their own words, “While Trump may not be doing a good job himself, Lynch thinks, he is opening up a space where other outsiders might.”

So essentially, Lynch just seems to be saying that Trump could go down as being an important president in that he has exposed politicians everywhere as being incompetent. He didn’t really say that he thinks Trump is a great president because of his specific policies or actions in office. In fact, The Guardian’s paraphrasing of his words suggests he doesn’t think Trump is doing a good job.

Lynch is a Democrat, and he says he has always been one, although he does have one specific bone to pick with the party. He said in 2006:

I’m a Democrat now. And I’ve always been a Democrat, really. But I don’t like the Democrats a lot, either, because I’m a smoker, and I think a lot of the Democrats have come up with these rules for non-smoking. And I don’t think that that’s necessarily so bad, but they have to give the smokers a place.

Lynch had previously expressed some admiration for Ronald Reagan during the 1980s, although he later clarified that by saying:

Reagan cleared brush. That’s what I liked about him. My father grew up on a ranch in Montana, and I grew up in Western American thinking, sort of like cowboys in the past on my father’s side. So I liked him for that, and I liked this one speech he read early on, at some convention. But at that time, I thought of myself as a libertarian. I believed in next to zero government. And I still would lean toward no government and not so many rules, except for traffic lights and things like this.

During the 2012 election, Lynch supported Barack Obama, saying, “I do not trust Mitt Romney to look after the best interests of 99% of Americans. I think electing Mitt Romney would be a catastrophe for our country — one which would be real difficult to straighten out later.” 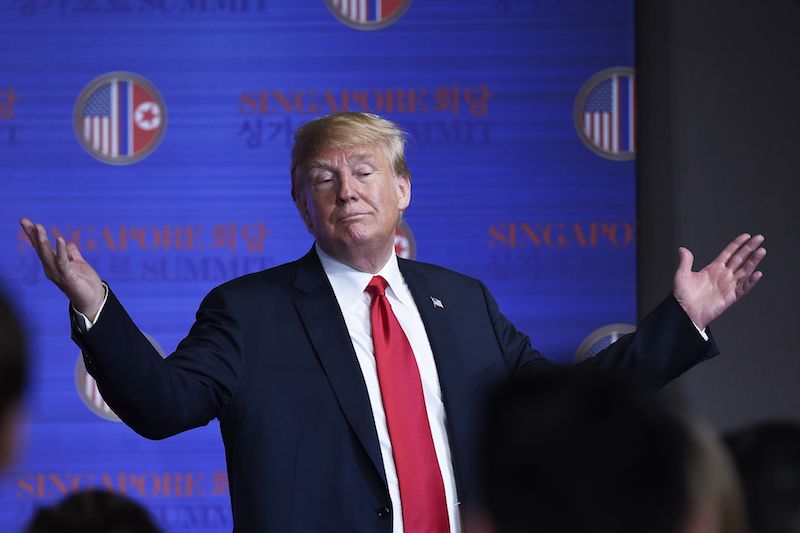 When it came to the 2016 election, Lynch did not vote for Donald Trump. He told The Guardian that he was originally a backer of Bernie Sanders, but in the general election, he ended up going for Gary Johnson. However, he clarified that he isn’t that immersed in the world of politics, explaining, “I am not really a political person, but I really like the freedom to do what you want to do.”

On Twitter, President Trump recently tweeted out a link to a Breitbart article titled “Director David Lynch: Trump Could Go Down as One of the Greatest Presidents.” He also read from this article at a rally on Monday night, calling Lynch a “great filmmaker” and suggesting that more people in Hollywood voted for him than we’ve heard about.

Trump also joked that Lynch wouldn’t work again after this. “Of course, there goes his career, right, in Hollywood,” Trump said.

Basically, then, Trump is indeed taking Lynch’s quote slightly out of context, although to be fair, he was just reading from an article that took Lynch’s quote out of context. What the director said was that Trump has disrupted the political establishment so much that he will go down in history as being very important. He didn’t actually say that Trump is a good president, and, in fact, The Guardian’s reporting suggests that Lynch thinks he is doing a poor job.

UPDATE: Lynch has now put up a post on his Facebook page making clear that he isn’t the president’s biggest fan. He wrote:

This is David Lynch writing. I saw that you re-tweeted the Breitbart article with the heading – Director David Lynch: Trump ‘Could Go Down as One of the Greatest Presidents in History.’ I wish you and I could sit down and have a talk. This quote which has traveled around was taken a bit out of context and would need some explaining.

Unfortunately, if you continue as you have been, you will not have a chance to go down in history as a great president. This would be very sad it seems for you – and for the country. You are causing suffering and division.

It’s not too late to turn the ship around. Point our ship toward a bright future for all. You can unite the country. Your soul will sing. Under great loving leadership, no one loses – everybody wins. It’s something I hope you think about and take to heart. All you need to do is treat all the people as you would like to be treated.