Apart from being the longest reigning monarch, it’s no secret that Queen Elizabeth II is also known for her longevity. At 92 years old, the queen is doing remarkably well for her age, and she still partakes in many royal duties on her own. When we take a look at her family history, it’s clear she has strong genes, too, as her mother passed away at 101 despite years of smoking. If there’s anything we can be sure of, it’s that Queen Elizabeth II still has many years as the U.K.’s leader.

When it comes to living a long and healthy life, diet and lifestyle habits certainly come into play, too. And it has many wondering if the queen indulges in any unhealthy habits that may threaten her lifespan. Here’s the truth regarding what she chooses to indulge in.

Does the queen have a sweet tooth?

Queen Elizabeth II and Prince Philip wave as they walk to the Elysee Palace in Paris on June 9, 1992. | Joel Robine/ AFP/ Getty Images

The queen reportedly has a varied diet — and yes, it does include sugary favorites. She doesn’t go crazy for all sweets, however. Instead, she lives a life of moderation and eats from a variety of food groups, most of which are quite healthy.

Reports claim she starts her day with Earl Grey tea and biscuits, or she’ll go for a continental breakfast that includes scrambled eggs and smoked salmon. For lunch and dinner, fish and fresh prepared vegetables are often on the menu. And it’s quite common to see the queen enjoying a bowl of salad or a fruit medley as well.

While many expect that she would be indulging in caviar or expensive cuts of meat, she keeps it light and simple, which certainly contributes to her health. And Darren McGrady, the royal family chef who cooked for the queen for 15 years, revealed that the queen also stays away from starchy foods unless she’s attending state dinners, Express notes. That doesn’t mean she strays from dessert, however — and there’s one sweet and chocolatey dish she reportedly can’t get enough of.

Her favorite dessert is chocolatey and decadent 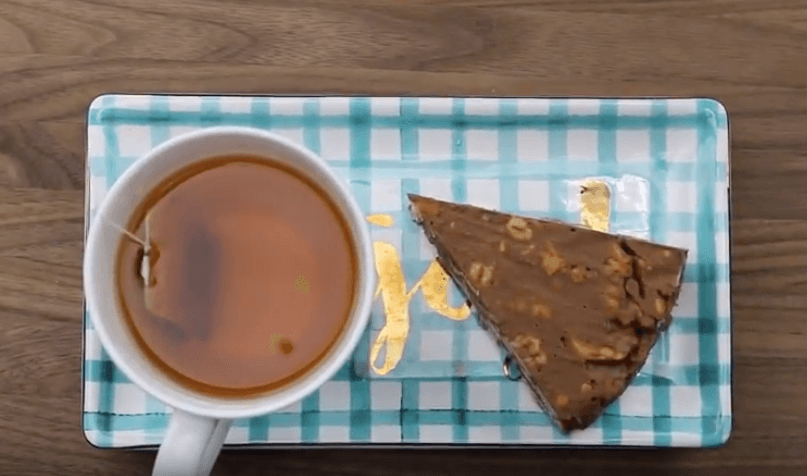 When it comes time for dessert, the queen goes for chocolate. And McGrady revealed it’s homemade chocolate biscuit cake that’s her all-time favorite, Express notes. McGrady said the cake will even travel with the queen, as he noted, “Now the Chocolate Biscuit Cake is the only cake that goes back again and again and again every day until it’s all gone. She’ll take a small slice every day until eventually there is only one tiny piece ….” And she’s not the only royal who loves this cake, either. Princess Diana, Prince Harry, and Prince William also allegedly can’t get enough of it.

So, what’s in this decadent cake? Today reveals the cake contains tea biscuits or sweet cookies, giving it a crunchy texture. It’s also made with dark chocolate and dark chocolate icing. In essence, it’s a chocolate lover’s dream.

She has other indulgences, too

This chocolate biscuit cake is definitely one of the queen’s favorites, but it’s not the only indulgence she partakes in. The queen also loves cocktails — but she doesn’t drink as much as some have reported in the past. As for her favorite, she loves a gin and Dubonnet, according to McGrady, which is a wine-based drink served over ice with lemon. It was also a favorite of the queen’s mother as well.

When she opts for a different drink, McGrady notes she also likes wine, a dry martini, or champagne, too. And we can’t forget that the queen even has her own brand of wine, though it can be tough to get your hands on since it’s repeatedly sold out in the past.

The one unhealthy habit she never touched

While too much chocolate cake and cocktails can lead to health issues down the line, the queen knows how to stay balanced. And another reason she’s in such good health is because she never partook in smoking. While her sister, Princess Margaret, reportedly smoked up to 60 cigarettes a day (and her mother and father were both reportedly heavy smokers as well), Queen Elizabeth II never had an interest in the habit. Many of the queen’s relatives — including her sister — died of smoking-related diseases, too.