Before Meghan Markle entered the royal family, sweeping every one of their feet, Kate Middleton was the darling among the royals. The mother of three has been at Prince William’s side for well over a decade, and she has mastered the art of being a duchess and interacting with the British Royal Family’s very regal matriarch Queen Elizabeth II. From her firm hold on her family to the various rules and regulations that she imposes, it’s clear that the queen is revered by the Windsors, even though she’s a tough cookie to crack.

The queen has gotten to know Duchess Kate Middleton over the past several years, but her relationship with Duchess Meghan Markle is still very new. So which one of these women, who both come from “common” backgrounds does the queen like better? 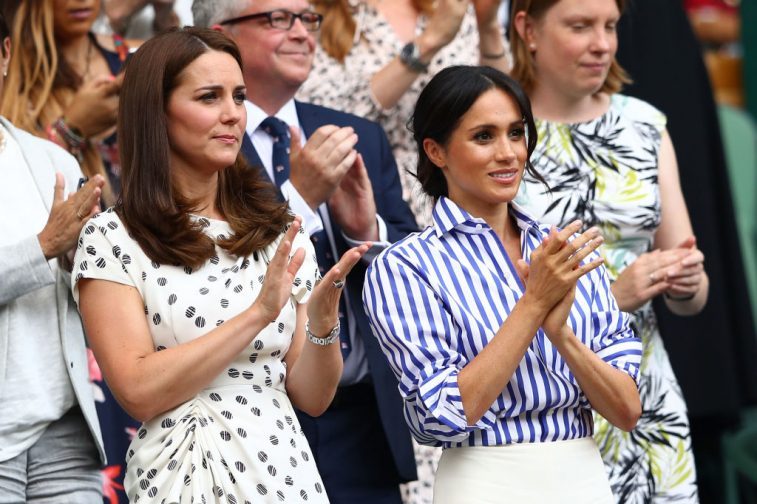 Trying to get the hang of things

Markle is still a very green royal, and she’s still trying to get into the swing of things. While Duchess Kate Middleton has had time to form a real friendship with the queen, Markle still sees her more of a matriarch figure or as Prince Harry calls her, granny. Author and behavior expert Judi James explained to The Sun, “[The queen’s] clearly fond of both, but she’s more at ease with Kate, and I think she must enjoy her royal duties when Kate is with her. But the Queen still has a parent-child relationship with Meghan so they’ve got a long way to go before they’re friends. Kate and Meghan use perfect, regal-looking smiles and almost zero underlying ‘tells’ to suggest their real feelings or to create any kind of soap opera interest.”

However, there is one difference between Markle and Middleton’s relationship with the queen. Middleton wasn’t allowed to partake in any official royal duties until after, her marriage to Prince William in 2011. Markle, on the other hand, has been able to attend engagements for the queen from almost the beginning of her relationship with Prince Harry. This might be because the former actress was already used to being in the limelight.

Still, we do think the queen wishes that Markle and Prince Harry would tune down their excessive PDA.

One thing is for sure, the queen respects her granddaughters-in-law. Duchess Kate Middleton dealt with a whirlwind when she began dating and eventually married Prince William. Being the wife of the future King of England is no small task, and the queen has always wanted to make sure that the duchess and the Middleton family feel as welcome as possible. (She did not extend this kindness to Princess Diana and the Spencers and it was a disaster.) She allows Prince William, Middleton, and their children to spend Christmas was the duchess’ side of the family which is pretty much unheard of.

She’s also extended that same kindness to Markle, whose mother, Doria Ragland has moved from Los Angeles to England to be by her daughter’s side. Though the royal family isn’t supposed to be vocal about their political beliefs, Markle has always stood up for impoverished people and women in particular, and the queen has not asked her to tone down her rhetoric.

Mostly, it looks like Queen Elizabeth is happy that her grandchildren are happy.