Donald Glover’s ‘This Is America’: All the Secret References You Probably Missed

Donald Glover has picked up the baton that Kanye West dropped years ago. During his performance as his musical alter ego Childish Gambino on Saturday Night Live, Glover debuted a stunning new single, “This Is America.” The searing visuals for the new single dropped shortly after that, and the social commentary that is rippling through the entire music video has everyone shook.

The visuals for “This Is America” are full of poignant commentary on racism, guns, police brutality, social media, and everything in between. Still, with so much happening in Childish Gambino’s incredible work, we are certain there are more than a few secret references that you probably missed. 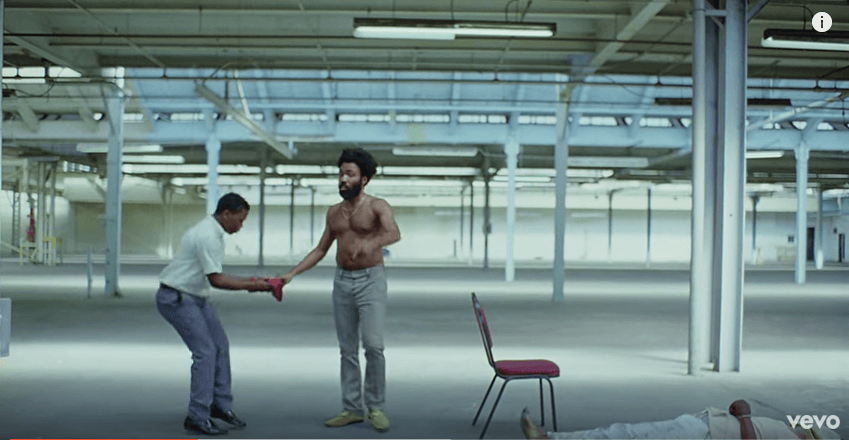 For the past two decades in America, we’ve had to contend with shooting atrocities like Columbine, Parkland, Sandy Hook, and so many others. And yet, there has been little to no change when it comes to gun reform. Instead, the National Rifle Association clings to the Second Amendment as more and more mentally ill people and terrorists access guns.

Gambino was quick to comment that guns are more valued today in America than human life. In “This Is America,” Gambino shoots a nameless, faceless person in the back of the head. He then carefully lays the gun on a plush red cloth. The dead body, in contrast, is dragged off screen.

Next: A horrendous shooting 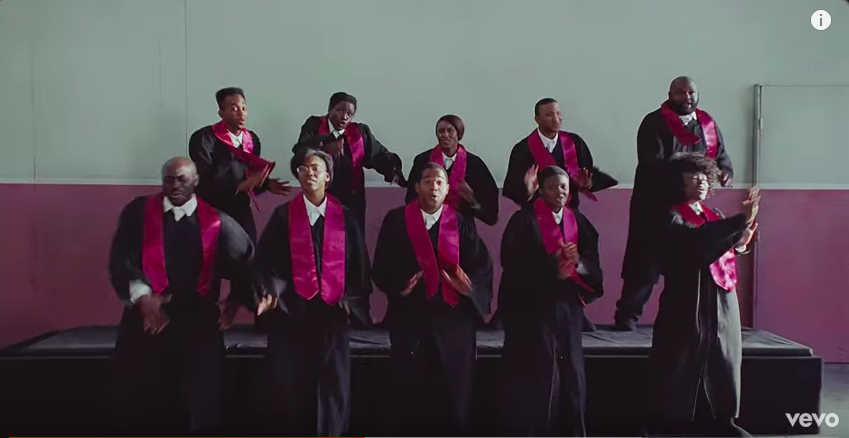 This was one of the most poignant scenes in the video. | Donald Glover via YouTube

In “This Is America,” we get a close up of 10 jovial Black choir members singing, dancing and worshiping until Gambino brutally guns them down with a semi-automatic weapon. He then glides away, unbothered and unaffected by the incident.

Next: Dancing around the real issues 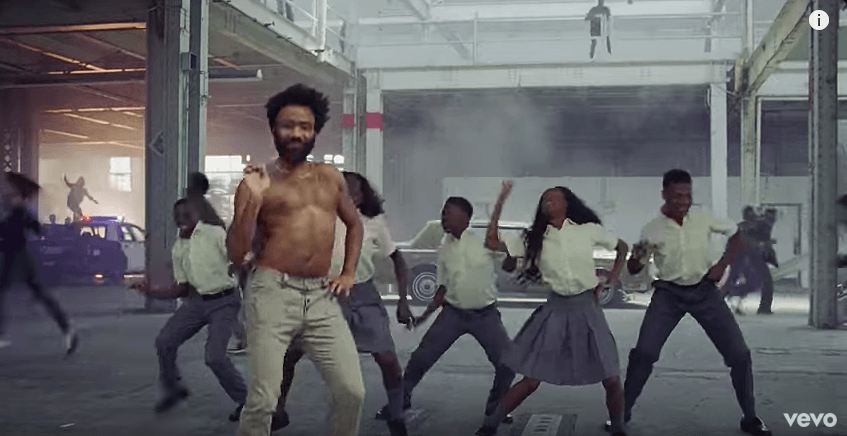 The dancing is significant in itself. | Donald Glover via YouTube

The most visible images in “This Is America” is the dancing. As Gambino and the kids dance, there is absolute chaos happening in the background. And yet, the group continue to bend and snap imitating everything from our most beloved viral classics to South African Gwara Gwara.

As Forbes suggests, “To some, these moments of joy, drawn from the latest viral dances or videos, provide a brief, enjoyable respite. To others, they might be a way to gain a quick buck or a few followers.”

There is also the argument that the country is literally dancing around issues of police brutality and racial injustice.

Next: Death by police hands

Death on a white horse 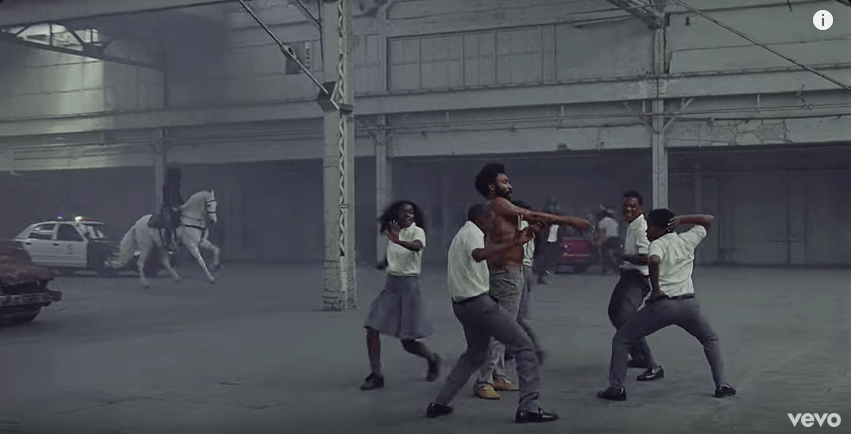 Did you catch this horse and police car in the background? | Donald Glover via YouTube

One of the most astonishing images in “This Is America” is one that many of us probably missed during our first viewing. As Gambino and the children dance with glee, a hooded figure cloaked in black which represents death rides on a white horse. A police car follows closely behind it representing Hell.

Both images go unnoticed because of the distraction of the dancing.

Next: The power and destruction of cell phones. 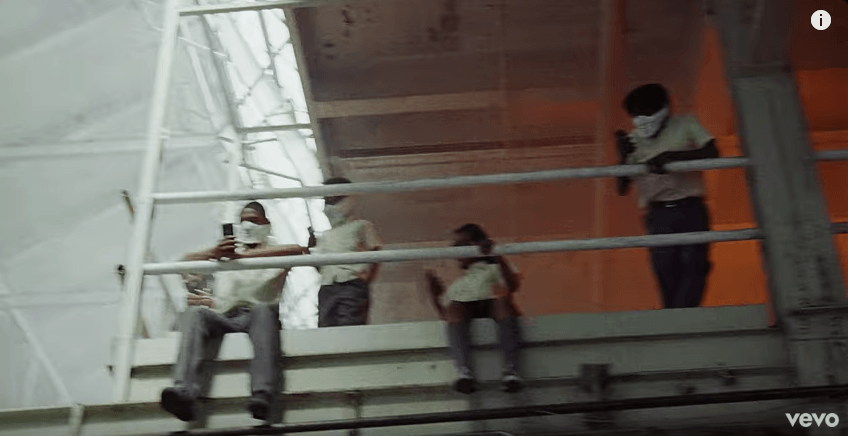 The kids with the cell phones are an important part of this video. | Donald Glover via YouTube

It seems that social media has been our best and worst asset. While viral videos and social media platforms can literally suck us in, they’ve also provided us with the ability to broadcast instances of violence, police brutality and so forth.

In “This Is America” children hang out on the balcony with their faces covered and their cell phones out, recording everything they see below them.

Gambino raps,  “This a celly / That’s a tool.” The lyrics seem to reference the 2018 shooting death of Stephon Clark who was clutching his cell phone when he was shot to death in his backyard. 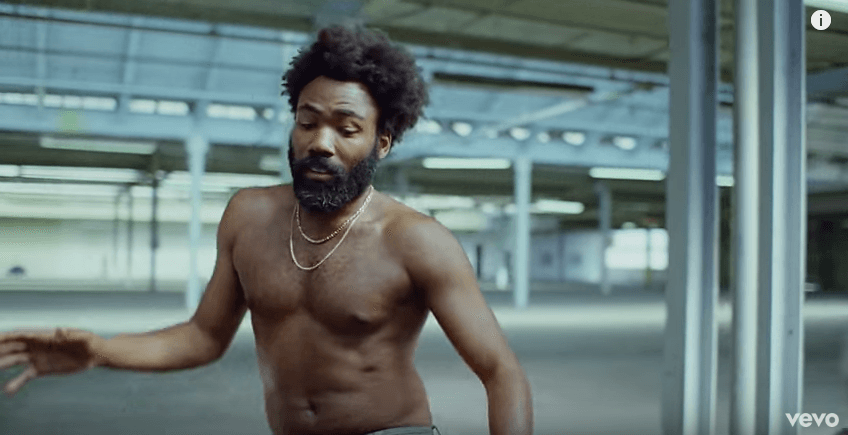 There are hidden references within the first few seconds of the video. | Donald Glover via YouTube

In the first minute of the video, Gambino’s stance is reminiscent of a Jim Crow caricature. This type of anti-black imagery was prevalent during the 19th and 20th centuries and depicted lazy, self-hating Black people who were angry, violent and animalistic.

Unfortunately, even in the 21st century, many folks still see Black people this way.

All of those old cars 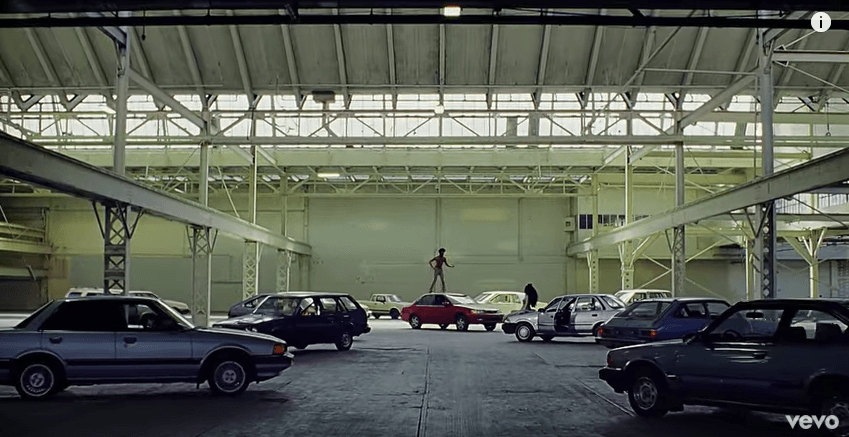 Yes, there’s even symbolism in the old cars. | Donald Glover via YouTube

There are a ton of old vehicles in “This Is America.” The cars are models from the ’80s and ’90s. Not only do they symbolize the fact that police brutality isn’t a new issue, but it also directly relates to the 2016 shooting death of Black motorist Philando Castile, who was slaughtered by a police officer as he sat in his 1997 Oldsmobile.

Next: Hints at a future collaboration 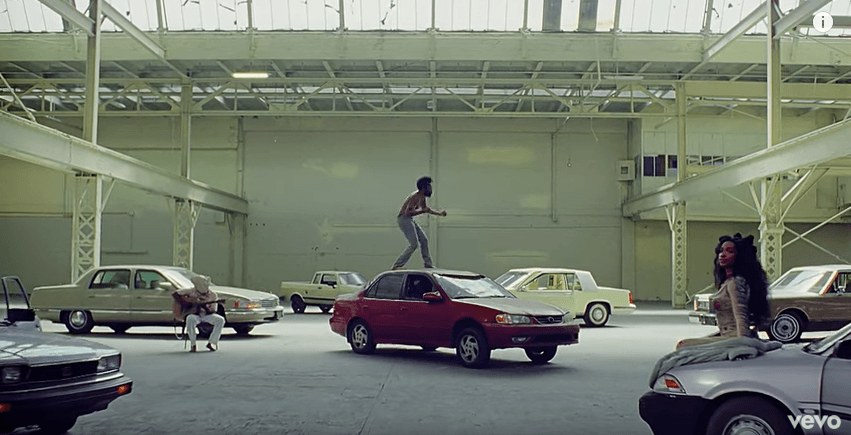 Do you recognize the woman on the right? | Donald Glover via YouTube

There is so much happening in “This Is America,” that many of us probably missed, Grammy-nominated artist SZA’s cameo appearance. Though she doesn’t sing or speak, the CTRL songstress sits in a chair in front of the old cars. Most fans think Gambino is hinting at a forthcoming collaboration. 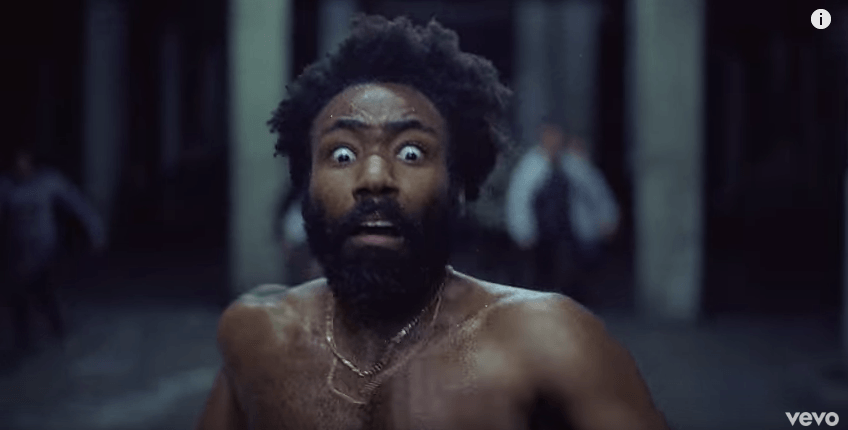 The running at the end of the video is also something to watch. | Donald Glover via YouTube

In Jordan Peele’s Get Out, the Academy Award-winning director introduced the idea of The Sunken Place. Using Childish Gambino’s “Redbone” in the film, Daniel Kaluuya’s character Chris is trying desperately to escape The Sunken Place. It’s a place where people of color are aware of the horror, and violence that surrounds them, but are powerless to stop it.

It should be noted that Kaluuya introduced Gambino’s performance of “This Is America” on SNL. At the end of the video, Gambino can be seen sprinting away from something that could very well be The Sunken Place.

Next: Summing it all up 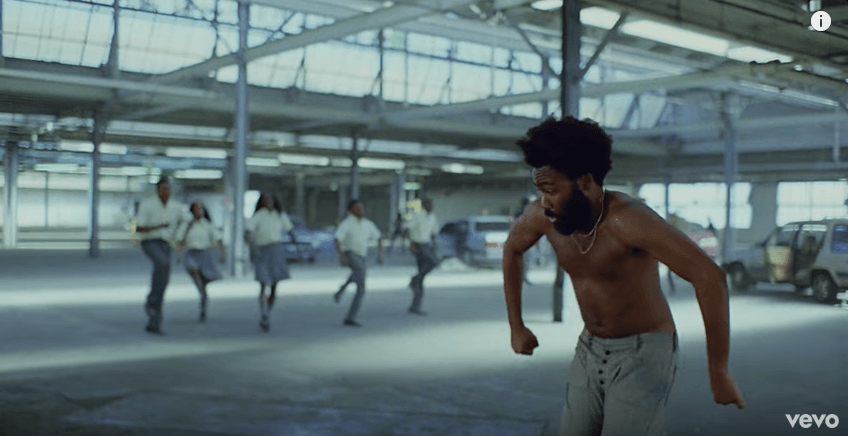 Make sure to watch this video twice at least. | Donald Glover via YouTube

To sum it all up, “This Is America” is a commentary on American citizens. From the moment the video begins, there is a ton happening. Since most people will get distracted by Gambino’s dancing along with the school children, they’ll miss all of the insanity that is happening in the background.

One Twitter user said it best, “#ThisIsAmerica video interpretation: some people love black culture when it comes to dope beats, dance crazes, and style. But when deeper issues come up: racism, violence towards blacks, appropriation, etc…they look the other way.”