President Donald Trump may be addicted to television. This makes sense, as Trump has television to thank for launching his political career, and reality TV helped make him a household name. But the degree to which Trump remains tapped into the world of TV even now as president is downright shocking.

In fact, according to a new report, Trump definitely spends way more time watching television every day than most average people do. Here’s a look at Trump’s surprising TV habits, including the exact number of hours a day he spends glued to cable news (No. 4!).

It shouldn’t be much of a surprise that Trump watches a lot of television. During the 2016 election, Trump was known to tweet about a story shortly after seeing it discussed on cable news. After he took the oath of office, this never stopped.

In just one example of many, in January 2017, Fox News reported on Chelsea Manning criticizing President Obama, with “Ungrateful Traitor” being written across the chyron. Less than 15 minutes later, Trump tweeted about this story using the exact same phrase that Fox had used.

In another instance, he tweeted about Senator Richard Blumenthal at the exact moment that Blumenthal was being interviewed on CNN.

Not only does Trump tweet in response to stories, but he also tweets about television in general quite a bit. In particular, he’s still obsessed with ratings.

Ratings are often on his mind. | Donald Trump via Twitter

Trump’s fascination with TV apparently influences key decisions. The Washington Post once reported that Trump said he wouldn’t fire Sean Spicer because he “gets great ratings.” Trump also said during the campaign that he gets his military advice from watching “the shows.”

2. He starts his day by immediately turning on the TV

He’s up bright and early with the remote control in hand. | Mandel Ngan/AFP/Getty Images

A new report by The New York Times details Trump’s television habits. It mentions that he wakes up at 5:30 a.m. every morning and immediately begins watching television. We already know that Trump watches Fox & Friends in the morning, as he’s always tweeting about that show. But according to this Times article, he also watches CNN and MSNBC’s Morning Joe, despite constantly complaining about them.

This idea that Trump starts his day by watching TV and continues watching throughout the day was also mentioned in a previous report by The Washington Post.

3. He doesn’t let anyone else touch the remote

The New York Times also reported that Trump doesn’t let anyone else touch the remote other than technical support staff. The report goes on to say that during meetings, Trump is usually keeping his eye on the news chyrons displayed on the 60-inch televisions. When he misses a show live, he watches later using what he calls his “Super TiVo.”

A previous profile of Trump published by TIME notes that Trump watches TV “like a coach going over game tape.” Trump spoke to the TIME journalist while fast-forwarding through TiVo, telling the journalist that TiVo is “one of the great inventions of all time.”

And a New York Times Magazine profile of Trump recalls a similar experience, with the reporter saying they joined Trump as he was sitting alone at 12:30 p.m. watching a recording of Fox & Friends.

4. He watches between four and eight hours of TV per day

How does he have time for anything else? | Joe Raedle/Getty Images

The most shocking piece of information mentioned in this New York Times article is that Trump watches anywhere from four to eight hours of television per day.

“People close to him estimate that Mr. Trump spends at least four hours a day, and sometimes as much as twice that, in front of a television, sometimes with the volume muted, marinating in the no-holds-barred wars of cable news and eager to fire back,” The New York Times reported.

This figure fits with a previous report from The Washington Post that Trump watches about five hours of TV per day. To be fair to Trump, a lot of people watch that much TV.

According to a 2016 Neilsen study, people over the age of 50 watch around 50 hours of TV per week, or a little over seven hours per day. But the average person is not the president of the United States and does not have the responsibilities that Trump has, so that figure is pretty surprising.

He made his opinions on the reports very clear. | Donald Trump via Twitter

After this New York Times report came out, Trump took to Twitter to dispute it. He denied watching this much television and also said that he doesn’t watch CNN or MSNBC. But The New York Times stands by its reporting.

In addition, The Daily Caller, a conservative news website, released a report backing up at least part of The New York Times’ story. They reported, “Two sources close to the president, speaking on the condition of anonymity, told The Daily Caller that Trump has a heavy television habit and frequently complains about cable news hosts.”

In addition, there have been dozens of reports, including one from The Washington Post that Trump watches more than his fair share of TV and is even known to interrupt meetings to watch it.

6. Trump likely tweeted his response after learning of the report on TV 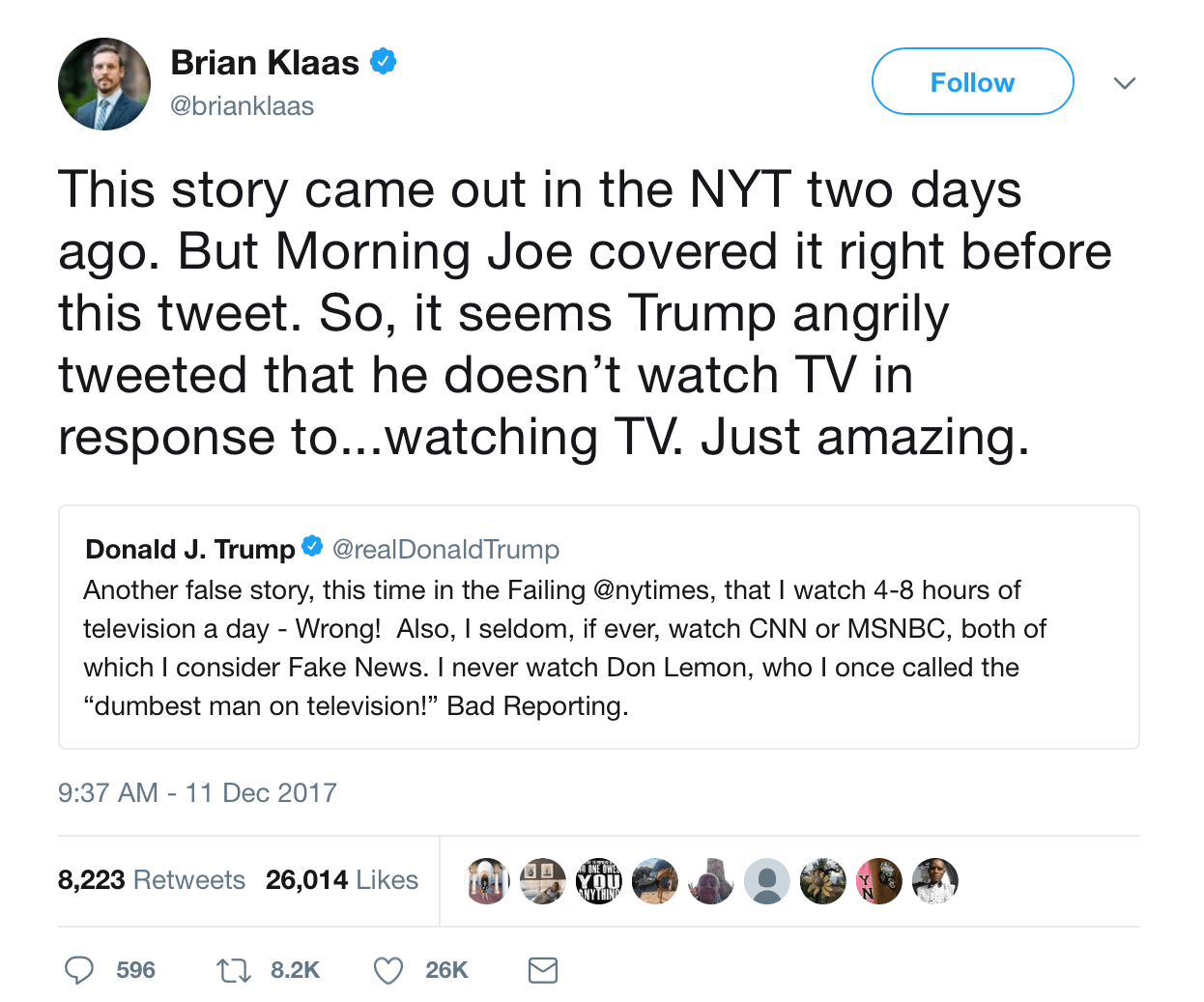 In an ironic turn of events, Brian Klaas pointed out that Trump likely tweeted about TV in response to watching TV. | Brian Klaas via Twitter

It doesn’t seem like a coincidence that Trump tweeted his response to the New York Times story right after it was reported on by cable news. As pointed out by Brian Klaas‏ on Twitter, MSNBC’s Morning Joe covered the story of Trump’s TV habits not long before Trump’s angry tweet.

This likely means that Trump was actually watching while MSNBC reported on his TV habits, ironically spurring his tweet about how he never watches TV and definitely doesn’t watch MSNBC.

Trump could have easily refused this story on Saturday when it was first published in the Times. But he waited until Monday, during the morning news cycle. So needless to say, this tweet does not help prove that he rarely watches television.

7. He keeps tweeting about TV, despite claims he has no time to watch it

Even without all of these reports, it’s pretty clear that Trump watches a lot of TV, if only because of how much he tweets about it. And let’s not forget about the multiple interviews in which journalists have personally witnessed Trump being distracted by television while talking to them. In fact, in the very first footage ever broadcast of Trump aboard Air Force One, a television was blasting in the background.

Yet Trump continues to claim that he never watches TV, both in the recent tweet above and in the past. In November 2017, Trump even went out of his way to tell reporters that he doesn’t watch television.

He also tweeted in July that he does not have time for television, something that, it’s increasingly clear, is definitely not the case.