Donald Trump Tweets That Suggest He May Be Two Different People 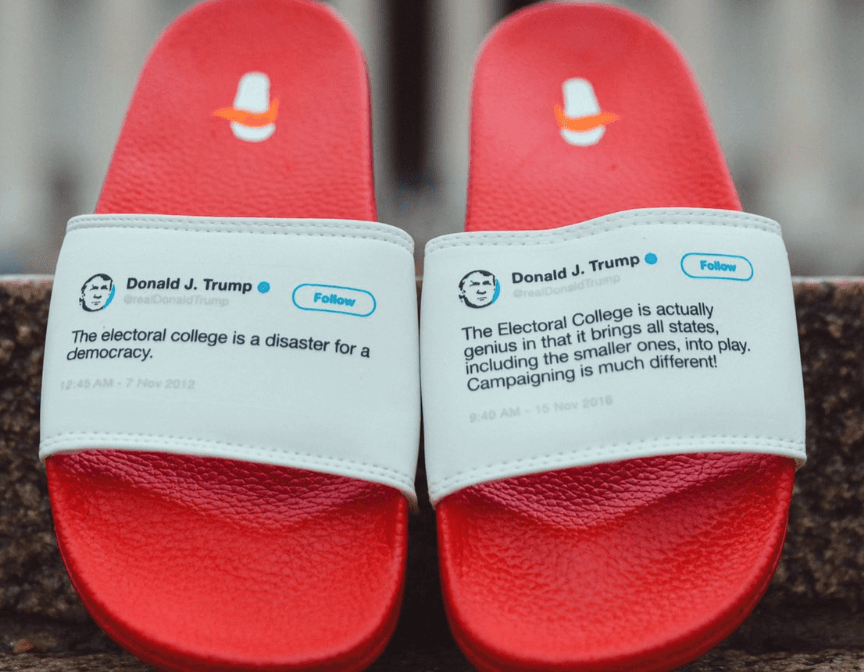 It goes without saying that many people are not a fan of President Donald Trump. The current commander-in-chief has alienated many through his controversial opinions, but there’s one thing he does that especially drives people crazy: He contradicts himself — a lot.

Trump’s tweets are a constant source of entertainment for those who are opposed to him, where it becomes perfectly clear how often his opinions change. Here are some of the tweets, on the most popular issues, in which Trump flip-flopped.

Not even the NFL is safe from Trump’s flip flopping | PresidentFlipFlops.com via Twitter

Just a few years ago, Trump was criticizing Obama spending valuable time weighing in on the NFL. Flash forward to 2017, and Trump is doing the same thing. We all need some distractions in life, but it’s hard to ignore this flip flop.

Next: A delicate issue that Trump hasn’t handled well on several occasions.

The media is so after me on women Wow, this is a tough business. Nobody has more respect for women than Donald Trump!

While @BetteMidler is an extremely unattractive woman, I refuse to say that because I always insist on being politically correct.

It appears Trump believes he’s an advocate for women. Of course, many have called him out on that —  including the multitudes of women who have alleged that he sexually assaulted them.

There’s no shortage of evidence of Trump’s misogynistic attitude online. He has bashed numerous women, usually based on their appearance, while also getting angry when Hillary Clinton and many others made note of his sexist behavior.

Next: His relationship with the press has always been shaky.

An 'extremely credible source' has called my office and told me that @BarackObama's birth certificate is a fraud.

Anytime you see a story about me or my campaign saying "sources said," DO NOT believe it. There are no sources, they are just made up lies!

Trump’s relationship with the press has always been shaky, even before he ran for president. Back when he was busy bashing Obama in 2012, he never released any sources for his claims that the then-president was not born in the U.S.

Fast-forward to today, and Trump frequently calls out the media for what he believes is “fake news.” He is quick to discredit anyone who critiques him in any way that he can, including, ironically, pushing back when there are no sources.

Next: Is China a friend or foe?

The concept of global warming was created by and for the Chinese in order to make U.S. manufacturing non-competitive.

In the coming months and years ahead I look forward to building an even STRONGER relationship between the United States and China. pic.twitter.com/mK3SB7t3EV

International relations present challenges for every administration, but Trump has really upped the ante. His proclivity toward saying one thing and doing another has made some world leaders very upset, while others seem happy to mend fences.

Relationships with leaders in a few different Asian countries are especially strained. Though Trump has happily bashed China in the past (apparently blaming them for creating the concept of global warming), he just met with and heaped praise upon the country’s current leader, Xi Jinping.

Next: We can all agree that something should be done about healthcare in America.

Republicans should just REPEAL failing ObamaCare now & work on a new Healthcare Plan that will start from a clean slate. Dems will join in!

As I have always said, let ObamaCare fail and then come together and do a great healthcare plan. Stay tuned!

One of the most divisive issues of the 2016 election surrounded healthcare, specifically Obama’s Affordable Care Act. Trump ran on a platform that included repealing this act, and has done everything in his power to keep that promise since taking office.

While the ACA was a step toward healthcare for everyone in the U.S., Trump’s stance against it goes against previous statements he made supporting universal healthcare initiatives. In fact, Trump has even flip-flopped on this subject within the span of a day.

Next: Trump’s views on abortion actually date back to 1999.

The irony is that the Freedom Caucus, which is very pro-life and against Planned Parenthood, allows P.P. to continue if they stop this plan!

It’s clearly not about the political party when it comes to Trump. He has gone back and forth on many issues, including abortion.

Pre-dating Twitter, Trump flip-flopped on this topic many times, saying in 1999 that he was “very pro-choice,” though adding “I hate the concept of abortion.” His statements in recent years have painted a much less tolerant view, with the president taking aim at Planned Parenthood specifically.

Next: We’ll never see those tax return documents, will we?

.@BarackObama wants to see 10 yrs of @MittRomney's tax returns–tell him "ok–but we want to see your college applications first.'

I did what was an almost an impossible thing to do for a Republican-easily won the Electoral College! Now Tax Returns are brought up again?

Given the way he tweeted about Obama, Trump is clearly an advocate for transparency — that is, when it comes to others.

While he pushed for Obama to release his birth certificate while he was in office, the parallel discussion surrounding Trump’s tax returns comes to a screeching halt. The president has made excuse after excuse for why he won’t release them, but he’s always quick to point out where other politicians have failed to cooperate in the same fashion.

Next: What exactly is going on with that wall, and who is really paying for it?

The WALL, which is already under construction in the form of new renovation of old and existing fences and walls, will continue to be built.

There were many repeated sound bites during the 2016 presidential race, but few were quite as prevalent as “the wall.” Trump’s plan to build a wall between the U.S. and Mexico in order to keep illegal immigrants out was a major part of his platform.

The arguments about the wall are numerous. Trump has maintained that Mexico will pay for the wall, that construction has (or has not) begun, and that there is, in fact, a literal wall (some have said that it’s metaphorical). At this point, it just sounds like Trump is talking in circles.

Next: Trump has a surprising stance on guns and hunting.

Politicians are trying to chip away at the 2nd Amendment. I won’t let them take away our guns! #Trump2016
Watch: https://t.co/zl4sMjmOUc

I'm not a hunter and don't approve of killing animals. I strongly disagree with my sons who are hunters, but (cont) http://t.co/eE5G0Eo8

Second Amendment rights are a major topic of discussion as gun violence in the U.S. continues to wreak havoc on the nation. In true Trump fashion, he has taken opposing sides at different times in history when it comes to his stance on guns.

On one hand, Trump wants you to believe that he is just like any other gun-toting conservative. But on the other hand, he seems to fully disagree with the entire practice of hunting, which is the reason why many gun owners fight for their rights in the first place.

Next: Trump calls himself ‘”too perfect” and claims to “have no faults.”

@Helena_Torry I consider myself too perfect and have no faults.

Trump has a tendency to find a way to work himself into every statement that he makes. And yet, he’s even been known to contradict himself when it comes to, well, himself.