Is ‘Doom’ Worth Buying for the Campaign?

Multiplayer is a major component of Doom, and during the Beta, we enjoyed it well enough. But not everyone is into online multiplayer. Since Doom also comes with a full single-player campaign, it’s worth a look in its own right now that the game is out in the wild. So, is Doom worth buying just for the campaign?

Yes, Doom is worth buying

The short answer is yes. Right from the start, this game hands you a gun and puts demons in the crosshairs. Even if you don’t touch the multiplayer mode, this game is worth buying. That is assuming you’re cool with gory ultra-violence and demonic imagery. It is Doom, after all.

In case you’re not familiar with the source material, the 1993 game Doom was one of the earliest first-person shooters ever made. It’s about a space marine fighting demons on Mars, and it gleefully offers up buckets of blood, gore, skulls, pentagrams, and all kinds of delightfully awful stuff. It’s also a very pixelated game without a jump button that makes you lose your weapons when you die.

Fast forward to 2016, and the new Doom is pretty much the exact same thing, but with much better graphics and a heap of tweaks that improve the experience, from frequent checkpoints to upgrades galore. Don’t worry, the gore is very much intact, and it looks even more gruesome (in a good way!) in HD.

True to the series, your character moves with the speed of an Olympic sprinter, much faster than other shooters. Once you get on board with the crazed pace of this game, I suspect the next shooter you play will feel sluggish in comparison. You don’t even have to reload your weapons; you just keep firing until you run out of bullets.

Running out of bullets means switching to another weapon, which is no problem here, because all of the weapons are a pleasure to use, from the explosive shotgun to the futuristic plasma rifle. Each weapon can be upgraded with a secondary firing mechanism, which can be further upgraded to make it more powerful or have its cool-down period reduced. The game has so many upgrade paths that it could easily be confusing if they weren’t presented in such an easy-to-digest way. Also of note, each upgrade makes a noticeable difference.

The game’s story is thin, playing out mostly during voice-over dialog. This isn’t a problem, because Doom isn’t about narrative. It’s about shredding through the minions of hell on a hostile planet. It’s about amassing a collection of powerful weapons and using them with joy as you dance around the game’s wonderfully chaotic battles. 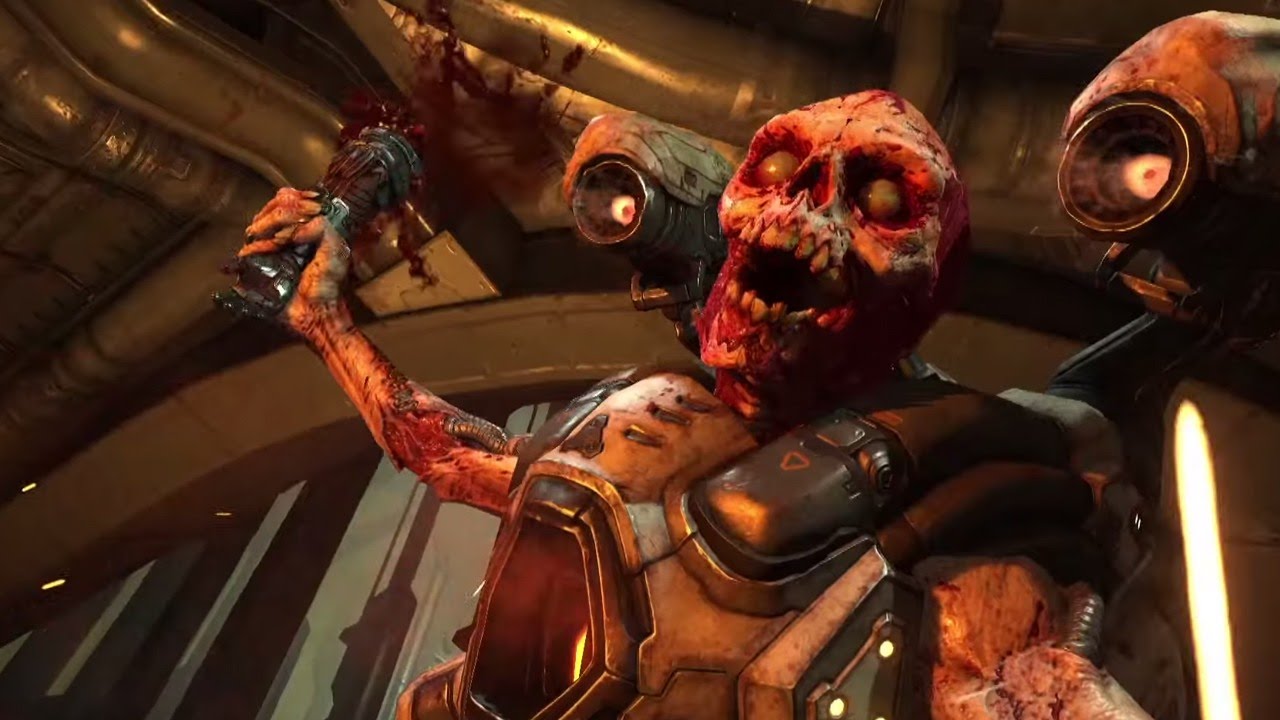 A demon threatens the viewer with the severed hand of its last victim. | Source: Bethesda

Weapons aren’t the only things you use in combat. You also use your hands, thanks to a gleefully violent addition called Glory Kills. Glory Kills are brutal, stylish finishing animations you can unleash on enemies once you’ve whittled down their health. Generally they have you tearing demons limb from limb, or crushing their skulls, or forcefully removing their jawbones.

In a lesser game these would be empty flourishes, but in Doom they serve an important function. This game is tough, so you’ll often find yourself low on health. The only way to replenish your health is to pick up health packs. Performing a Glory Kill guarantees a health pack drop, which means Glory Kills are incredibly useful during tense battles against hordes of demons. They also make the game look even more viciously appealing.

Also appealing are the complex levels and puzzle–like construction. Accessing new areas often requires color–coded key cards and, on occasion, handprints attained by ripping the arms off of dead soldiers. Secrets abound in these stages. Each one contains a collectible toy, a classic Doom map, trial rooms that reward you with upgrades, as well as new weapons and plenty of demons to turn inside-out. For a shooter, Doom’s campaign is about as re-playable as they come.

Clearly, I’m a fan of the new Doom. I haven’t enjoyed a shooter this much in a long time. It takes everything that made the original game great and melds it brilliantly with the conveniences of modern games. This is exactly what Doom should be in 2016.