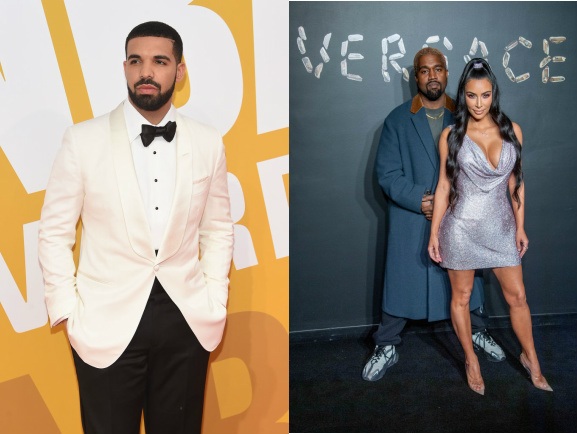 The tension between Drake and Kanye West continues to grow.

With the ongoing Twitter feud surround these two rappers, Drake has decided to everything he can to stand clear of Kanye West. Even if that means unfollowing Kim Kardashian on Instagram.

For anyone who doesn’t know what has been going on between the two rappers, let us enlighten you!

This feud dates back to September when Drake released his hit song “In My Feelings”. In the song, the rapper talks about a girl named “KiKi” who many fans believed to be Kim Kardashian.

Around that same time, Kanye West shut down rumors that he told Pusha T about Drake’s son. Pusha T made a diss track spilling Drake’s secret that he had a son.

Drake actually confided in Kanye West for parenting advice when he found out he was expecting a son. Soon, news of the baby was circulating through media outlets, creating tension between the two.

Many thought the two rappers would move on from this apparent beef, but Kanye West stirred the pot, even more, when he went a Twitter rant claiming Drake threatened him and didn’t have any sympathy for mental health.

Since this whole debacle, Drake and Kanye West have not been on good terms. Just recently, West demanded a public apology from Drake after finding out the “Nice For What” rapper follows his wife on Instagram.

West posted the tweet on New Year’s Eve and was recently deleted. The rapper wrote, “Who’s bright idea was it to tell Drake to follow my wife on Instagram? I don’t have beef with no one,” he continued. “Love everyone but don’t follow my f–king wife on Instagram. Ima focus on my family And you keep my family out of all of this wrestling foolishness.”

West also shared, “Imagine having a problem with somebody and they follow your wife on Instagram. We truly wish this man the best and pray that he will find the same happiness that we have.”

As the feud was unfolding, Kim Kardashian came to Drake’s defense stating, “@drake Never threaten my husband or our family.”

Drake is not letting this feud get to him

Even though Kanye West has continually gone back and forth with Drake on Twitter, Drake has been trying to turn the other cheek.

The rapper felt as though it was best if he unfollowed Kim Kardashian in order to avoid continuing any possible drama with Kanye West into the New Year.

Drake still follows a few Kardashian-Jenner family members and even had a New Year’s Eve party that had Kendall and Kylie Jenner in attendance.

There is no telling when these two rappers will resolve this ongoing feud. Since Kanye West’s recent Twitter rant, nothing else has been said about the situation.

Drake has been laying low and hasn’t made any contact with Kanye West or Kim Kardashian.

Now that the new year has started, maybe these two rappers will reach a truce and have a drama-free year.