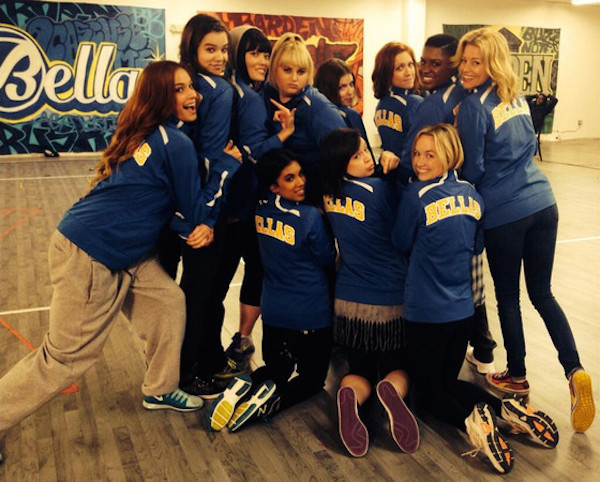 Pitch Perfect 2 has a lot to live up to given that the original film was such a worldwide hit, earning big bucks at the box office and even garnering a top 10 single in Anna Kendrick’s “Cups.” It’s a testament to the 2012 movie’s success that news of the sequel spurred such strong reactions, with some expressing genuine excitement and others claiming they should leave well enough alone. But while everyone seemed to have an opinion about it, no one actually knew what the follow-up flick was really about. That’s finally changed thanks to director Elizabeth Banks (who played a small but extremely memorable role in the first film). In a recent interview with Yahoo, Banks spilled some new details about the upcoming movie’s plotline, including where, exactly, the viewers can expect the sequel to take their favorite on-screen acapella group, the Barden Bellas.

As most already know, Pitch Perfect 2 will feature much of the original cast, with Anna Kendrick, Rebel Wilson, Brittany Snow, Anna Camp, Hana Mae Lee, and Alexis Knapp reprising their roles in the Bellas and Skylar Astin and Adam Devine returning as members of the Treblemakers. Per Yahoo, the sequel, penned by Kay Cannon, will be set during much of the crew’s final year in college. Banks declined to comment on the status of the relationship between Beca (Kendrick) and Jesse (Astin), who began dating at the end of the original film. But according to the first-time director, they, along with the other senior characters, including Wilson’s Fat Amy, are all struggling to come to grips with the fact that they’re graduating soon.

“They’re coming to the end of their time as Bellas and figuring out how to sort of leave the nest and the comfort of each other’s friendship and figure out what they’re going to do with the rest of their lives,” Banks explained.

In addition to the returning characters, moviegoers can also expect to see some new faces. Hailee Steinfeld (Ender’s Game) and Katey Sagal (Sons of Anarchy) will both be joining the cast, presumably as two new members of the now national-winning Bellas. They’re not the only recognized faces making an appearance in the upcoming movie. While Banks confirmed that Taylor Swift will not be appearing in the film as previously rumored, she did reveal that some real acapella groups, like the Filharmonic, Penn Masala, and the Pentatonix will be making cameos. If the latter sounds familiar, it’s because the five-person ensemble won the third season of NBC’s competition The Sing-Off. According to Entertainment Weekly, the band will be playing not themselves, but a rival performance group to the Barden Bellas. They don’t have any actual dialogue, but they will apparently be performing a song that they reportedly arranged themselves.

Of course, the real question on everyone’s minds is what songs will the characters be covering this time around? Unfortunately, Banks is determined to keep details about the music a surprise. The soundtrack was obviously a huge part of the success of the first film, largely because of the breakout hit “Cups.” But Banks is well aware that particular track could have very well been a one-off.

“’Cups’ was like lightning in a bottle. It was a really authentic phenomenon that came from people through enjoyment and love of the movie,” she explained. “If something comes of [the singing and dancing] on the level of “Cups,” that would be incredible but, of course, our expectation is just to go out and make a good movie.”

Banks certainly has a fair share of pressure on her to make it a good movie — not only because of the success of the first one, but because this is her first directorial effort. One advantage? The entire reason Banks signed up to create the sequel, as she herself has explained, is that she loves the Barden Bellas as much as moviegoers seem to and wanted to “spend more time” with them. Hopefully, that will translate to a sequel that will leave fans of the first film entertained and satisfied.