Emma Stone and Other Celebrities Explain How They Manage Their Anxiety

Nearly one in every five people in the U.S. has some form of anxiety — and yes, this includes some of your Hollywood favorites. Despite the glamour of the movie star lifestyle (and even because of it!) celebrities must balance working, keeping a personal profile, and making time for their own privacy. Beyond those external stressors may lay an anxiety disorder that public figures don’t feel comfortable disclosing.

And that’s OK — to each their own — however, these actors, singers, and authors inspired fans to disclose their mental health issues and offered sound advice on how they cope with their anxiety on a daily basis.

The Academy Award and Golden Globe winner keeps a tight schedule to coordinate her work, press events, personal life, and downtime. Three years ago Stone was coming off the success of her first Broadway role with Cabaret and preparing to promote La La Land, her soon-to-be hit film costarring Ryan Gosling.

Stone recently opened up to close friend Jennifer Lawrence (who also shares her experience with anxiety below) about how her anxiety began. “Yeah, when I was seven. That’s when I started having panic attacks, which I’ve talked about pretty extensively. I think your wiring is just kind of what you are. My mom always says that I was born with my nerves outside of my body. But I’m lucky for the anxiety, because it also makes me high-energy.”

Stone’s parents sought the help of a therapist, but it was joining the local youth theater that truly helped her in the long run. “There’s something about the immediacy of acting,” she said, “You can’t afford to think about a million other things … Acting forces me to sort of be like a Zen master: What is happening right in this moment?” 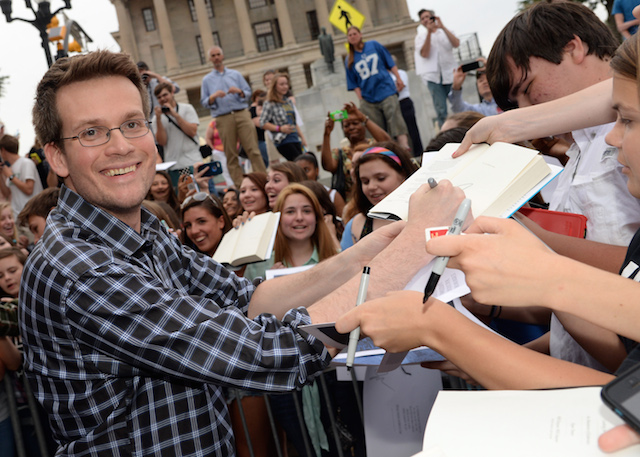 John Green is a Printz award winner, bestselling author, and mental health advocate — both for himself, the people around him, and through his fictional characters in popular Young Adult novels like The Fault in Our Stars and Paper Towns.

Green revealed his personal mental health struggles and success with cognitive behavioral therapy on a Reddit thread in 2015. “I just have to integrate [my anxiety] into my life, as I would for any chronic illness. That can be difficult during periods like this one where work stuff is extremely public and extremely intense, but it helps tremendously that this is something I’m choosing to do.” Green further explained that doing something he genuinely cared about and focusing on why he was doing it in a meaningful way was helpful to him.

When a reader asked him for advice on coping with anxiety, Green told them he believed taking care of yourself first was the most important step.

“The main thing I would say is to take care of your health–make sure you have a counselor or psychologist or whatever who you’re comfortable with, and make sure you have access to the medications you need or whatever treatments work for you. You have to take care of yourself, and sometimes that can be hard when everything feels new and discomforting and overwhelming.”

Yes, even one of the highest-paid actresses in Hollywood can have chronic anxiety. Lawrence rose as more than just a celebrated actor when she became a pop culture figure famous for her candid interview responses, uncanny ability to consistently trip and fall at award shows, and close, unexpected friendship with Kris Kardashian.

Lawrence disclosed comforting and vulnerable information to her fans when she revealed to the New York Times that she “deals with anxiety” in a way many of us do — one that shouldn’t be stigmatized — with a prescription.

“I find a certain peace by thinking of me in public as sort of an avatar self. You out there can have the avatar me. I can keep me. And I just try to acknowledge that this scrutiny is stressful, and that anyone would find it stressful. So I’ve got to try to let it go, and try to be myself, and focus on important things, like picking up dog poop.”

Lady Gaga stripped down to reveal her experience with anxiety. | Lady Gaga via Instagram

Lady Gaga made her way onto the pop music scene as a meat-wearing, provocative, deep-voiced force to be reckoned with. Beyond the controversial red carpet looks and experimental music videos was Stefani Germanotta, a New York City native who’d been raised to be “a cultured young woman.”

Gaga experienced both anxiety and depression at a young age. She used her platform as a successful singer to celebrate her self-titled “little monsters” with the Born This Way Foundation aimed at helping fans cope with their mental problems.

The singer also revealed a hard truth while speaking to Yale University students at the Emotion Revolution summit in 2015, describing how she changed her decision-making to alter her mental health.

“I started to say no. I’m not doing that. I don’t want to do that. I’m not taking that picture, I’m not going to that event, I’m not standing by that because that’s not what I stand for. And slowly but surely, I remembered who I am. And then you go home, and you look in the mirror, and you’re like, ‘Yes. I can go to bed with you every night.’ Because that person, I know that person.”