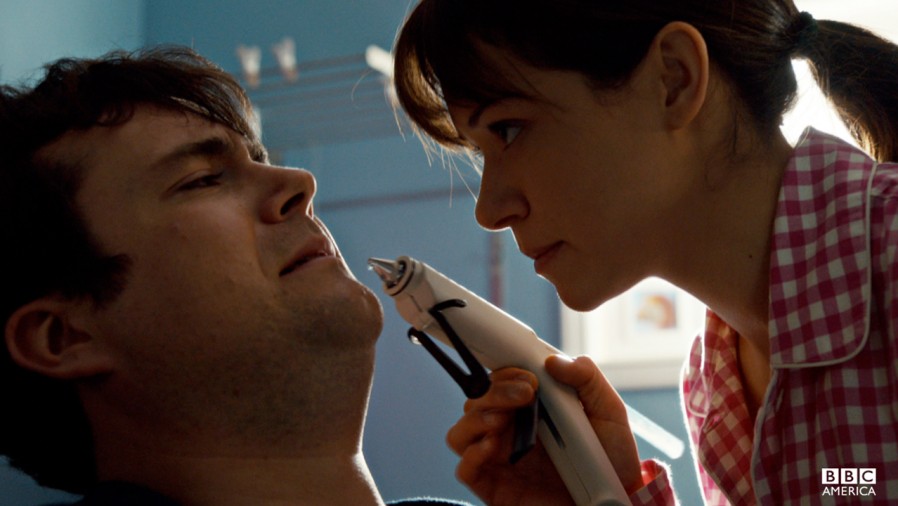 Having the somewhat misleading moniker “science-fiction” slapped onto a title can be damning for a television show vying for a wider viewership and serious critical consideration. Orphan Black is undeniably, unquestionably, and unabashedly science-fiction, but it isn’t just science-fiction. A bleak but brazen drama about a young woman who discovers she’s a clone, the product of ambiguous eugenics experiments performed by (who else?) shadowy conglomerates, Orphan Black is as concerned with familial relationships, the constrictive template of suburban living, and the stigma of “alternative lifestyles” as it is with test tubes, entanglements of cables and wires, conspiratorial agents, and other sci-fi staples.

Created by Graeme Manson and John Fawcett, the show takes place in Canada, which looks an awful lot like any Midwestern state in America, or in any metropolitan area on the coast. The setting is, essentially, Generica, and what matters here isn’t the where as much as the who and why.

Whereas the other twistiest show on television, The Killing, uses the grungy, sordid, back-alley streets of Seattle and its surrounding woodlands (which look like the settings of the Brothers Grimm’s nightmares) to lend an air of reality to its otherwise brooding, histrionic escapism, Orphan Black uses its ambiguous setting and its various accent, styles, fashion to depict the modern world and the ever-thickening interlacing of cultures.

Maslany plays Sarah Manning, a punk-rock 20-something with a limey accent and a young daughter who currently lives with Manning’s former foster mother. In the pilot, Manning sees a young woman who looks exactly like her standing on an otherwise empty train platform at night. The two share a fleeting stare, and the nameless woman leaps in front of a passing train. Manning, being an expert con artist (with a record), takes the dead woman’s bag and decides to slip into the woman’s life, which can’t possibly be worse than her own.

Of course, it is worse. Far worse.

As Manning meets more women who look like exactly like her, with slight superfluous variations (dreadlocks, glasses, bad soccer mom haircut, different accents), the plot thickens to the point of bursting. But Manson and Fawcett keep everything under control, and Maslany, who plays at least six characters (and possibly more, depending on how far into the series you are), is somehow incredibly believable as every single person. Once you get over the initial awe of one woman playing four women on screen at one time, you start to appreciate the subtitles in her performance: the different facial ticks, the different walks, the different attitudes. And when the women start to impersonate each other, the ticks and walks and attitudes overlap in intricate ways that no other TV show has done before.

That Manson and Fawcett are are behind such a great show is — and I mean this with all sincerity –a puzzle, since neither of them has ever helmed a good movie or show before. Manson co-wrote the polarizing sci-fi film The Cube, which has accrued a cult following (as do all films that earn mixed reviews in the Internet age), and Fawcett directed such classic shows as Xena: Warrior Princes, Blade: The Series, and the riot grrrl werewolf film Ginger Snaps, which is, you guessed it, a cult favorite.

But Orphan Black is so far beyond what either creator has ever done before. In a way it makes sense, as the tone fluctuates madly (but it works, since our main character’s life tonally fluctuates madly), and the twists and turns just keep piling up until the narrative resembles a slinky. It shares The Killing‘s penchant for twists and red herrings, but it doesn’t rest on them. It moves too quickly to dwell on any single subversion, because there’s always another already starting.

Jordan Gavaris plays Felix, Manning’s gay foster brother, and he has a magnetic, illustrious chemistry with Maslany. As flamboyant and lanky as he is, with his mesh underwear and cryptically sexual paintings, he’s never a stereotype or cliche. He provides comic relief but not at the expense of characterization. He’s not the funny gay friend as much as he is an integral part of the show’s ever-evolving puzzle, and he just happens to be gay and really funny.

Maslany winning Best Actress at the Critic’s Choice Awards bodes well for her chances at nabbing an Emmy nomination. Assumedly, Manson and Fawcett are campaigning harder for her this year, as they were both surprised that she wasn’t nominated last year. (She does give at least six great performances here.) While the show doesn’t have nearly the same viewership as its would-be competition, its fan base is fervid, and it has momentum behind it now.