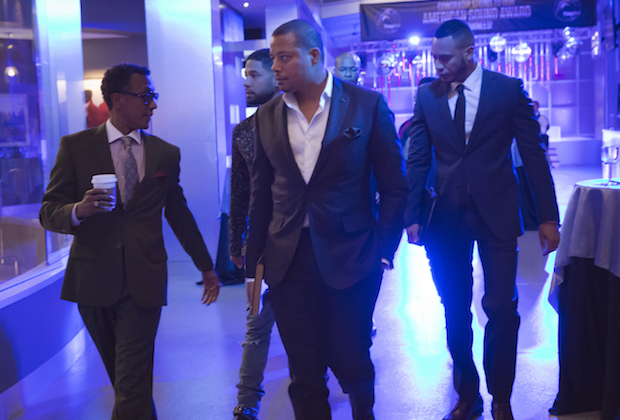 Empire‘s second season has been somewhat of a mixed bag so far. While still packed with plenty of addictive and twisty drama, recent episodes have gotten some flack for rushing through storylines, as well as overdoing it on the celebrity guest stars. All of the above were evident on the show’s explosive midseason finale, which saw the ousting of Lucious Lyon (Terrence Howard) as CEO of Empire and the (probable) death of one series regular. On the heels of the jam-packed episode, executive producer Danny Strong and showrunner Ilene Chaiken are revealing some details about what fans can expect in the second half of Season 2 — including one major change that may help get Empire back on track (spoilers ahead!).

In the midseason finale, we saw the surprise return of Hakeem’s ex, Camilla (Naomi Campbell). This time around, she’s married to Lucious’s business partner, Mimi (Marisa Tomei), and has somehow manipulated her way into taking control of Empire. Having now replaced Lucious as the head of the company, Chaiken says that fans can expect her to stir up plenty more trouble for the Lyon family in the second half of the season.

“What we’re saying essentially is that the baton has been passed to Camilla; Mimi has been a shill for her,” she explained, per TVLine. “And as Mimi goes off to get [cancer] treatment, Camilla steps into that role in a much more vengeance-minded way, as you can imagine.”

She won’t be the only one causing chaos. In the winter finale, Hakeem (Bryshere Y. Gray) shocked everyone, especially his family, when he cast the deciding vote that overthrew Lucious as Empire’s CEO. “The decision to betray his father is so impulsive and impetuous and momentary, I don’t think he knew necessarily that he was going to do it. It’s a decision he made in the moment,” Chaiken says of the shocking choice.

That decision will earn him some major backlash from the family (as we already started to see in the finale, with Lucious falling into Cookie’s arms and proclaiming, “I want to kill Hakeem”). “It’s certainly dire for Hakeem and the whole family. Lyon Dynasty is one thing, but as Cookie said to Hakeem, ‘Empire is our legacy,'” Chaiken explained. “Empire is their lifeblood — and Hakeem has just given it to the enemy.”

Perhaps even more shocking than Hakeem’s decision was the possible death of a pregnant Rhonda (Kaitlin Doubleday), who gets pushed down the stairs by an unseen figure (most likely, Anika). But Chaiken says all hope is not lost for her yet. “I want you to come back hoping Rhonda is alive — and thinking that she could be,” she said.

As the family deals with its Lyon’s share of drama (that pun writes itself), Strong says viewers can also expect another major change in the show, story-wise. So far, Season 2 has placed a big emphasis on guest stars, with everyone from Chris Rock to Pitbull to Alicia Keys to show co-creator Lee Daniels himself making an appearance. While some of the cameos have been fun, having so many of them has become distracting, as Strong himself acknowledged.

“I do think we’ve had too many guest stars and we’ve already started course-correcting in the last portion of this first part of Season 2, especially in the tail end. We’ll be seeing even less guest stars going into the second half of the season as the show will get a little tighter, more focused on the Lyon family and our core group of characters,” he explained, per Deadline.

That should come as good news to both fans and critics alike, many of whom suggested that the celebrity appearances are starting to feel somewhat forced and are actually detracting from the plot at this point, instead of enhancing it. Perhaps bringing the attention back to the main group of characters will make for a less scattered and more cohesive storyline, a la Season 1.

Still, those who enjoy the guest stars don’t need to worry. Strong says that there will be more celebrity cameos going forward, but they’ll occur less frequently and more organically, only when the story calls for it. Whether that change will be significant enough to make for a stronger, more crowd-pleasing second half of Season 2 remains to be seen.