Every Single Detail You Missed From the New ‘Black Panther’ Trailer

Marvel and Disney just dropped the full-length trailer for the much anticipated Black Panther movie, and quite frankly, we haven’t yet recovered from the majesty of it all. Directed by Creed’s Ryan Coogler, the film will follow T’Challa (Chadwick Boseman) who, in the aftermath of his father’s death (which we witnessed in Captain America: Civil War), returns home to Wakanda to claim his throne.

However, as we all know, great power brings forth great adversaries and struggles — including those who want to take over Wakanda for themselves. The villainous Erik Killmonger (Michael B. Jordan) and the outside world who want to harvest the immense resources of the country are just a few things T’Challa is up against. Disney gave us a snippet of what we might see this past summer when the first Black Panther teaser trailer dropped. However, the new trailer is bursting full of gorgeous sets, stunning characters, and exquisite costumes.

Quite frankly, it’s everything we could have hoped for and more.  Though we have to wait until Feb. 16, 2018, to see the film in full — here are all the tiny beautiful details you missed from the trailer.

Forget Marvel — this is a Coogler film

When the casts of #ThorRagnarok and #BlackPanther come together, this is the epic result. #MarvelSDCC (via @hollywoodreporter)

One of the reasons why the Marvel Cinematic Universe thrives is because all of the films seem to compliment one another — no matter who might be directing or starring in them.

However, what makes Black Panther so distinct, and unlike anything else we’ve seen before in MCU, is Coogler’s use of vibrant colors and what appears to be an outstanding soundtrack. The 31-year-old director definitely put his own stamp on this flick. 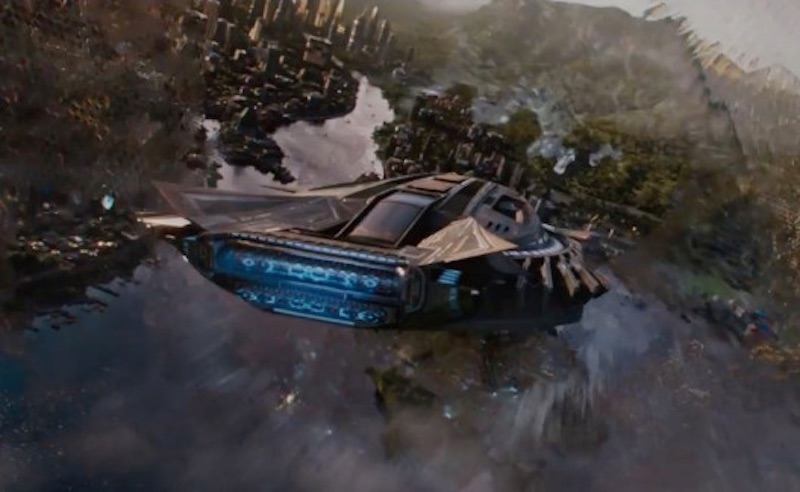 Let’s just get into how glorious Wakanda looks. Danai Gurira, who plays one of Black Panther’s bodyguards, Okoye, in the film, introduces Wakanda by saying, “We are home.” We then witness Black Panther’s ship go bursting through the clouds.

Wakanda is opulent, it is high tech, it is everything we could have hoped for — Afrofuturism at its best. 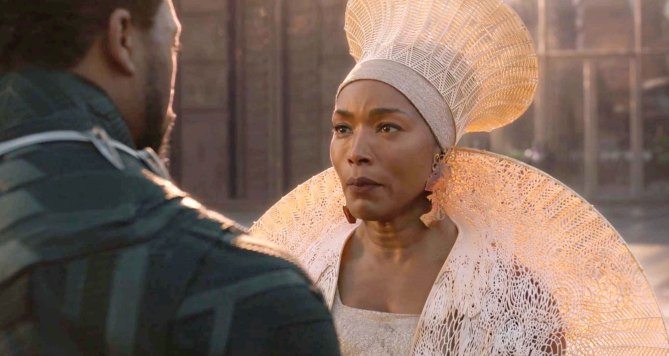 We’ve been desperately waiting to see more glimpses of Angela Bassett as Ramonda, T’Challa’s mother and the trailer finally reveals her. In the trailer, we witness her telling T’Challa that it is his time to take the crown.

The film will be full of strong female characters. | Marvel

So how badass are a group of female bodyguards draped in red? We got a glimpse of The Dora Milaje when Okoye told Black Widow (Scarlett Johanson), “Move or you will be moved,” in Captain America: Civil War.

But seeing all the ladies in formation is something else entirely.

Did anyone else catch that dope handshake between T’Challa and his baby sister, Shuri (Letitia Wright)? In the comics, Shuri eventually becomes a Black Panther, so we can expect to see a lot more of her — especially since Wright will be reprising her role in Avengers: Infinity War.

T’Challa is the hero we all need. | Marvel

T’Challa is cocky — and we like it. In the trailer, Okoye warns him not to freeze when he’s facing his enemies. In return, he scoffs at her saying, “I never freeze.”

Then, he proceeds to throw on his mask and shoot out blue circular objects which are some high-tech weapons that we obviously couldn’t begin to dream of.

That blue and purple sky

The film is packed with gorgeous visuals and action. | Marvel

We have no idea what the climate of Wakanda is like. But in that quick shot of T’Challa wearing white and walking under a purple and blue sky, all we know is that we need more. How majestic is that?

Disney needs to be sure to save these effects for the live-action version of The Lion King.

Nothing better than a car that drives faster than the speed of light. | Marvel

Speaking of high-tech, let’s discuss these flying cars that look like they may be invisible to anyone who’s not in Wakanda.

Shuri is seen in the trailer driving one of her own, and it certainly doesn’t look like she’s going anywhere near a speed limit. Where can we purchase one?

We all know that Michael B. Jordan’s Erik Killmonger wants to be king. But we certainly didn’t realize he would be cloaked in his own vibranium, gold-adorned Black Panther-like suit. We have no idea how this is all is going to pan out, but we do know that we aren’t worthy.

Also, did anyone else catch that glimpse of a Purple Panther?

‘The Revolution Will Not Be Televised’ Remix

Bringing the brand new #BlackPanther poster to you guys first! We hit theaters February 16, but you can check out the new trailer NOW. http://fb.com/chadwickboseman [ in bio]

Coogler has made some amazing choices, including the decision to remix Gil-Scott Heron’s iconic rallying call, “The Revolution Will Not Be Televised.” Is it February yet?