Every Time Mila Kunis Got Super Candid About Parenthood

Mila Kunis may be an A-list celebrity, but above all else, she’s a mother. She and her equally famous husband and That ‘70 Show co-star, Ashton Kutcher, are parents to their daughter, Wyatt, and their son, Dimitri.

Just like any other mother, Kunis has gone through the difficulties of figuring out how to be a parent. Here’s every time Kunis got super candid about parenthood.

Not wanting to raise ‘a**h*le’ kids

During an appearance on The Kyle and Jackie O Show in 2016, Kunis got real about how she hopes to raise her kids with Kutcher:

The one topic of conversation we had even prior to ever having kids was always, “How do you raise a child to not be an a**h*le?” It’s so important because we both came from pretty solid poverty backgrounds and grew up very poor and are very much self-made and are very aware of what a dollar is worth … It’s a matter of teaching them from a very early age that, you know, “Mommy and Daddy may have a dollar, but you’re poor. You are very poor, you have nothing. Mommy and Daddy have a bank account.”

Her views on public breastfeeding

Kunis has been subject to shame for breastfeeding in public. But she told Vanity Fair in 2016, “If it’s not for you, don’t look.” She explained:

I support every woman’s choice in what she wants to do and whatever makes them happy, but for me, I did nurse my child and I literally breastfed everywhere. There were many times where I didn’t bring a cover with me, and so I just did it in a restaurant, in the subway, in the park, at airports, and in planes. Why did I do it in public? Because I had to feed my child. She’s hungry. I need to feed her whether it’s out of a bottle or out of my boob no matter where I was.

How her second pregnancy was different

When Kunis was pregnant the second time around, she was shocked to learn just how different it felt. She admitted on Live With Kelly! in 2016 how her mindset completely changed:

With the first one, I was on the app every day, like, “What food size is my baby?” It was like, “It’s the size of a grape. It’s the size of an avocado.” The other day, someone asked how far along I was. I was like, “I have no idea. I can tell you when I’m due, and then do the math afterward.” For the first one, I could tell you precisely what she was developing, what stage it was. The second one, I’m running after a toddler, or working, so I’m like, “Oh, that’s right: I’m pregnant.” 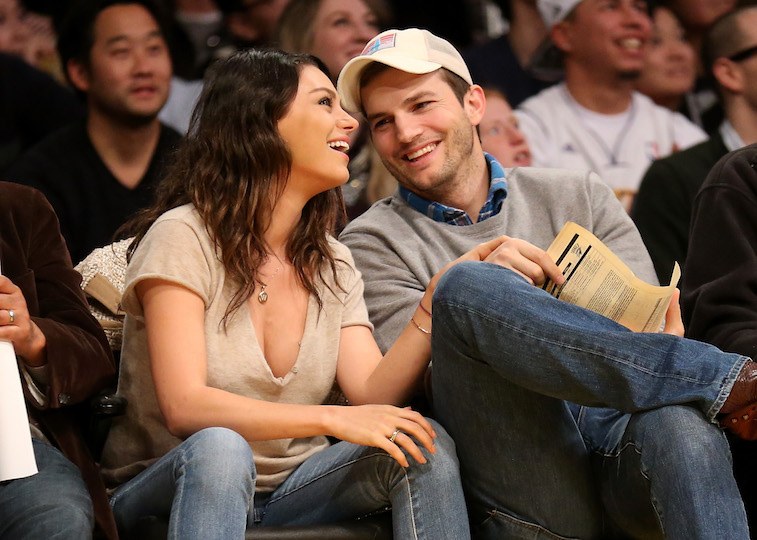 Being against men saying ‘we’re pregnant’

It’s Kunis’ firm belief that men haven’t earned the right to use the phrase, “we’re pregnant.” She explained on Jimmy Kimmel Live!:

Stop saying, “We’re pregnant.” You’re not pregnant! Do you have to squeeze a watermelon-sized person out of your lady-h*le? No. Are you crying alone in your car listening to a stupid Bette Midler song? No. When you wake up and throw up, is it because you’re nurturing a human life? No. It’s because you had too many shots of tequila. Do you know how many shots of tequila we had? None. Because we can’t have shots of tequila. We can’t have anything, because we’ve got your little love goblin growing inside of us. All you did was roll over and fall asleep.

What’s exciting after having kids

Kunis admitted that her perception of what qualifies as “exciting” has totally changed after having kids. “We used to be like, ‘What’s the coolest club?,’” she told Entertainment Tonight. “And [now] I’m like, ‘Let me tell you about the zoo in Atlanta and the bouncy house.’ There’s not one kid activity that I haven’t done yet with my child!”