Every Time the ‘Home Alone’ Villains Would Have Died

Since its release in 1990, Home Alone has become something of a Christmas classic. During the film (spoilers ahead, for those who have somehow missed it), 8-year-old Kevin McCallister gets left behind when his family travels to Paris, and has to defend his home from a pair of nefarious burglars. Kevin (Macaulay Culkin) turns the house into a succession of booby traps the Wet Bandits Marv (Daniel Stern) and Harry (Joe Pesci) stumble through. Viewers have to wonder: Would they really have survived all of his pranks and walked away basically unscathed? A few experts weighed in on how dangerous these injuries would actually be, as well as how they pulled off the record-setting stunts.

1. BB gun shot to the forehead and groin: Not fatal but not comfy 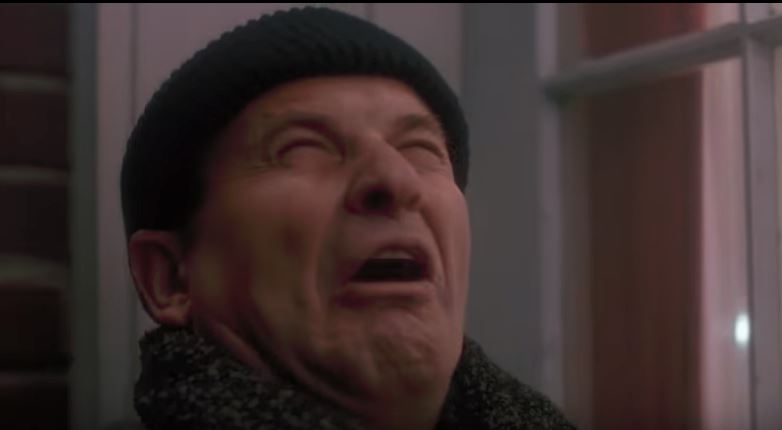 Marv get a BB in a sensitive spot. | Michael David via YouTube

Kevin shoots Harry in the groin and Marv in the forehead with a BB gun, which makes all boys say, “that’s gotta hurt.” But how much damage would that actually do? The Week asked Dr. Ryan St. Clair of the Weill Cornell Medical College to weigh in. “Classic air-powered projectile weapons typically have muzzle velocities of 350 feet per second or less. A BB fired at close range from such a weapon could break the skin, but will not penetrate the skull, and is unlikely to penetrate Harry’s scrotum, especially through fabric.” Some doctors disagree with his assessment, but we don’t see anyone lining up to try it at home.

Next: This next injury would probably spell lights out for Marv.

2. Iron to the face: At least two black eyes 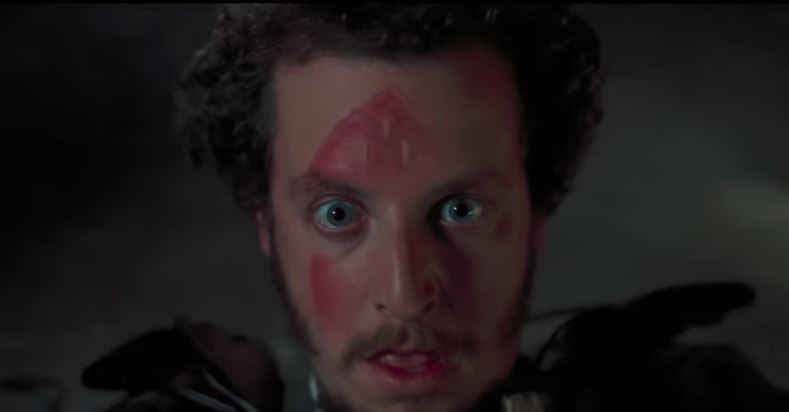 When Marv grabs what he assumes is a light cord, a hot iron falls down and smacks him right in the face. He basically shakes it off, but St. Clair said that would not happen in real life. “Let’s estimate the distance from the first floor to the basement at 15 feet, and assume the steam iron weighs 4 pounds,” he explained, noting that the iron hits right at the bridge of Marv’s nose. That would create what’s known as a “blowout fracture,” a blunt-force trauma strong enough to fracture the bones around the eyes. At the very least, Marv would suffer serious and debilitating disfigurement and double vision.

Next: Things got hot-hot-hot for Harry in this next scene. 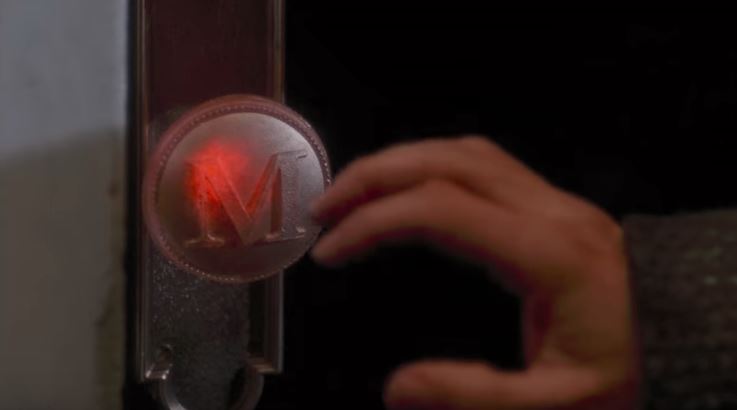 This guy would probably lose a hand. | Movieclips via YouTube

After Harry slips and slides up the iced front steps, he grabs for the doorknob. Unbeknownst to him, Kevin heated it to glowing proportions, searing the letter “M” into Harry’s hand. The pain shocks Harry so badly, he falls backward down those same steps. St. Clair said that a glowing red doorknob rests at about 751 degrees Fahrenheit, strong enough to make Harry’s hand just about burst into flames. For reference, sticking his hand in 155-degree water would cause third-degree burns. “Assuming Harry doesn’t lose the hand completely, he will almost certainly have other serious complications,” the doctor explained.

Next: The criminal would likely suffer serious complications from this next injury.

4. A blowtorch to the top of the head: Rotting skull 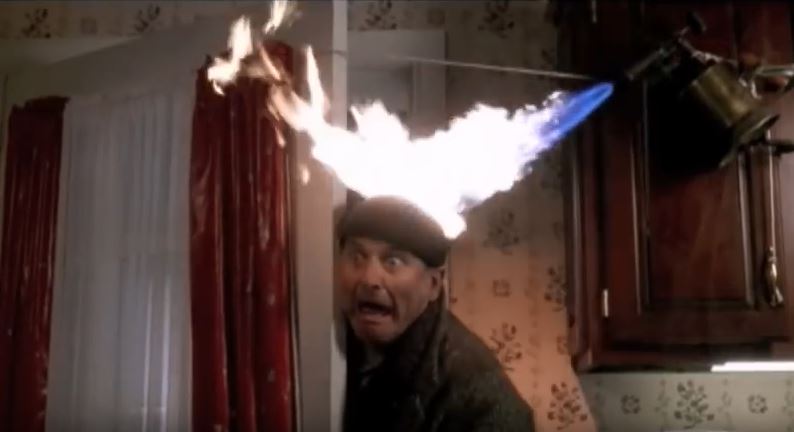 He would likely need a new skull after this. | editingsithlord via YouTube

Even after Harry accidentally triggers a blowtorch to the top of his head, he doesn’t move out of the way for a good seven seconds. St. Clair said that would be enough time to cause actual rotting of his skull. That means the skin and bone suffer such damage, he would likely need a transplant. EMT Joseph O’Hare told Motherboard sticking his head in the snow was a smart move — assuming he doesn’t go into shock as a result.

Next: Anyone who has ever stepped on a Lego knows this pain well.

5. Walking on glass ornaments: Not walking on anything else ever again 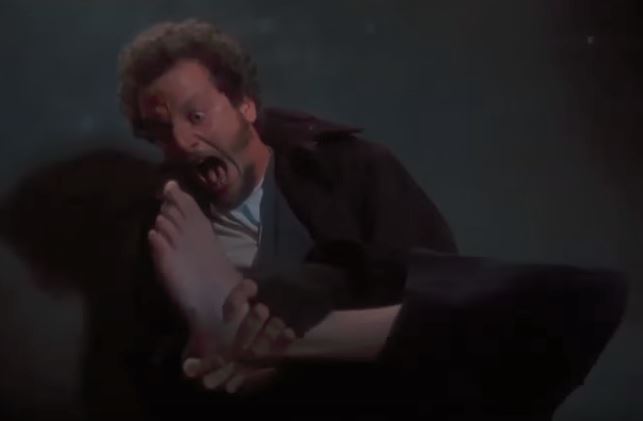 This would lay a guy up for awhile. | Bryan Otero via YouTube

After Marv walked up a staircase full of tar and stepped on a 3-inch nail, he somehow remained upright enough to continue. The clumsier Wet Bandit tried to get in the window, landing directly on a bunch of glass ornaments in his bare feet. While certainly painful, this one pales in comparison to Marv’s injuries so far. It wouldn’t feel great, but a little glass in the foot also does not pose a serious health risk — unless infection sets in. As Dr. Diego Ponieman posited to Thrillist however, even if he could remove the glass, he would have a hard time putting weight on those feet afterward.

Next: Kevin really came out swinging with this next gag.

6. A paint-can to the face: Knocked out cold 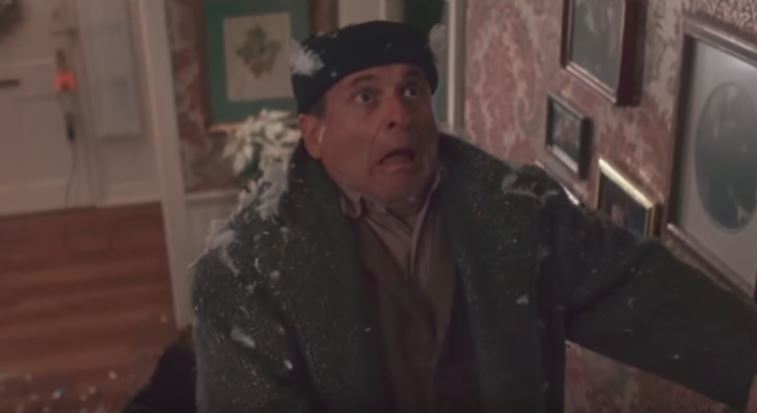 Say goodbye to your teeth. | Flying Orcas via YouTube

After Harry ducks to avoid a swinging paint can, Marv gets it straight in the face. For those of you keeping score, that’s the same face that took an iron a few scenes back. “Assuming the paint can is full (roughly 10 pounds) and the rope is 10 feet long, Marv and Harry each take a roughly 2 kilo-newton hit to the face, St. Clair estimated. “In real life, their faces would be destroyed,” O’Hare weighed in. He added that the resulting fall could cause a brain bleed and a resulting stroke and — you guessed it — death.

Next: The neighborhood villain saved Kevin in this next classic scene.

7. Shovel to the head: Depends on the shovel 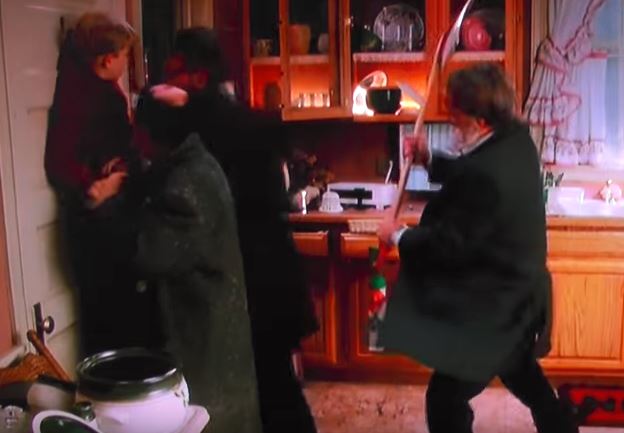 Gramps saved the day in this scene. | Erik Nicholas via YouTube

Toward the end of the film, Kevin manages to lure the bandits to the neighbor’s house, where they almost foil his plan. The pair hang him by his sweater and are setting in for some serious payback, when his elderly neighbor comes up behind and clocks them each over the head with a snow shovel. At this juncture, St. Clair and Ponieman both said the plot becomes ludicrous. “Marv and Harry have both suffered potentially crippling hand and foot injuries. Harry has proved to be nearly impervious to burns, and both managed to retain consciousness after taking a flying paint can straight to the face,” St. Clair said. Bottom line? The two are definitely not walking into any cop car of their own volition.

Next: All of the falls the villains take would definitely make an impact. 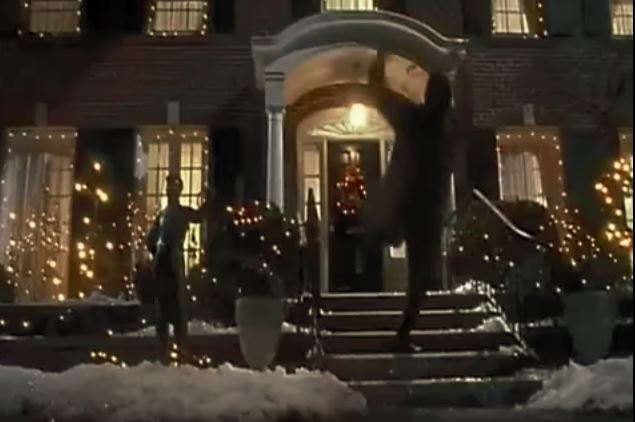 The number of times these guys falls is just insane. | Ryan Smith via YouTube

The villains fall all over the place during the film, at least 15 times. Ponieman told Thrillist the Wet Bandits would probably turn into the broken bandits after just a couple of them. “Neither one would be able to get up after these falls, especially at their age. Any of these tumbles would definitely be enough to send them to the ER, immediately: herniated disks, bruised or fractured tail bones, multiple spinal fractures, broken limbs and ribs, serious deep tissue bruising, internal bleeding — and that’s just a start,” the doctor said. Hitting the tailbone that hard would make even standing very painful, and at their age, would result in lifelong health problems, at minimum.

Next: In a crazy twist, Marv delivers the next blow to his friend.

9. A crowbar to the chest: Broken ribs and internal bleeding 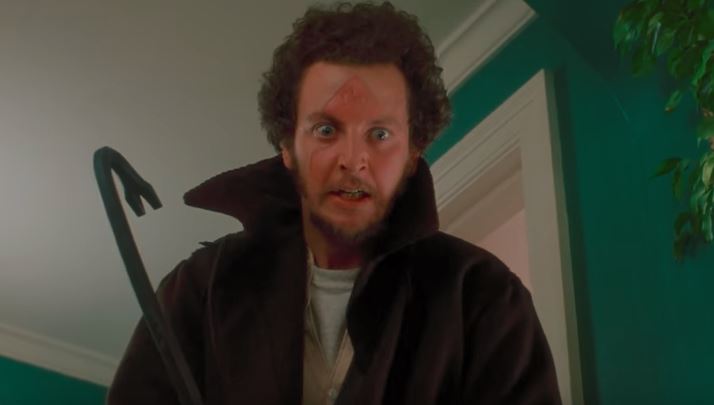 Buzz’s beloved tarantula lands on Marv’s face first, giving viewers everywhere a serious case of the heebie-jeebies. He flings it off and it lands on Harry, at which point Marv has the genius idea of smacking it off his buddy with a crowbar. Ponieman said this would likely result in, at the very least, cracked ribs and possibly internal bleeding or a damaged lung.

Next: Viewers with a fear of heights really winced at this next one.

10. Falling from a tree house: Paralysis or even death 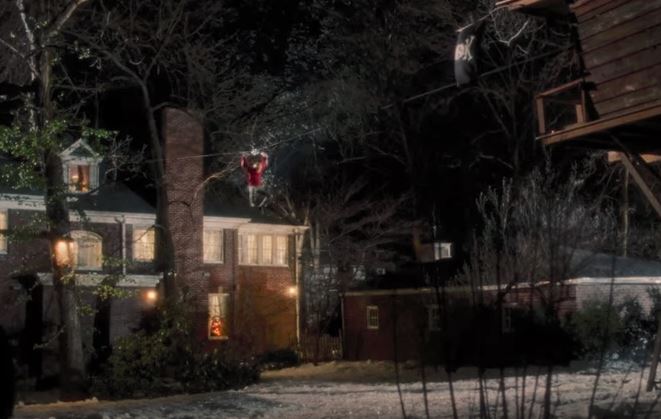 Somehow, the pair managed to scale a rope to Kevin’s tree house, but fall from that height right onto their backs. Panieman said that would likely result in critical injuries and maybe even death. “They would not get up from this one,” the doctor explained. “Expect heavy injuries, possibly critical, especially with everything else they have been through. [They would probably] need a cervical collar for a while.”

Next: Thanks to modern technology, we can see what an R-rated version would look like.

This guy is the real hero here. | BitMassive via YouTube

If the authentic Home Alone effects have you feeling skeptical, one animator has just the cut for you. Canadian animator Sean Fimio’s imagined the realistic injuries Harry and Marv would have sustained and actually added them in. The special effects Fimio added to shorts like Home Alone With Blood #1 and Home Alone with Blood #2 reveal just how gruesome those injuries would have looked in real life. Pro tip: Don’t watch these over lunch.

Next: The director actually worried about the stuntmen during the shoot.

12. Even the professionals got concerned about their safety 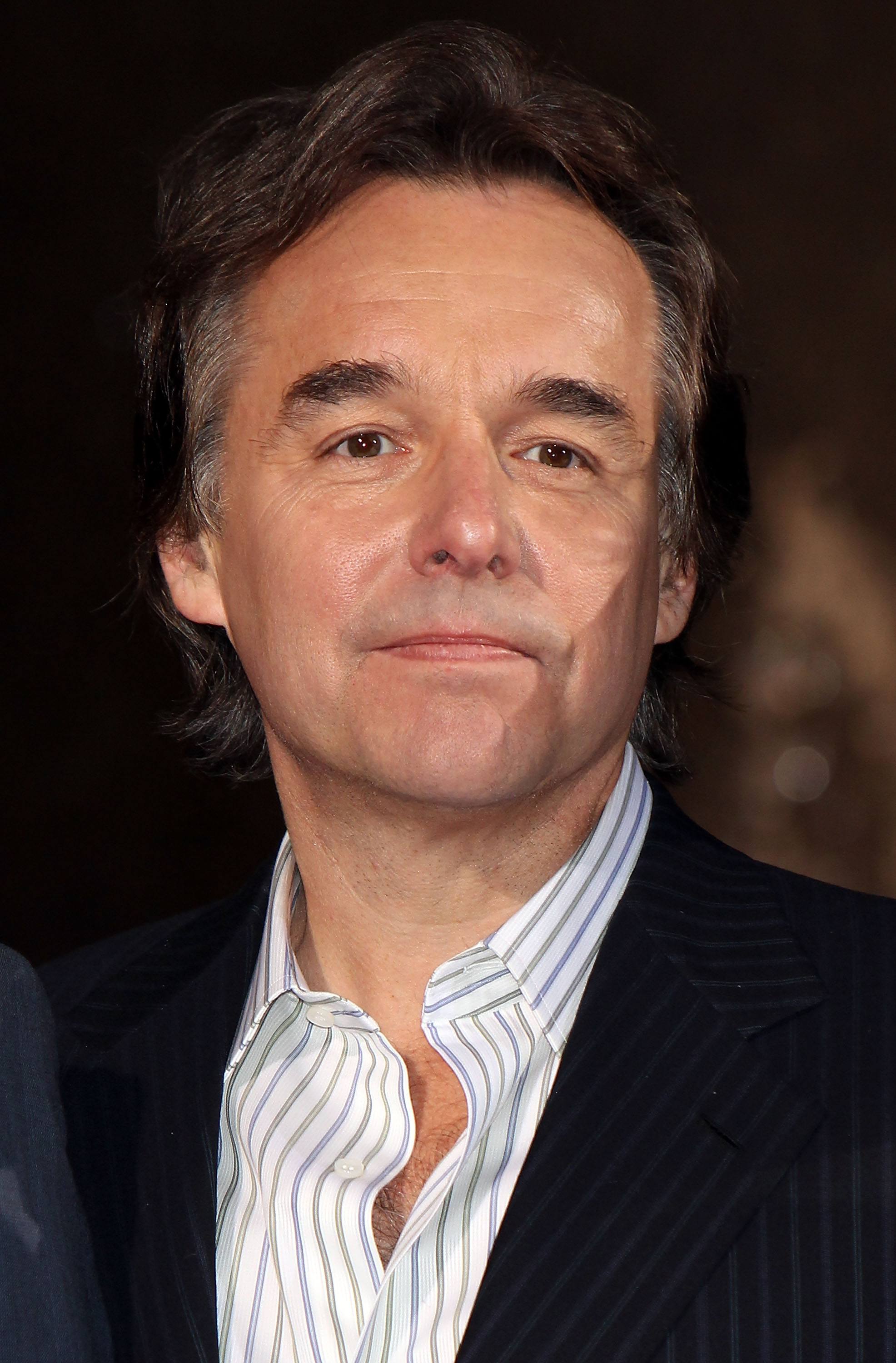 Entertainment Weekly sat down with Home Alone director Christopher Columbus, who said watching the stunts the first time scared him. “Every time the stunt guys did one of those stunts, it wasn’t funny,” he said. “We’d watch it, and I would just pray that the guys were alive. And then they would get up and they were absolutely fine, and then we would watch the playback on video and then we were relaxed enough to laugh.”

Next: Those stunts took some serious work and almost as much risk.

13. A lot of the Home Alone falls look real — because they were 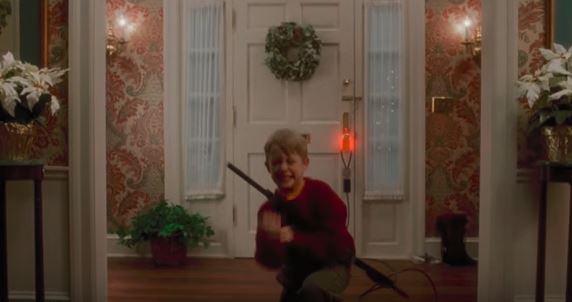 Columbus said that filming the Home Alone stunts literally put lives on the line. “We saved most of the stunts for the end of the shoot until we knew that we got them right. But again, you don’t know. Anything can go wrong on the night of shooting,” he told Entertainment Weekly. They tested the stunts with pads and harnesses but did them without in the actual shoot, for reality’s sake. According to the director, “these guys just really did the stunts.”

Next: In real life, some of the Home Alone stunts cause real injury.

14. We treat these kinds of injuries much more seriously today 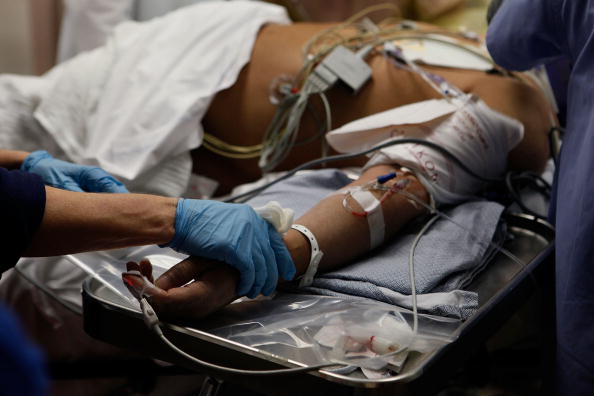 Emergency room doctor Brian Goldman told The Current radio show that he has seen these kinds of injuries — but by accident. “I have certainly seen many people who have unintentionally done things at home and who’ve ended up in the emergency department requiring treatment, especially over the holiday season,” he explained. Today, head injuries in particular aren’t as funny as they were in 1990. “We use to treat these [injuries] as a bonk in the head, you know you had your bell rung. Now it’s all serious stuff.”

Next: Even though the stunt doubles did not injure themselves, they did set precedents. 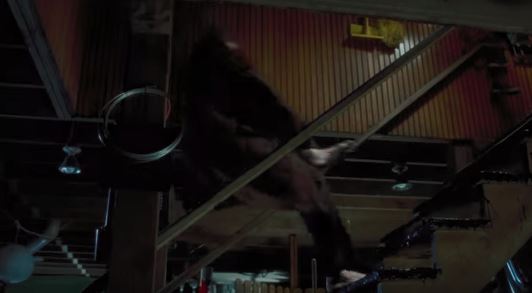 The kind of air these guys got is legendary. | Movieclips via YouTube

As Slate explains, no actors or stunt doubles came to harm during the shoot, but they did some tough stuff. Standing in for Pesci and Stern, respectively, were stuntmen Troy Brown and Leon Delaney. They pair’s several crazy falls, which almost sent Brown and Delaney into orbit, had one hilarious effect. “To this day, you’ll talk to stunt people on other movies and they’ll say something like, ‘And then we’ll just do a Home Alone,’” director of photography Julio Macat said. “That means that they’re gonna fall and get a lot of air.”