We all love a good suspenseful thriller — and for some, horror movies are their favorite type of cinema. Some filmmakers have really taken things to the next level, however. And there are plenty of films in history that have disturbed audiences to the point of making viewers sick.

Here are the most notorious films for making moviegoers feel a bit ill, including one film that may have killed a woman (No. 9).

You probably remember this Oscar-nominated film. James Franco starred in telling the real-life tale of Aron Ralston whose arm got crushed by an 800-pound boulder. In order to live, Ralston had to self-amputate his arm with a pocket knife — and the film showed every grisly detail of the ordeal.

ABC News reports multiple people collapsed while viewing the film during a movie screening. One woman who watched the amputation scene at a guild screening said she felt as though she was going to vomit — and then she promptly fainted. Another moviegoer reportedly had a seizure.

Next: It’s dubbed one of the scariest movies of all time — and you’ve probably seen it.

The story of Regan, the little girl possessed by the devil as told in The Exorcist, will never be forgotten. It may have come out in 1973, but for many horror lovers, it stands as one of the scariest films of all time. The A.V. Club reports there’s local news footage showing audience reactions when The Exorcist first came to theaters. And every reaction from crying, fainting, to sheer terror was observed.

Even scarier, the cast and crew believe scary supernatural happenings occurred during filming, too.

Next: This film may have just been too realistic.

Joseph Gordon-Levitt in The Walk | Movieclips Trailers via YouTube

This one’s not a horror movie, but it’s certainly terrifying. The Walk features actor Joseph Gordon-Levitt as Philippe Petit, the real-life man who walked on a high wire between New York’s Twin Towers in the ’70s. But CBS News reports the heights combined with the 3D film made some viewers seriously ill.

Next: This Hitchcock classic had many feeling ill. 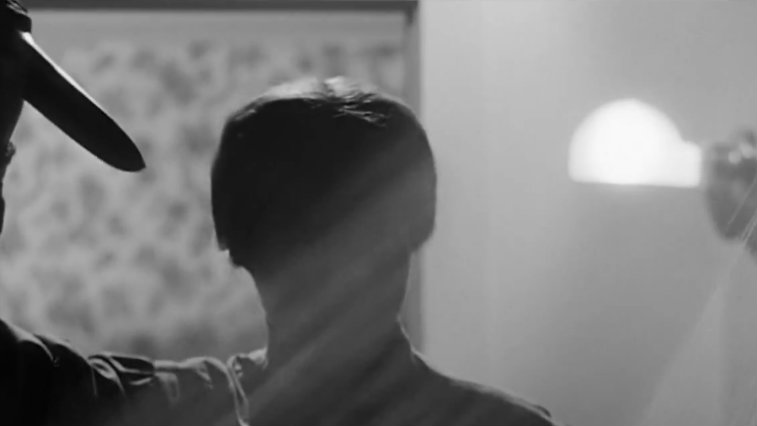 Many think of Alfred Hitchcock as a genius, and horror fans still resonate with Psycho today. It may surprise some to know that Hitchcock wanted audiences to have fun with his film, too. The Guardian reports the director wanted viewers to “scream and yell and so forth,” of course. “But no more than screaming and yelling on a switchback railway … so you mustn’t go too far.”

Next: A report says 250 people walked out of this film.

No one saw this early-2000s revenge thriller coming. Irréversible follows the story of a woman’s sexual assault and her boyfriend’s quest for revenge. It’s violent, grisly, and known as one of the most shocking films ever made.

BBC News reports when the film was shown at the Cannes Film Festival, 250 viewers walked out. Not only that, but 20 reportedly fainted during the viewing and needed oxygen due to watching the graphic content. As Lieutenant Gerard Courtel said at the time, “In 25 years in my job I’ve never seen this at the Cannes Festival.”

Next: You probably remember this creepy old film. 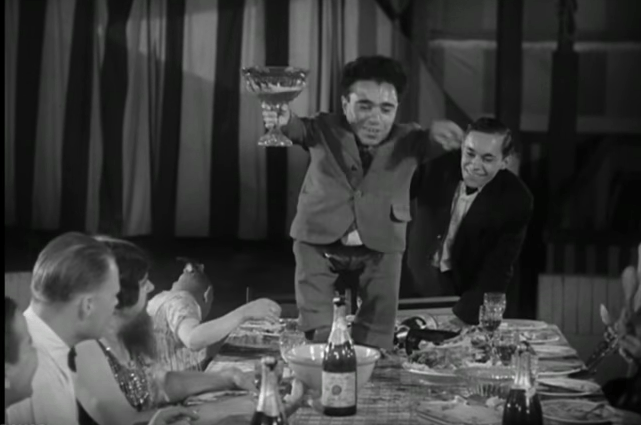 This may be one of the first movies on the list to really make audiences feel ill. Buzzfeed reports director Tod Browning, who was known for making Dracula just the year before Freaks, wanted to make a movie that would truly terrify his audience. And he succeeded with this one, which chronicles the lives of the people working in a circus freakshow.

This one’s particularly controversial since Browning used real carnival workers with physical abnormalities to portray the characters. One woman even claims the shock of the film caused her to miscarry.

Next: The way this movie was filmed made audience members vomit.

This low-budget horror flick delighted many with its originality. It’s shot with Hi-8 video and 16-millimeter hand-held cameras as it’s told from the first-person perspective of friends looking for the infamous Blair Witch. And the unsteady camera usage alone was enough to nauseate audiences.

The Guardian reports so many cinema-goers were getting ill that movie theaters were giving passes allowing patrons to come in and out of the theater to vomit if necessary. Some theaters also issued a nausea warning and politely asked folks to not throw up in the lobby.

Next: This Stanley Kubrick classic also came with a ton of shocks. 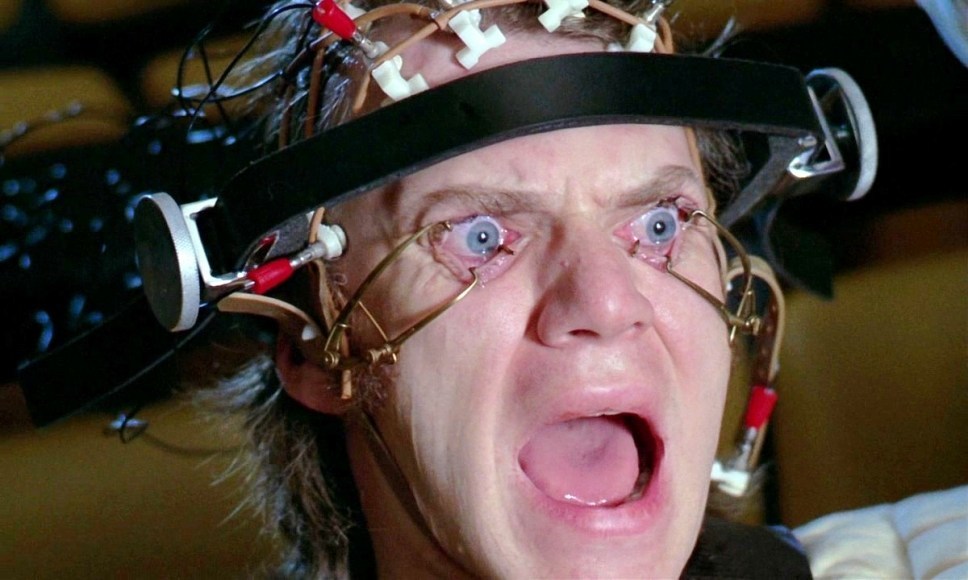 Malcolm McDowell as Alex in A Clockwork Orange | Warner Bros.

You’ve certainly heard of this film — and if you haven’t seen it, you may also be familiar of with the novel of the same title. Director Stanley Kubrick brought the story of dystopian Britain to life with scenes of murder, horrifying violence, and sexual assault that shocked audiences. Now, A Clockwork Orange serves as a brilliant cultural piece — but such wasn’t necessarily the case in 1971.

The Cinemaholic explains one graphic sexual assault scene in particular really turned audiences off to the film.

Next: Did this shocking film really cause someone to die?

Scene from The Passion of the Christ | AMBI Distribution via YouTube

Mel Gibson’s long film recounts the story of Jesus’ death — and he doesn’t shy away from any gory details. There have been multiple reports of audience members getting sick while watching his take on this Biblical tale. And one woman, in particular, died while watching the film, CNN reports.

Peggy Scott, a 56-year-old woman from Kansas, went to a morning show of The Passion of the Christ when she had a heart attack during a climactic moment in the film. Though a nurse tried to help, Scott was pronounced dead at a nearby hospital.

Next: People are still talking about a famous torture scene from this movie.

Kirk Baltz reportedly had a blast on the set of Quentin Tarantino’s Reservoir Dogs, even if he was part of a scene that caused serious outrage amongst movie-goers. This heist drama features Baltz’s character getting his ear sliced off, Daily Mail Online reminds us. And while Baltz can laugh it off now, viewers were totally disturbed at the time.

Variety reports 33 people walked out during one screening due to the brutality. And Tarantino said famous horror director Wes Craven was one of them.

Next: Cinema lovers just couldn’t handle one horrifying scene in this film.

Here’s another shocking film that hit Cannes. Stars you see more often in independent films, such as Charlotte Gainsbourg and Willem Dafoe, star in Antichrist, a shocking film about the guilt that plagues a couple after their child falls out of a window. While many viewed it as a visual masterpiece, others thought much less of it.

The Guardian reports some critics called Antichrist “an abomination” and misogynistic. And there were reports that during the most intense sequence, several folks passed out in their seats.

Next: This ultra-famous movie didn’t always get audience approval.

This Tarantino cult classic is beloved by many serious moviegoers, but like Reservoir Dogs, it also stirred the pot when it first came out. Looper reports audiences even booed the infamous director when he won the Palme d’Or award at the Cannes Film Festival for Pulp Fiction. And that may have been because of the graphic nature of many of the scenes

Entertainment Weekly says the scene where Uma Thurman’s character takes a hypodermic needle to the heart caused one diabetic audience member to pass out. The screening was halted as the woman was helped.

Next: This family-friendly movie now comes with a warning. 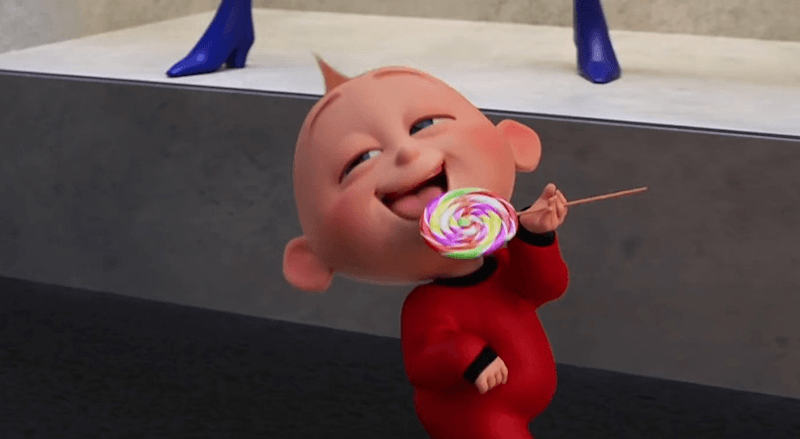 It’s been 14 years since the first Incredibles movie hit theaters, and fans of the first one have anxiously been waiting for the sequel. Now, Disney Pixar lovers finally got their wish — but it could be at the expense of their health.

The Mighty reports many viewers who have trouble with strobe lights are getting sick. For anyone who has epilepsy or deals with migraines or chronic illness, these lights can be particularly problematic. Disney has since asked all theaters showing the film to post a written warning.

Next: Here’s another award-winning film that sickened viewers.

This beautiful film captivated adult and child audiences alike, and it stands as one of the most expensive films ever made, ABC News reports. And while most movie fans had a great experience watching Avatar, it reportedly made many people feel ill due to the 3D effects.

The good news is most viewers were able to handle the 3D experience — even for a movie that ran nearly three hours long. The bad news is others reported feelings of nausea, including one critic who called Avatar “vomit-inducing,” The Guardian reports.

Next: This new horror film made many viewers vomit.

This controversial horror film may have slipped under your radar, but many viewers who did catch it at the Toronto International Film Festival had plenty to say about it. Raw is about a young vegetarian woman who attends veterinary school only to then indulge herself in cannibalism. As you’d expect, it had viewers feeling quite ill.

The Independent reports there were multiple reports of audience members fainting or vomiting while watching Raw. We suggest viewing at your own risk.