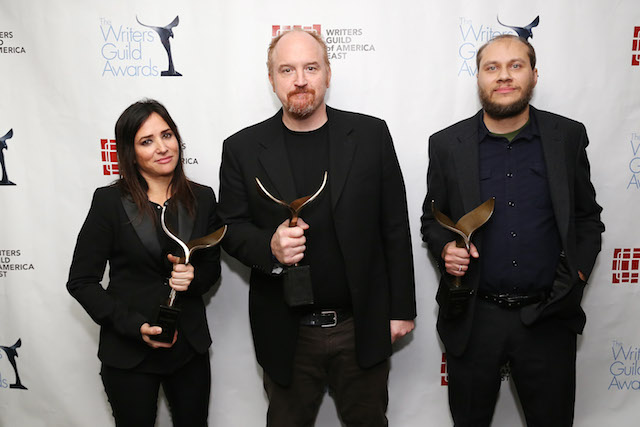 FX has announced a new show from comedian Louis C.K. that breaks up the network’s traditionally testosterone-filled lineup. Created by and starring longtime Louis C.K. collaborator and Californication star Pamela Adlon, FX has given a pilot order to the show Better Things, Deadline reports. The series will focus on a woman raising three daughters on her own, just as Adlon is in real life. The pilot will be written by Adlon and Louis C.K., and Louis C.K. will direct.

Deadline says this will be the first comedy series on FX with a female lead. Given that Adlon is also creating and writing the series about single motherhood, FX seems to have opened up to the idea that a show from a woman’s mind about female issues can be funny. Of course, having Louis C.K.’s name on it helps, as well, due to the success of his sitcom for the network, Louie. Adlon has had a recurring role on Louie as one of Louie’s friends, has written for Louie, and is a producer on the show. Her heavy involvement in one of FX’s most successful shows is likely a reason that the network was willing to take a risk with a new series from her.

Adlon’s creative partnership with Louis C.K. goes back many years. Before working together on Louie, which debuted on FX in 2010 and is considered to be one of the best comedies on television, the pair co-starred on a short-lived HBO sitcom that Louis C.K. created called Lucky Louie. That show aired for one season in 2006 and saw them playing a working-class husband and wife in a traditional sitcom format with raunchier jokes.

Louie’s fourth and most recent season has a 93 Metascore on the review aggregator Metacritic, indicating universal acclaim from critics. The show has won Louis C.K. multiple Emmys for writing, and the comedian was nominated for a Golden Globe this year for best performance by an actor in a television comedy.

Aside from her collaborations with Louis C.K., Adlon is known for co-starring on Californication as the coked-out, foul-mouthed bikini waxer Marcy Runkle. That Showtime series recently wrapped after seven seasons. She’s also done extensive voiceover work on shows like Bob’s Burgers and King of the Hill, the latter of which netted her an Emmy for Outstanding Voice-Over Performance in 2002. Due to her low, raspy voice, she often plays male characters in her voice-over roles.

Fans of Louis C.K. and Louie should look forward to Better Things. Even though Adlon’s acting role on Louie has been fairly small, her overall role in creating the show with Louis C.K. is extensive, and their creative partnership has been long-lasting. Better Things will likely have a lot in common with Louie and Lucky Louie as the two minds come together again.