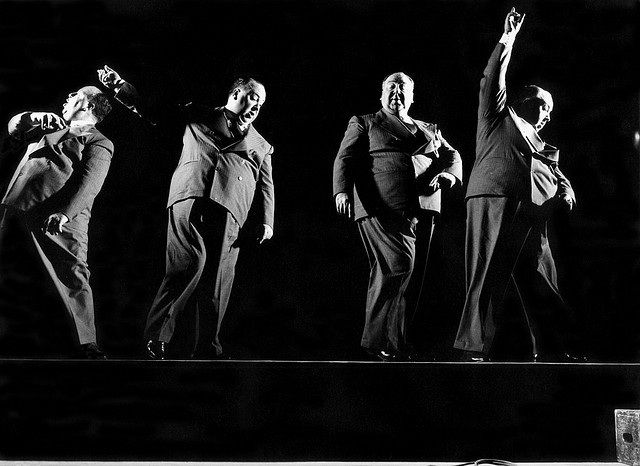 The inimitable Matt Zoller Seitz has a piece in this week’s New York Magazine that discusses the trend of anthology TV, which is currently experiencing a resurgence. Seitz keenly addresses why anthology series work so well in our instant-streaming world, but readers shouldn’t come away thinking that anthology television has always been so successful. It’s had a difficult, often squalid history, and only recently has “anthology” not been analogous to “RIP.”

The anthology television series was, in its original incarnation, basically grandfathered in from radio. Listeners could tune in every week to hear a new standalone story, which was particularly effective with genre shows — weird fiction, science fiction, horror. Television’s embryonic favored high-brow anthology series transcribed the aesthetics of theater to the small, boxy confines of living rooms. NBC’s Kraft Television Theater was the first major anthology series in 1947, offering adaptations of Alice in Wonderland and A Christmas Carol. The Philco Television Playhouse ushered in what’s now (erroneously) considered the first Golden Age of Television — the series is now fondly remembered for Marty, which was turned into an Oscar-winning film two years after its television debut. No one wants to talk about how Marty was a rare highlight during a time when television was stodgy, stuffy, and boring.

TV anthologies hit their stride with the now-iconic Alfred Hitchcock Presents and The Twilight Zone. Both shows dealt in one-hour standalone stories that had no consistent characters or plots, but which were interwoven with recurring themes and aesthetics (murder and morally conscious surrealism, respectively), book-ended by familiar hosts. Alfred Hitchcock, one of the biggest directors in the world, introduced and ended each episode with his distinct English drawl and penchant for puns. (This is right around the time François Truffaut and the Cahiers du Cinéma were reappraising Hitchcock as an auteur, not just a maker of fun escapist flicks.) He only worked on a handful of episodes, including the seminal Roald Dahl adaptions “Lamb to the Slaughter” and “The Man From the South,” but his name (and silhouette) were enough to wrangle and ensnare viewers.

Rod Serling and his beloved twist endings provided a similar thread of familiarity for viewers. Every week, you knew what you were in for: an ominous, yet tranquil-voiced introduction, a story too weird to be mistaken for reality, and an ending you wouldn’t see coming. Once this formula was established, the show had enough going for it to garner a small but dedicated cult following (perhaps the first cult following in television.)

The ’80s saw an attempted resurgence of anthology television, with the talents of no less than George Romero and Steven Spielberg. Romero’s Tales From the Darkside, as well as his anthology film Creepshow, channeled the old pulp comics of Romero’s childhood and played into the idea of anthologies as pulp fiction. The show and films were both moderately successful. Spielberg, however, tried to harness the nostalgic charm that permeates all his great films, and his show ended up slumping hard. Amazing Stories offered amazing flexibility and talent, with the likes of Martin Scorsese, Milton Berle (Mr. Television), Clint Eastwood, and Harvey Keitel all lending their talents to the traditional-style series. But Spielberg didn’t introduce the stories and didn’t personalize anything; viewers came into and left each episode cold. The series was renewed on blind faith, and subsequently ended after a weak two-season run.

The ’90s saw a slight bump for anthologies with HBO’s Tales From the Crypt and the Nick show Are You Afraid of the Dark?, both of which featured regular hosts (the Crypt Keeper for HBO’s ghoulish series, the Midnight Society for Nick’s kid show.) But don’t let ’90s nostalgia cloud reality — the shows had niche audiences. They weren’t monumental hits.

There’s a discernible difference between the anthologies of yesteryear and this current resurgence of anthology television. The first of the new breed, American Horror Story, took a season-by-season approach to the anthology format, and it paid off well. Viewers have an entire season in which to get to know characters and engage with the story. But when the writers killed off virtually the entire cast in the final episode of season one, viewers learned that nothing, and nobody, was protected in an anthology format. Characters don’t have to stick around forever, and writers don’t have to stretch plots thin to cover four seasons.

Besides the duration of its arcs, what sets American Horror Story apart from Amazing Stories is its cast — many of whom come back as different characters for different arcs (Jessica Lange being the most notable.) The aesthetics have been established, and viewers know what kind of show American Horror Story is; what they don’t know from season to season is the characters and what will happen to them.

True Detective takes a similar approach, but cuts the number of episodes down from 13 to 8. Having one singular voice writing the series and one singular eye directing it meant the show had a cohesive, sustained feeling from first episode to last (whereas old anthology series were scatter-shot and scatterbrained.) The show is dark, figuratively — time being a flat circle, women being sacrificed and mounted like Norman Bates’ birds — and literally, with a pallet of blacks and woodland colors comprising the show’s look. A show might have difficulty being this oppressively dark if it had to keep up the routine for 80 episodes (which is why the brilliant Hannibal is brimming with inside jokes for fans of the books and films on which the show is riffing.)

Since they could commit to just one season, big stars like Matthew McConaughey and Woody Harrelson were able to star in a show without putting their film careers on hold. Those stars lend an air of credibility and a heavy dose of charisma to a show that presents no promises for longevity, no promises of who will survive. Enough people tuned in to crash the HBO GO app because no one knew what would happen to Rust and Marty during the final episode.

The newest member of the anthology rebirth is Fargo. It’s in the same vein as True Detective in that it will replace its cast and setting next season. Ostensibly a remake of the Coen Brothers’ modern classic film, the series begins taking detours almost immediately. Martin Freeman (The Hobbit) plays Lester Nygaard, a bumbling insurance salesman who fills in for the William H. Macy character in the Coen’s film. Instead of having his wife kidnapped for the ransom, this Nygaard kills his wife in a fit of anger (which seems out of character for him.) Allison Tolman plays officer Molly Solverson, who takes over for Francis McDorman’s pregnant police officer in the film (Solverson’s character isn’t pregnant, however — an important alteration.) Billy Bob Thornton plays a devilish killer with an idiomatic sense of humor (he has no real equivalent in the film, but he’s the most Coens-like character here.)

Since Fargo is ostensibly a remake, it has a slew of preconceived notions weighing it down from the beginning. But by episode 3, it’s established itself as something else entirely.

Fargo is allegedly going to change its city, cast of characters, and story each season, so we can never be sure who’s gonna die. (Indeed, the first episode kills off someone who seems like a main character, not unlike The Fall.) Tolman’s performance has been justifiably lauded, and the show is gradually developing its look and feel. Fargo is indicative of a new flavor of anthology television, and that’s something we can (and should) all get behind, especially if it means the continued swelling of prodigious talent and quality television.