‘Fear the Walking Dead’: Inside Episode 3

According to Entertainment Weekly, the September 13 episode of Fear the Walking Dead delivered 7.2 million viewers, which is a 12 percent dip from the second episode (“So Close, Yet So Far”). Nevertheless, the spin-off show whose counterpart has obtained something like a cult following, is still finding its sea legs.

This notion runs quite hand-in-hand with the content onscreen as well, as the main characters (which are becoming increasingly ‘fleshed’ out — pun intended) are discovering: themselves, the perilous conditions of Los Angeles, and of course how the infected people might not be carrying the latest stomach bug or salmonella — they’re dead. Nick Clark (Frank Dillane), makes this quite clear in the episode entitled “The Dog.”

With only weeks left until The Walking Dead returns for season six, the hype seems to be sort of channeled over to Fear the Walking Dead, but to assume the spin-off would be as expeditious and raucous, right off the bat, is a fool’s errand. The new show’s fans should not boil down both shows in one pot: Rick and company needed time to get situated in their post-meltdown environment, and thus, Madison Clark and Travis Manawa need some time to become acclimated as well.

The irony in creating another aesthetic jewel for AMC viewers (if you can consider rotting flesh a jewel) is that the same expectations across both shows cannot be met immediately. The lofty, preconceived goals conjured up by fans before the August 23 premiere of FearTWD may in fact still come true (while some critics denounce the show’s current pace), but the matter needs time to develop, to incubate. Let the depravity, the hopelessness settle. Plus, imagine a 15 episode second season — the possibilities are limitless.

Anyway, let us retrace our steps a bit, abandoning this prescriptive tone; that’s because, episode three, “The Dog,” had plenty of enthralling moments. 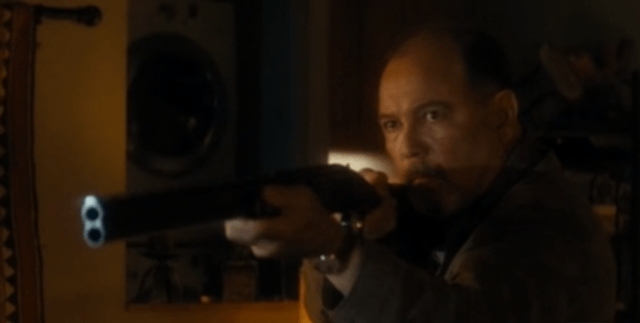 In “The Dog,” both ‘gangs,’ if you will — Travis and company, along with Madison and her kids back at home — start off gauging the situation. Travis wonders if he and his family (Liza Ortiz, played by Elizabeth Rodriguez, and Chris Manawa, played by Lorenzo James Henrie), along with the Salazars, will be able to stick it out in Daniel Salazar’s barber shop (Daniel is played by Ruben Blades).

Back at Madison’s suburban house, Nick is beginning to go into withdrawal again when his mother provides him with some prescription pills — the same ones she stole from her school’s locker. Nick, Alicia (Alycia Debnam-Carey) and Madison then play Monopoly to pass the time as they wait for Travis to return so they can skip town.

Back at the barber shop, all is lost as the wooden walls of the all-purpose shop begin to melt, and people begin to push on the entrance gate. Travis and family, along with the Salazars, then abandon the shop and make a break for the road. The goal: to return to Travis’ truck, which by some miracle, was not even touched by the myriad of rioters that littered the streets. On the journey over, Daniel’s wife, Griselda (Patricia Reyes Spindola) has her foot crushed by a fallen sign. The gang, however, makes it out of the anarchic city and back to Madison’s.

Before the Manawas and Salazars enter the house, viewers witness one of the most suspenseful moments of series thus far: A zombie, who was their neighbor Peter, enters the house and eats the German shepherd that sought refuge there. Madison, Nick and Alicia had went to their neighbor’s house to retrieve a shotgun, but Alicia is nearly trapped there after she is forced to return to get more bullets.

As the Manawa and Salazar clans enter the house, Peter is ready to go on a bloody rampage, but trusty barber Daniel Salazar saves the day by shooting Peter in the face (twice).

A sort of bickering then ensues between Travis and Daniel, who as patriarchs, debate what to do with their families, and fuss over whether one is beholden to the other. Ultimately, Daniel decides to stay at Madison’s house after the Clarks/Manawas leave, so that Griselda can heal. However, in her first shining moment on the show, Ofelia Salazar (Mercedes Mason) stands up for herself, and for her mother, by using her bilingual skills to confront her father’s authoritativeness.

Ofelia, who seems to be a pleasant character, wants to stick with the Manawas and the Clarks, but it does not seem as though she would get her way, until the episode’s denouement that is — the military comes to shoot Madison’s neighbor (Susan) and they remove the neighbor’s husband (Patrick) to an undisclosed location.

At this point — a bloody crossroads for FearTWD characters — the Salazars, Manawas, and Clarks reconnect. As Salazar points out at the episode’s end: It’s simply too late (to rediscover normalcy that is).

Catch the next episode of Fear the Walking Dead on September 20 at 9 p.m. on AMC.