‘Fear the Walking Dead’: Inside Episode 5

Another week, and another episode of Fear the Walking Dead has elapsed. The latest one, entitled “Cobalt,” brought viewers one step closer to the (now) anticipated season finale. While “Cobalt” felt similar in pacing and rate of revelation to the initial four episodes, it did stand out in that viewers now have something to focus on: a deadline of sorts. “Operation Cobalt” is set to take place in the next episode and will be the “humane extermination” of those left behind or simply, those in the L.A. area. The minor details are ambiguous right now, for what we know comes from “extracted” information that Daniel Salazar (Ruben Blades) lifts from Cpl. Andrew Adams (Shawn Hatosy), who is kidnapped early in the episode.

All of that is to say that with this deadline, finally there is a narrative wedge thrown into the mix that can keep viewers tagging along. It’s been mentioned in previous posts that there was a lack of cohesiveness thus far, or an event, emergence of a new character, etc., that could condense an ever-widening plot.

At last, heading into the season finale, viewers are left (cleverly) suspended, waiting for answers — and these answers need to come on a few different fronts. That’s not to say that “Cobalt” is too disparate or frenetic, but what is occurring, at present, is a firm development of the show’s emerging characters. By episode five, fans of the show can be empathetic towards a host of people: Madison and Travis, Chris and Alicia, Ophelia, Daniel, and a few others (even Cpl. Adams).

The strongest attributes of the fifth episode are the following: Director Kari Skogland’s ability to both paint the backdrop of the dissolving L.A. scene and bring viewers close to the show’s most prominent figures, Madison and Travis. Further, What Skogland and episode writer David Wiener do effectively is sort of drive the show through a strainer: The Army folks are thinned out, Griselda succumbs to her injuries, and Operation Cobalt is elucidated. (Plus, an intriguing new character with a natural gift in Darwinist theory, Strand (Colman Domingo), is introduced.)

Considering plot, “Cobalt” is busier than its predecessors. The episode begins in the medical compound that some FearTWD characters were ushered off to last episode. Here, Strand (Domingo) plays a vicious psychological game with one of the detainees — the same man who was driven out of the safe zone because of his anxiety. When guards come to remove him, Strand then focuses his attention on another visitor in the holding cell: Nick Clark.

Strand reveals himself to be an impeccable salesman, and seems to draw Nick close, with an ulterior motive in mind. Then, viewers encounter Ophelia (Mercedes Mason) once again, but this time throwing materials at the fence the Army had set up in the neighborhood. Before she is “taken care of” by the hotheads in charge, Cpl. Adams (Hatosy) volunteers to calm down Ms. Salazar — seeing as he’d already been romantically linked to her.

As it turns out, Ophelia lures Adams back to the house where her father, Daniel (Blades), kidnaps him and ties him up in the basement for interrogation. Unfortunately for Adams, Salazar does not appear to be in a merciful mood, for he gathers up and unfolds a pouch full of blades he can use for torture. Adams, of course, begins to stir.

For the Clarks, Madison begins to question Daniel, wondering why he has to resort to such harsh measures. Then, however, recognizing the coldness that’s truly emerged in this apocalyptic world, she allows Salazar to continue the torturing.

Travis, asking the Army men for his ex-wife and Nick, is ushered off in a Humvee with the soldiers, who assure him that he can view the medical compound. Unfortunately, they stop for a detour (to eradicate one of the zombies), but then respond to another call and find themselves in a bind outside an abandoned building. Nervous and fidgety, Travis explores his options for escape before a few of the soldiers return. 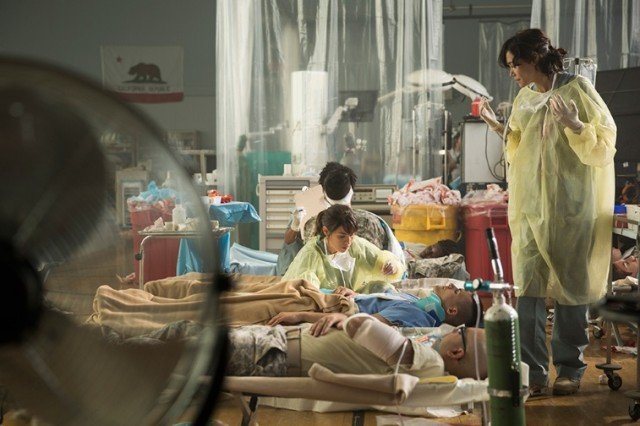 Speaking of the medical compound, though, viewers do in fact get to witness this place some more. It is here, where Dr. Bethany Exner (Sandrine Holt) teaches Liza Ortiz (Elizabeth Rodriguez) about the protocol the medical professionals (or amateurs) are observing. Still suspicious of Exner, Liza attempts to visit Griselda, who has had her foot amputated. Exner informs her that Griselda has gone into septic shock and will surely not survive the night.

Shortly thereafter, Griselda succumbs to her injury and loses her life but, in a last desperate attempt to see clearly, describes the devil before her, who’s been stalking her since her youth. After she passes, Liza prevents Griselda’s rise from the dead by shooting her with a bolt-gun; Exner reveals that traumatic brain injury is the only way to prevent it.

Back at the Clark/Manawa neighborhood, Salazar continues to torture Adams, where he then learns about Operation Cobalt. Adams spills the beans, informing the ex-barber (and something more!) that the Army plans to leave the immediate area as soon as possible and, in their wake, will “humanely” exterminate the remaining survivors. It is here where the show begins to abandon its uneasy, wobbly tiptoe and find its footing.

Nick Clark also learns that Strand (who saves him from being escorted out by soldiers) has something planned for when the Army leaves since he holds a key of some sort.

With viewers having something to look ahead toward, the drama is unearthing itself one fine detail at a time. One of the superfluous portions of “Cobalt” finds Alicia and Chris Manawa entering a nearby mansion to break the former occupants’ belongings and try on their clothes.

Looking ahead, though, the path seems a bit clearer for Fear the Walking Dead. Although it took nearly five episodes to get to this point of solidity, the fact is that the threshold has been crossed. It wouldn’t be surprising if the ratings improve for the season finale this Sunday.

Catch the finale on AMC on Sunday, October 4 at 9 p.m.