‘Fear the Walking Dead’: Inside the Exciting Season Finale

What was not to like about the season finale (“The Good Man”) of Fear the Walking Dead? There’s been criticisms of the show all year — too much exposition, too much of a turn toward family drama. The finale, however, is a sharply made, fast-paced episode far from the norm viewers have come to expect.

While there were plenty of moments earlier on in the season that impressed: Daniel’s abduction of Cpl. Andrew Adams, the sudden intervention of the military near Madison’s house, even the initial chaos on the LA streets. Yet, it is true, there were dull moments and points where there was a slight disconnect between show and viewer. The purpose of this long-winded appraisal of the season up until “The Good Man” here, is to establish the scene, only to shatter it, along with expectations.

Chances are, if you are a Walking Dead fan and were anticipating the spin-off, you knew there was no way creators Robert Kirkman and Dave Erickson were going to let the season progress too far before bringing out the Katana, or letting bullets fly or zombie heads roll. You, dear fan, were correct. The finale was expeditious, gritty, and murderous. In other words, perfect for the zombie genre. (Let us just say, Frank Darabront would be proud.)

Not only is there movement — an escape from the cramped neighborhood — and resolution to the abduction, an anecdotal portion of the season, but a chain of command, or at least the semblance of one, is created within the group. There is a hierarchy established, especially pertaining to Travis and “Strand” (Colman Domingo), who may be viewed as the fearless leaders now. The interesting facet of this dynamic is that Strand is the antithesis of Travis: one moral and at times passive, the other narcissistic and brazen.

Whether you are a fan of the apocalyptic genre or not, Fear the Walking Dead has ran the gamut this year, transitioning from family drama, to medical drama, to an evolving, en voyage tale of survival. By episode six, the groundwork is laid, the “infection” is fleshed out, and the characters have developed a rapport and grown immensely.

Alicia is no longer the flighty teen she appeared to be at points; Travis has embraced his inner Rick Grimes; Madison is hardened by the torturing; Chris can be in the same room as his father again; and Nick appears to be weaning himself off the “stuff.” He provides what could perhaps be the line of the night, saying he’s been living in this off-kilter world for a while now, and now everyone is just catching up. 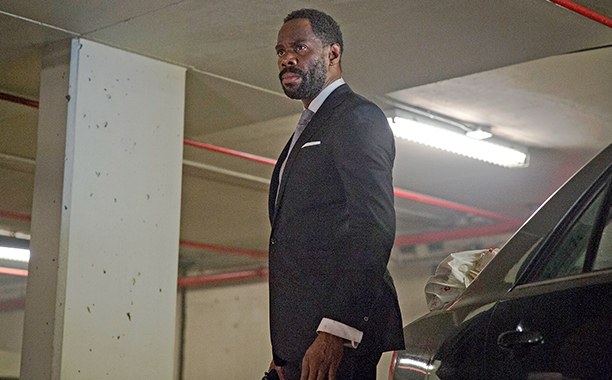 The episode begins as the group prepares to leave the neighborhood because of “Operation Cobalt.” While stuffing their belongings into the vehicles, Travis recognizes the savagery in Daniel Salazar’s intentions, and so frees Cpl. Adams (Shawn Hatosy). When Adams doesn’t appear for the roll call, Salazar expresses his contempt, saying these sorts of miscalculations always come back to haunt you.

Next, our cohesive group then takes to the road — to the National Guard headquarters — to recover Nick and Griselda (if they only knew). In another potent moment from the episode, Salazar then approaches the army’s lookout, and warns the soldiers not to shoot. “You should save your ammunition,” he says casually, before moseying off toward the facility. As it turns out, he is leading an army of zombies (presumably the ones he has freed from the arena Adams mentioned in episode five) toward the grounds. Now, it’s every man for himself.

On the inside of this caged compound, Nick and Strand are shimmying themselves out, little by little. Strand holds a key and unlocks his holding cell; then he and Nick escape, ignoring the others who are helplessly awaiting rescue, or death.

By this point the zombies have infiltrated the National Guard compound, once considered a refuge. They quickly find themselves on Nick and Strand’s tail, hoping the two escapees make for a well-rounded supper. Only feet away, Travis frees the detainees that Strand so easily ignored. Then, just in the nick of time (customary of the small screen), Madison, Travis, Salazar, and company rescue the men, freeing them from a locked hall.

Then, the gang is en route, poised to escape to Strand’s oceanfront home. Before they can reach the outside world, however, they discover Dr. Exner (Sandrine Holt), who feels helpless at not being able to save the patients in her care. The core FearTWD characters then pass right through, leaving Exner behind to deal with herself as she may. (She’s holding a bolt-gun…) 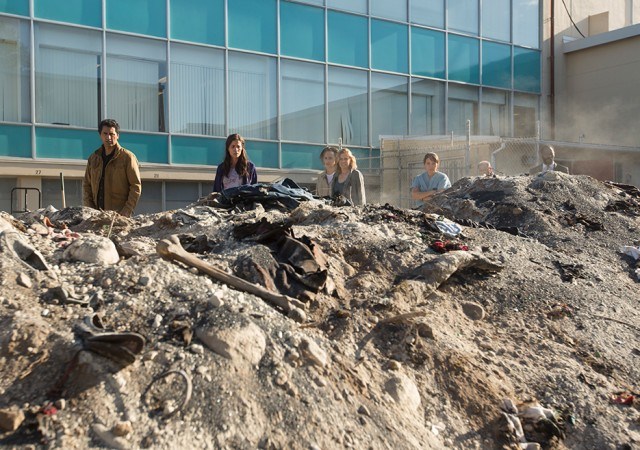 In another setback before reaching some fresh air, the group encounters Cpl. Adams again; this time he points a gun at Salazar, corroborating his earlier bit of wisdom. Ophelia will not allow her father to die in front of her, and goes to stand in front of Adams. Before she can get there, the crazed Army man shoots her in the arm. Cliff, abandoning all reservations he’s held for the first five episodes, leaps on the soldier and beats his face into hamburger meat.

At long last, the gang reaches the streets of LA, and are headed toward Strand’s place when they see columns of abandoned cars on the city’s main freeways. When they arrive to Strand’s, the sharply-dressed man informs Nick that Abigail will save them all. Who? Well, not who, but what. Abigail is his anchored yacht. In a neat, inventive twist, it appears like the cast will be sea-bound next season (which will be 15 episodes). Everything is not as light and flowery as it might appear, though, because it is then revealed that Liza has been bitten.

The season closes in an emotional scene where Liza pleads with Madison to kill her before Travis feels he must. But then, her ex-husband does in fact come along and pull the trigger.

Needless to say, the stage is set, the zombies are swelling the streets, and the characters are entrenched for the long haul.

Look out for Fear the Walking Dead when it returns next year. In the meantime, be sure to catch the season premiere of The Walking Dead on AMC on October 11. The premiere is directed by Greg Nicotero.