‘Fear the Walking Dead’: The Magic Missing From This Show

Spoilers for the second season of Fear the Walking Dead ahead!

Travis and Salazar on the Abigail | Source: AMC

Some television series grab us from the very first moment and never let go. Others stun us with their opening sequences, but can’t keep our attention in the long run. Unfortunately for fans of The Walking Dead, its spin-off, Fear the Walking Dead has mostly fallen into the latter category. The series follows a group of Los Angeles residents as the city and its surrounding areas rapidly succumb to the walker apocalypse. And it distinguishes itself from its predecessor because we get to experience the breakdown of society along with the series’ characters, instead of seeing the immediate aftermath through their eyes.

It’s an intriguing premise — one with plenty of potential for success, especially given the TWD universe’s built-in fanbase. But despite an impressive cast of film and television veterans, some interesting characters, and positive reviews for it’s first season, Fear The Walking Dead has become — for many fans — a bit of a chore to watch.

It’s not that the AMC horror-drama is an out-and-out failure. Fear the Walking Dead continues to pull in a relatively large audience. And many critics have offered positive reviews — or at the very least faint praise — for its second season. It was even recently renewed for a third season.

But none of these promising signals change the fact that there’s a large enthusiasm gap where Fear the Walking Dead is concerned. With just a handful of episodes under it’s belt, it’s transformed from a series that viewers eagerly anticipated to one that we often merely tolerate because we feel like we should be watching it. And the lack of excitement is due, in large part, to the way the series’ main stories are unfolding.

Some of the most memorable moments in The Walking Dead have occurred as the series’ weary survivors have figured out their way out of life-and-death situations. It was exciting to watch Rick and Glenn realize they could escape a horde of walkers if they covered themselves in bloody human remains.

When the survivors on Fear the Walking Dead figured the same thing out, three episodes into it’s second season, it was decidedly less thrilling. Because while it may have been a nice wink-and-nod to devoted fans, it was something we’ve already seen on multiple occasions.

A series like Fear the Walking Dead — one that builds interest by promising to examine a familiar scenario through an entirely different lens — will live and die on its ability to creatively reinterpret old themes. And Fear the Walking Dead simply hasn’t done much of that to date. Instead, it’s become tedious on more than one occasion to watch a whole new group of people discover the basic tenants we all know to be true in the Walking Dead universe. 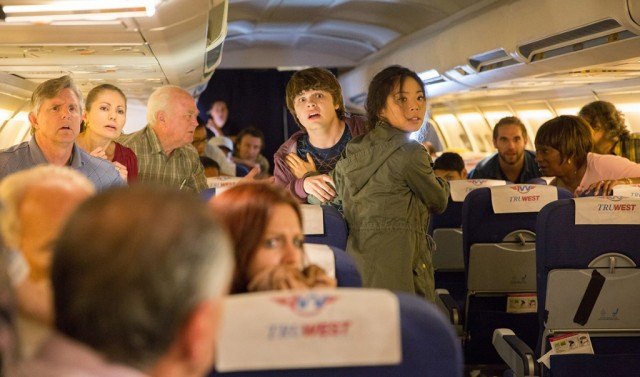 A scene from Fear the Walking Dead: Flight 462 | Source: AMC

This season, Fear the Walking Dead‘s creators have tried their hardest to differentiate it from The Walking Dead. By putting the series’ protagonists on a boat in the middle of the ocean and trying to integrate the spinoff’s spinoff, Fear the Walking Dead: Flight 462 into its main storyline, the series has certainly broken new ground as far as exploring Robert Kirkman’s apocalyptic landscape.

The problem is that a change of scenery and some crossover appeal isn’t enough to make a series compelling. Yes, there have been some memorable moments for Madison (Kim Dickens), Strand (Colman Domingo), Alicia (Alycia Debman-Clarke), and the rest of Fear TWD‘s survivors — from encountering potential allies via the Abigail‘s CB radio to butting heads about whether or not they can take on any more passengers. But the series still suffers from one essential but crucial flaw: It’s failed to build its frequent moments of tension into any serious, long-lasting momentum.

Part of the problem is the ensemble of characters. Some, like Madison, her pacifistic fiance Travis (Cliff Curtis), and her recovering addict son Nick (Frank Dillane) are easy to get invested in. Some, like the Flight 462 survivors or the Jamestown-esque family that the Abigail passengers encountered early in the second season, seemed like potentially fascinating additions to the story. But unfortunately, they were disposed of almost as quickly as they were introduced.

In contrast, other characters — like brooding teen Chris (Lorenzo James Henrie) and self-absorbed Ofelia (Mercedes Mason) — are mostly intolerable. And with a limited cast of characters to become invested in, having more than one grating protagonist isn’t the best way to keep viewers invested in the series’ outcome.

But the biggest issue that Fear the Walking Dead faces — and the one it has yet to address head on — is the fact that, despite its West Coast setting and aquatic locations, it’s more or less telling us the same story as The Walking Dead. Not just in terms of easter egg-esque discoveries that the characters make along the way. But in a bigger picture endgame sense, it’s venturing in the same basic direction as its companion series — only it feels like it’s lagging far behind.

We know from The Walking Dead that months, even years out from where the characters are now, survivors are still waging battles and struggling to rebuild any semblance of society. It’s possible that Fear the Walking Dead can give us a compelling reason to watch yet another band of survivors in a walker-infested world — like new information about why the epidemic began, or some sense that life is better somewhere else in the world. But if it can’t, and we’re left with a group of characters we don’t love rehashing lessons we’ve already learned, Fear will never capture the magic of AMC’s The Walking Dead.