7 of the Greatest Rock and Roll Documentaries of All Time

Music is just a tiny part of what makes a great rock and roll documentary. The films on this list also contain intimate interviews, rare concert footage, and research into the social and political landscapes that have influenced some of the greatest musicians, bands, and musical movements in history. Here’s a list of some of the greatest rock and roll documentaries ever made.

While it’s another Dylan doc that frequently tops the rock and roll documentary lists (Martin Scorsese’s No Direction Home), D.A. Pennebaker’s 1967 film covers a pivotal moment in Dylan’s career: his switch from folksy protest singer to brooding rock and roll poet. Dylan screws with journalists at press conferences, scoffs at fans that just don’t get where he’s going, and duets with Joan Baez as their relationship is on the verge of collapse.

While it’s another Dylan doc that frequently tops the rock and roll documentary lists (Martin Scorsese’s No Direction Home), D.A. Pennebaker’s 1967 film covers a pivotal moment in Dylan’s career: his switch from folksy protest singer to brooding rock and roll poet. Dylan screws with journalists at press conferences, scoffs at fans that just don’t get where he’s going, and duets with Joan Baez as their relationship is on the verge of collapse.

This is the most intimate glimpse into Dylan’s personal life that he would ever allow the world to see. He fights with Baez, fights with journalists, fights with his entourage, fights with other musicians, and when not fighting, spends his time hammering away at a typewriter. “Dont Look Back is really about fame and how it menaces art, about the press and how it categorizes, bowdlerizes, sterilizes, universalizes or conventionalizes an original like Dylan into something it can dimly understand,” said a 1967 Newsweek review. Lastly, it contains what is thought by some to be the first ever music video, footage of Dylan holding up and dropping cards with the lyrics of “Subterranean Homesick Blues.”

Scorsese is not just a master of the gangster movie but also the rock and roll documentary. Several of Scorsese’s films could have made it on this list, but the most famous of his rock documentaries is The Last Waltz, which documents the final performance of the Band and includes appearances from Emmylou Harris, Bob Dylan, Ringo Starr, Joni Mitchell, Van Morrison, and Eric Clapton, among others.

The farewell concert was held on Thanksgiving Day 1976. Concert footage is broken up with interviews between band members Levon Helm, Rick Danko, Richard Manuel, and Robbie Robertson with Scorsese. While the movie has been criticized for focusing too heavily on Robertson, seeing the hugely talented multi-instrumentalist members of the Band perform with such a legendary cast of musicians makes the film a treasure. It’s considered by many to be the best rock and roll film ever made.

This documentary shows what happens when you take three guitar gods with very distinct styles spanning generations and throw them into a room together. Jimmy Page of Led Zeppelin, the Edge from U2, and Jack White of the White Stripes/Raconteurs/Dead Weather each describe the events in their lives that lead to them picking up the guitar and developing their unique styles.

White wins for being the most entertaining character in the film. His storytelling is perforated with Dylan-esque exaggerations and lies (including an appearance from a kid labeled as the 10-year-old Jack, who’s eventually put in a suitcase and thrown in the trunk of Jack’s car). Page and the Edge are more straightforward in recounting their early years, but the best parts of the movie are when the three titans jam together on tracks like the Stripes’ “Dead Leaves and the Dirty Ground” and “The Weight.”

4. The Filth and the Fury 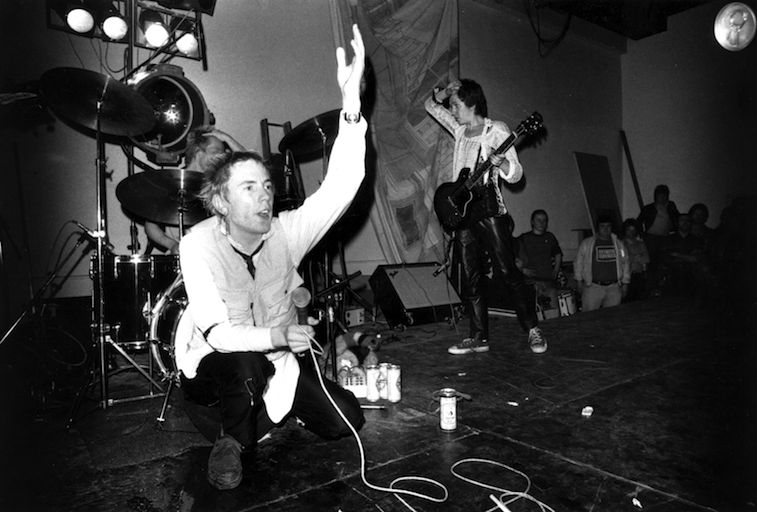 This chronicle of the Sex Pistols’ rise to fame and rapid decline is also an all-encompassing view on the social and political causes of unrest in England’s lower classes during the 1970s that led to the punk rock movement. Extensive interviews with Johnny Rotten, Malcolm McLaren, and Steve Jones are interspersed with rare footage of the Pistols, the sex shop where they met and English punk got its start, and heartbreaking clips of strung-out Sid and Nancy.

There’s footage of the band’s attempt to crash the Queen’s Jubilee, footage of the band’s notorious television appearance in which Jones called Bill Grundy a “dirty f–ker,” and footage of their disastrous American tour that ended with Rotten sneering “Ever have the feeling you’ve been cheated?” and stalking offstage, ending the band’s 26-month career. The title of the film comes from one of the many venomous headlines that turned the group’s members into the most hated people in Britain. Directed by Julien Temple, the movie is one of the best depictions of the social conditions leading to a musical movement ever made. It’s a must for anyone interested in punk rock or music’s ability to affect change.

This documentary of the Rolling Stones’ infamous 1969 performance at Altamont is like a film version of the writings of Hunter S. Thompson: a brutal chronicle of the violent end to the peaceful counterculture of the 1960s. Filmmakers the Maysles brothers followed the Stones on their 1969 U.S. tour, which culminated in a free concert the band gave at Altamont as a way to thank their fans. Security for the event, which drew a crowd of 300,000, was taken care of by the violent biker gang the Hell’s Angels.

The crowd at the concert grew increasingly unruly throughout the evening, and by the time the Stones took the stage, things were starting to get out of hand. Eighteen-year-old fan Meredith Hunter attempted to jump onstage, drew a gun, and was stabbed and killed by the Hell’s Angels. His death was caught on film. Three other accidental deaths also occurred around the concert, which was hoped to be a West Coast version of Woodstock. Instead, it now stands as a symbolic end to the 1960s.

6. The Decline of Western Civilization

Penelope Spheeris, who is frequently called a rock and roll anthropologist, directed a series of three films about Los Angeles called The Decline of Western Civilization. The first installment is about the L.A. punk scene of the late 1970s. Through interviews with musicians, fans, fanzine makers, and footage of performances, Spheeris documents the punk subculture of L.A. that at the time was widely overlooked by music journalists. Bands like X, the Circle Jerks, Black Flag, and Germs are featured in the film.

Part two of the series chronicles the excesses of heavy metal scene in L.A. 10 years later and includes interviews with Ozzy Osborne, Paul Stanley of KISS, and Aerosmith’s Steven Tyler. A VH1 documentary called Heavy: The Story of Metal credited Spheeris’s film with ending the heavy metal movement of the 1980s, as people were disgusted by the drugged-out interviews with metal’s biggest stars. The third installment in the series is about L.A. homeless gutter punks in the late 1990s.

7. This Is Spinal Tap

Yes, this is a mockumentary, but one that comes terrifyingly close to the truth, and it is considered to be one of the funniest movies of all time. Spinal Tap is a fictional metal band comprised of comedians Michael McKean, Harry Shearer, and Christopher Guest. The film, directed by Rob Reiner, uses the group to satirize the egotistical, pretentious party animals that were rock’s biggest stars and the rockumentary form as a whole.

Everyone has their own favorite moment in the film, whether it be the too-small Stonehenge replica, the amps that go “to 11,” the manipulative girlfriend, or the series of bizarre deaths that befall the group’s drummers. Many famous musicians are rumored to have said that they identify with the movie, which reminded them of their own bizarre experiences. Jimmy Page, Robert Plant, and Ozzy Osborne, among others have admitted to getting lost while trying to go onstage in huge arenas.

There are several stories about Spinal Tap being viewed by rock and roll stars who failed to understand the movie’s humor, including Steven Tyler and Eddie Van Halen. This movie hilariously smashes the godly aura surrounding the world’s biggest rock stars without ever even naming them.