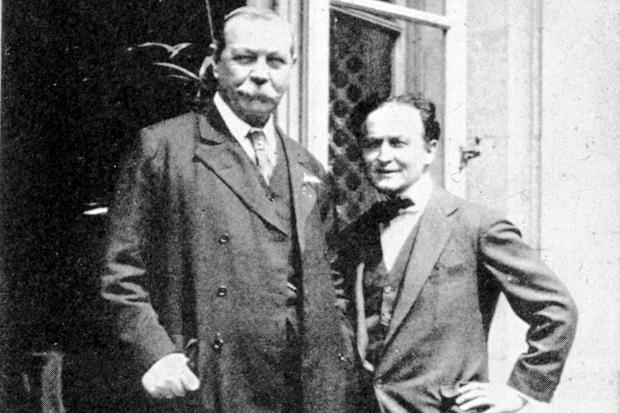 Hollywood has always loved the buddy cop formula: Starsky & Hutch, Lethal Weapon, the latter day works of Jackie Chan, the list goes on. This naturally has led to some odder pairings as the industry has run out of combinations of people to throw together. Fox is no stranger to this strategy, airing shows like Sleepy Hollow, following the world-saving hijinks of a time traveling Ichabod Crane and a modern police lieutenant. Their next foray into the buddy genre though might be their craziest one yet.

The upcoming show is called Houdini and Doyle, and it’s exactly what you think it is: Harry Houdini and Sir Arthur Conan Doyle will be traipsing around the Victorian era together solving crimes of a “supernatural” nature. It seems to be one of those “it’s so crazy it might just be good” ideas, and the fact that the two men were in fact familiar with each other during their lifetimes certainly lends some credence to the show’s viability.

It’s not immediately clear if the show’s supernatural elements will be more Scooby Doo than actual ghosts, but either way it’s a premise with tons of potential. On one hand Harry Houdini, despite being one of the greatest magicians the world has ever known, devoted his life to debunking all manner of psychics, ghosts, and everything between. On the other is Arthur Conan Doyle who, despite being the creator of the most logic-minded character in all of literature, was in fact an avid believer in all things supernatural.

Adding to the buddy cop motif, Deadline notes that the two men’s vastly different upbringings will play into their relationship heavily. Doyle was raised in affluence in Scotland, while Houdini was brought up as a Hungarian immigrant. Together, these two men who in real life couldn’t be any more different, will team up to solve crimes of some sort, likely with some sort of witty banter between them. The story will likely begin with them immediately disliking each other, only to slowly warm to the point where they become begrudging yet inseparable best friends. It’s strange putting the cliché story into two of history’s greatest men, yet here are. What a time to be alive.

Fox will apparently lean hard into the differences of the two men, with Deadline describing them as “the original odd couple, with Houdini believing in nothing, Doyle in everything.” Hollywood doesn’t feature nearly enough depictions of either man, but this really tests our faith in network television’s ability to nail down historical fiction. The worst case scenario is that the show tanks during its 10-episode order, forever sullying the memory of two prolific figures in history. The best case is a show akin to Sleepy Hollow, carefully walking the line between campy and genuine.

We’ll have more information on the series as it trickles out, but the basic idea strikes us as equally absurd as it is amazing. Get a competent group of creative minds together on this project, and Fox may have its next big hit show. Even so, there are a whole mess of way this could go horribly wrong. Don’t do us wrong, Hollywood. The world needs a good Houdini/Doyle buddy story.