From Scientology Connections to an Open Marriage: Surprising Things About Will Smith and Jada Pinkett Smith

Will Smith and Jada Pinkett Smith were married in 1997 and have one of the longest-lasting marriages in Hollywood, yet there is so much we don’t know about their relationship.

We’ve all heard the open marriage and Scientology rumors, but there are some other surprising, and downright shocking, things you may not have known about this power couple. Here, we compiled some secrets you probably never knew about the pair and their family. (They seem like a happy couple, so page 9 might surprise you.)

The couple has an open marriage

Cheating rumors swirled for years, and then came the reports that the Smiths have an open marriage. Pinkett Smith addressed these claims multiple times, and in 2015, she told Howard Stern this about her husband: “I’m not his watcher. He’s a grown man. Here’s what I trust — I trust that the man that Will is, is the man of integrity. So, he’s got all the freedom in the world. As long as Will can look himself in the mirror and be okay, I’m good.”

In 2017, the actress had this to say about reports that she and her man are swingers, “People have to be married in a way that works. As couples, we really do have to see what is best for us.”

Next: Another star tried to out them for this.

Will and Jada Pinkett-Smith have been linked to Scientology. | Harrison/Getty Images

While a lot of celebrities are admitted Scientologists, the Smiths aren’t those celebrities. However, former Scientologist Leah Remini, who is now a crusader against the religion and its practices, stated that she knows they are.

The Kevin Can Wait actress wrote in her book, Troublemaker, that she saw Pinkett Smith at Hollywood’s Scientology Celebrity Centre “all the time.” The Girls Trip star fired back on social media to say that she has studied Scientology, but is not a Scientologist.

Other things that have tied the Smiths to the religion is that they reportedly donated funds to several Scientology causes including the World Literacy Crusade, ABLE International, and the Hollywood Education and Literacy Program. They even put up $1 million to open a private school called New Village Academy. The school, which shuttered in 2013, was said to use the same teaching methods as the Scientology curriculum.

Next: Their family was investigated because of a racy photo.

The Smiths were investigated by child services

Willow Smith was just 13 years old when the controversial photo made its rounds. | Mandel Ngan/AFP/Getty Images

In 2014, a controversial picture of the couple’s then-13-year-old daughter, Willow, in bed with shirtless then-20-year-old Moisés Arias surfaced, The Los Angeles Department of Children and Family Services stepped in and launched an investigation.

The family cooperated fully with authorities, and Pinkett Smith later told TMZ that she had no issue with the photo.

“Here’s the deal,” she said. “There was nothing sexual about that picture or that situation. You guys are projecting your trash onto it and you’re acting like covert pedophiles, and that’s not cool.”

Next: In Hollywood, rumors fly.

There are always rumors

Pinkett Smith pointed out on Atlanta’s Q100 that there are always rumors swirling about her marriage. That seems to be part of being a Hollywood couple.

When asked what sort of rumors there are, she said, “I’ve heard all the things — their marriage is not real, he’s gay, she’s gay, they swing. But at the end of the day, people have to believe what they have to believe. I’ll tell you what, it’s too hard to be in a pretend marriage. Life’s too short for that one.”

Next: The couple does not believe in doing this to their kids.

They do not discipline their children 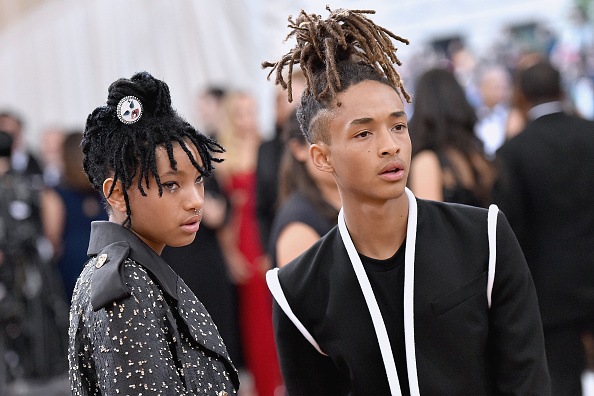 A unique approach to parenting. | Mike Coppola/Getty Images for People.com

Speaking of their children, something the couple does not believe in is disciplining them. Smith spoke about the pair’s unique approach to parenting during an interview with E! News in 2013.

We don’t do punishment. The way that we deal with our kids is, they are responsible for their lives. Our concept is, as young as possible, give them as much control over their lives as possible and the concept of punishment, our experience has been — it has a little too much of a negative quality. So when they do things — and you know, Jaden, he’s done things — you can do anything you want as long as you can explain to me why that was the right thing to do for your life.

Next: A show about parenting

Jada started a show about parenting

The Smith parenting style has received some attention over the years. Perhaps as a result, Pinkett Smith has launched a new program, called Red Table Talk. The goal is to bring together three generations — Pinkett Smith, Willow Smith, and Pinkett Smith’s mother, Adrienne Banfield-Norris — to discuss parenting and their lives. The show is fairly personal, even filmed inside their home.

Next: Will Smith can’t bear to watch this.

The actor can’t watch The Fresh Prince of Bel-Air

Something very surprising is that the Fresh Prince himself “can’t bear to watch” an episode of The Fresh Prince of Bel-Air. You would think that the beloved sitcom would have a special place in his heart, considering it’s where he got his start in acting and where he met his wife.

During an appearance on The Graham Norton Show in 2017, Smith revealed that the reason he won’t watch the show is because of how bad he thought his acting was back then. “It was my very first role, and I was very, very focused on being successful, so I learned the whole script and everyone else’s lines,” he explained. “If you watch the first four or five episodes, you can see I’m mouthing other people’s lines. It’s terrible and I can’t bear to watch it.

Next: This is why all of his possessions were taken away.

The IRS once seized the actor’s possessions

Will Smith in The Fresh Prince of Bel-Air | NBC

Before his sitcom, Smith found fame as a rapper with hits that included “Parents Just Don’t Understand.” But when the IRS came after him for back taxes, he didn’t have the money. Around that same time, NBC executives approached him about doing The Fresh Prince of Bel Air, and the actor signed on, mainly because he needed the money.

Since he neglected to pay $2.8 million in taxes, the IRS ended up seizing his assets and took over 70% of what he earned during the first few seasons of the show.

Next: The couple had trouble in their marriage, so they did this.

The couple went to marriage counseling

They work hard at their marriage. | Adrian Sanchez-Gonzalez/AFP/Getty Images

The actors have admitted that they attended marriage counseling to work through some problems in their relationship.

In 2016, the Suicide Squad star spoke candidly about how the couples therapy saved their marriage.

I’ve done a lot of marriage counseling. What happens in a marriage once you do counseling, the truth comes out. And you sit across from your wife and you’ve said all of your truth and she has said all of her truth. You look at each other and you can’t imagine you could ever possibly love each other again now the truth is out … I think that’s the cleansing before you get to the other side that is understanding and moving forward in our relationship.