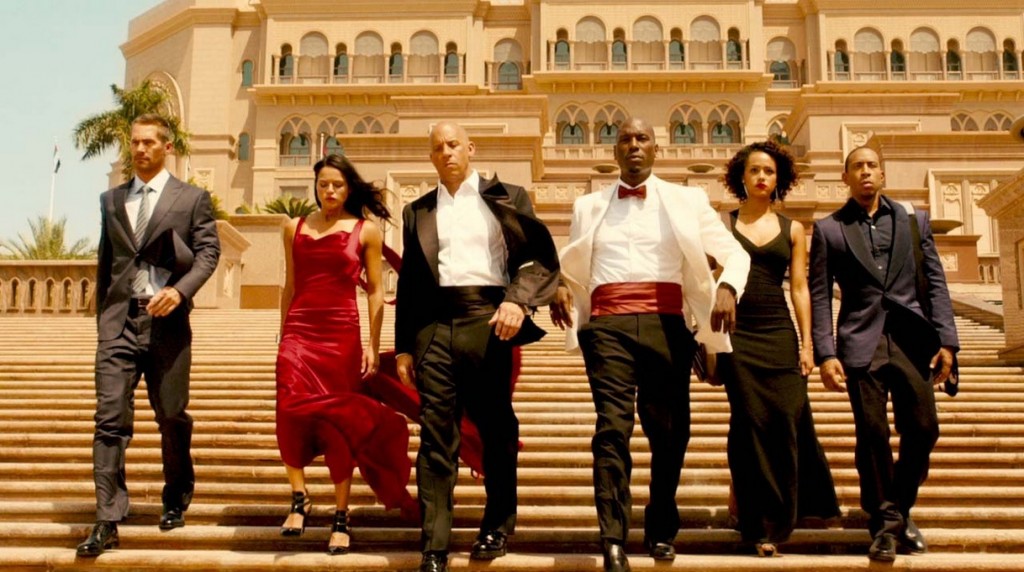 This weekend, Furious 7 very appropriately became the fastest movie ever to gross $1 billion at the box office and was Universal’s first movie to make that much money in the studio’s 103-year history.

NBC Universal Vice Chairman Ron Meyer made the announcement on Friday, before the movie had another full weekend of earning $29 million more in theaters, according to Box Office Mojo. It only took 17 days for the movie to cross the $1 billion line, and it’s the first film since last year’s Transformers: Age of Extinction to do so. In the process, the seventh installment in the Fast and Furious franchise steamrolled competition, including an extremely disappointing debut from the Russian spy thriller Child 44.

“Today FURIOUS 7 will reach $1 billion in worldwide box office grosses. This is the first time in Universal’s 103-year history that we have had a film achieve this level of success in its first run. It will certainly exceed this number as well as have the distinction of being the quickest of any film to reach this milestone in just 17 days,” Meyer said Friday, per Deadline.

Furious 7 has benefited from being a part of a solid franchise that people love despite the fact that the films fail with critics. The movies revolve more around watching death-defying stunts and souped-up cars than actual plot or believable dialogue, which audiences seem to enjoy in Fast and Furious film after Fast and Furious film. This installment in particular gained a lot of attention from the death of Paul Walker in November 2013.

After he tragically died in a car accident, filming was shut down and the release date was pushed back almost a full year. Furious 7 uses the footage he had shot, plus CGI, to finish the scenes he hadn’t yet completed. That attention, in addition to aggressive social media campaigns from stars Dwayne “The Rock” Johnson and Vin Diesel, helped drive fans into theaters to see the seventh Furious film.

Having the film come out on April 3 gave it almost an entire month in theaters before Marvel debuts its tentpole Avengers: The Age of Ultron, which could well be the next movie to make $1 billion. Furious 7 will likely be the No. 1 movie during that entire four weeks.

This weekend’s box office stats illustrate how adult storytelling is moving from the big to the small screens; there’s seemingly little place for a big-budget, grown-up movie in the multiplex anymore. The success of Furious 7 versus the epic failure of the new Tom Hardy-starring spy thriller Child 44 shows that maybe there isn’t an audience for movies aimed at adults with big budgets and serious story lines.

While Furious 7 continued to rake in the dough, Child 44 only made $600,000 domestically and $2.1 million internationally on a budget of $50 million, per Box Office Mojo. Some chalked this up to bad reviews, which resulted in a 25% rating from Rotten Tomatoes, and others said there’s just no audience for non-franchise movies with this kind of budget in theaters anymore. Something like this would perhaps be more appropriate for television screens than the silver screen.

“When you’re spending $50 million on an adult drama, you have to be sure you have the right pieces in place to pull it off,” said Jeff Bock, an analyst with Exhibitor Relations, to Variety. “In this day and age, if it’s not produced by Steven Spielberg or directed by Angelina Jolie, it’s not going to make it. It’s just going to look like the kind of thing you see in Redbox that never made it to theaters.”

Now that weekend box office numbers are in, many have been wondering why Child 44 failed. It had a decent amount of star power with a well-received performance from Tom Hardy leading the film — this was the one thing about the movie that critics praised. More and more people seem to be saving the theater for those special effects-laden films that you really need the big screen to enjoy, while more adult storytelling can be relished just as well as home on a television screen.

As this change becomes more pronounced, projects with big names attached that are almost guaranteed an Oscar before anyone even sees them might be the only serious adult entertainment that makes it to the movie theater.